Will you pray for Iraq?

Iraq Partnership Network seeks congregations in the U.S. to pray for cities in Iraq

In response to an invitation from the pastor of the Presbyterian church in Baghdad, the Rev. Dr. Joanne Sizoo, pastor of Grace Presbyterian Church in Fort Mill, South Carolina, and coordinator of the Iraq Partnership Network (IPN), is requesting that every city in Iraq be covered in prayer by congregations in the U.S. 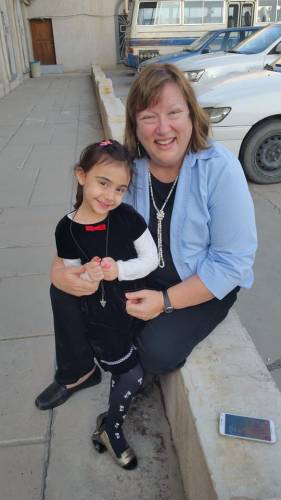 “We need congregations to help us,” said Sizoo, who has visited Iraq twice in the past three years. “Tell your congregation, ‘We’re going to pray for … Sulaymaniyah or the name of the city you’re assigned.’”

The IPN has been connecting Christians in Iraq and the U.S. in partnership for more than a decade. Through the network, participating congregations will be assigned a specific Iraqi city to pray for, for at least one year. Some suggestions for prayer topics also will be offered.

“Some cities have no known Christians and some have active congregations,” Sizoo said. “We believe God is working throughout Iraq, in ways known and unknown.”

Two of the five original churches in Iraq founded through the United Mission to Mesopotamia are no longer able to meet for worship, according to the Rev. Elmarie Parker, PC(USA) regional liaison in Iraq, Syria and Lebanon, who serves with her husband, Scott, who is a PC(USA) associate for ecumenical partnerships.

There are three remaining Reformed-heritage churches in the war-torn cities of Baghdad, Kirkuk and Basra. Despite the danger and violence, members have gathered together and prayed, “Lord, how may we be of service to you at this time?” Elmarie said, “I find that absolutely incredible.” They have continued to serve Christians and Muslims with open hearts through a variety of ministries reaching out to their communities.

Thousands of internally displaced families have taken refuge in the cities of Kirkuk and Baghdad. “PC(USA) partners were in a position of needing to respond, literally overnight, to the needs of these families,” Elmarie said, telling the story of the Presbyterian church in Kirkuk.

When a knock came on the door of the Kirkuk church, the pastor and his wife were afraid but they prayed, “Jesus, what would you have us to do?” Feeling called to open the door, they encountered a young Orthodox father with three young children. After walking from Mosul — a distance that would take at least two hours by car — with just the clothes on their back, this family became the first of 16 families, 65 people, who came to call the Kirkuk church their home. 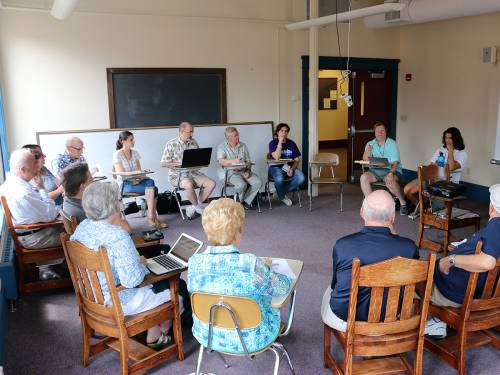 In addition to meeting the immediate needs of displaced families, these three churches also have a vision for the long-term welfare of Iraq: to build up children through education so they will have an impact on the country, to see churches grow and to provide support in leadership development to sustain these churches.

A Presbyterian pastor from Iraq, visiting America for the first time in July, said violence, persecution and fear have resulted in a Christian migration from Iraq, with more than 80 percent of the Christians leaving the country for the United States, Australia, Europe, Jordan, Lebanon and Turkey.

“We still have a remnant of the faithful who need people to pray for us. Pray we keep our head above water,” he said. The IPN, a collaborative of the Presbyterian Church (U.S.A.), the Reformed Church in America and the United Church of Christ, works to support the Iraqi Presbyterian churches they helped to establish through the United Mission to Mesopotamia. Through the network, PC(USA) congregations are helping to support the schools operated by the Iraqi Presbyterian churches and to support the work of these congregations in responding to the needs of thousands of internally displaced Iraqi families. The network also advocates for refugees admitted to the U.S.

Gracious Lord, continue to equip and empower your followers in Iraq to join you in preaching good news to the poor, proclaiming release to the prisoners and recovery of sight to the blind, liberating the oppressed, and proclaiming the year of the Lord’s favor. Amen.