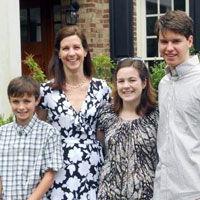 Lucy Crain with her children (from left) Jacob, Catie, and Thomas on Easter 2016

While there may no longer be a standard path for those who enter seminary, Lucy Crain’s journey has taken her to places few will ever see. The second year student at Union Presbyterian Seminary’s satellite campus in Charlotte, North Carolina, says until recently she never anticipated she’d be studying for ministry.

A child and family therapist by training, Crain and her husband, Jim, moved to Charlotte in the late 1990s to open a restaurant franchise. She left her therapy practice and together they ran the restaurant for 14 years.

“I wasn’t looking for any sort of career change because I really thought [running the restaurant] took both of us,” she says. That is, until tragedy struck the family.

“Our son was hit on his way to school one day,” she recalls, detailing the February 2012 auto collision that would change so many things for the Crain family. “He wasn’t supposed to wake up from the coma or wake up with any cognitive ability.”

Hospitalized for 77 days, Crain’s son Thomas had suffered a traumatic brain injury, requiring round-the-clock care and careful monitoring during his time in the hospital and throughout recovery. It was an exhausting job, and Crain left the restaurant to care for her son.

Covenant Presbyterian Church, the Crains’ church, is within walking distance of CNC Medical Center, where Thomas was hospitalized. The family frequently used the church as a place to rest and refresh between hospital visits and the hundreds of post-hospitalization therapy appointments.

“They loved us so well through that—in 100 different ways,” she says of the church’s support, which included prayer vigils, visitation, and decorating Thomas’ hospital room. 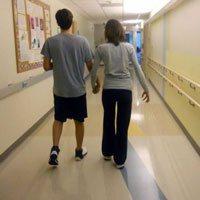 Thomas takes his first steps down the hospital hallway with Lucy the day before Easter 2012.

Thomas awoke from his coma the day before Easter 2012, and senior minister Bob Henderson changed his Easter sermon at the last minute to feature a picture of Crain and Thomas walking down the hallway of the hospital. Crain says it was a true resurrection moment for the church that had followed Thomas’s hospitalization and her journey with him.

Crain decided not to return to work at the restaurant and began volunteering at Covenant as a Stephen Minister. Within months, the church administrator asked Crain to come work at the church as the executive assistant to the senior minister. She agreed to fill the role temporarily. Three years later, she says, “I’m still there. That became permanent.”

As Henderson was preparing to take sabbatical leave, Crain approached him and said she was interested in taking a class at Union’s Charlotte campus. Henderson’s response, she says, was “What the heck took you so long? It’s obviously where you’ve been headed since you came to work here.”

Crain enrolled part time at Union’s Charlotte campus last fall, dipping her toe in the water with one course initially. Her first course was “Christian Encounters with World Religions,” and her class visited a mosque, Buddhist temple, and Sikh house of worship, among others.

“I fell in love with studying about it, learning about it, and writing about it,” she says. “I wrote my first research paper in 30 years and then decided to enroll full time.”

“I’d never thought of ministry as a goal,” Crain says of her career aspirations, quickly adding that she’s still unsure. “In fact, I feel wigged out about saying it’s a goal now. People ask, ‘Aren’t you in seminary?’ And I say, ‘I’m taking some classes.’

“I’m not taking them with any other goal in my head other than that nagging voice that kept saying, ‘You’ve got to go to seminary.’ I’m not going for a particular job or direction; I’m just being way more open to where God is leading me than where I used to be.”

Gracious God, fill us with power to proclaim your name boldly at every age, until all come to the knowledge and love of your Son, Jesus Christ our Lord. Amen.