New worshiping community is A Work in Progress 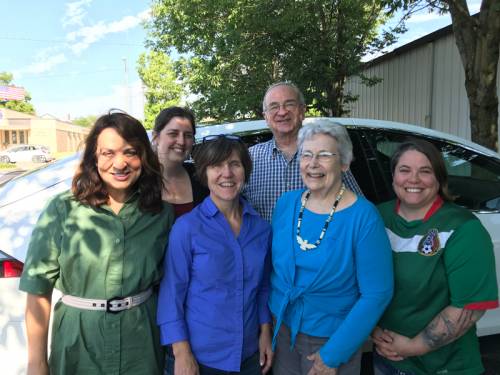 The Rev. Susan Brouillette, a new leader in the 1001 worshiping community movement, hopes to create a community for those who are spiritual but not religious and want to make the world a better place.

Brouillette is beginning to get together with leadership team members to hone their vision for their new 1001 new worshiping community, A Work in Progress.

“I see it as radically welcoming and accepting,” she said, “for everyone, especially those not comfortable in a traditional church.”

“People going through immigration are very scared and vulnerable,” she said. “I don’t feel like starting a new worshiping community is a shift or change. It’s just a natural extension, preparing me for what is next.”

Brouillette was one of 12 female leaders honored in Lafayette as part of the YWCA Salute to Women class of 2020. At that event, Joe Micon, who retired in March 2020 as LUM executive director, said that most of immigrants and asylum seekers coming to the clinic are “in serious straits.”

“Some are without family or friends,” he said. “In Susan Brouillette, they have found an advocate who represents and defends them with skill and commitment. She is one of those rare and extraordinary individuals responsible for making our community such a diverse and welcoming place.”

Brouillette spent most of her life in traditional Presbyterian churches. While she still goes to church nearly every Sunday, she feels like there’s a gap between what she experiences on Sunday and what she has experienced in the secular world.

“It’s like the church is fearful of outsiders,” she said, “instead of inviting them into the community and engaging them.”

Coming from a rural area — the town of 2,000 people Brouillette grew up in is 30 miles from Lafayette — Brouillette believes the new worshiping community movement, which draws from many different people, can be prophetic for the entire church.

“It’s easy to say the world has passed us by, instead of saying I have responsibility to engage it with what I’ve been given,” she said. “I feel this sense of call to create conversations that lead to understanding others.”

With A Work in Progress, she hopes to speak truth to power and to “comfort the afflicted and afflict the comfortable.”

“I don’t see this as a risk, but as another way to be faithful to God,” she said. “Because of my secular work experience, I don’t need to prove myself. I’m trying to lay the groundwork for others to follow and see new life.”

Recently A Work in Progress received a $10,000 seed grant from Mission Program Grants, which are made available through the Racial Equity & Women’s Intercultural Ministries of the Presbyterian Mission Agency. The grants support the transforming work of new worshiping communities and mid councils.

You, O God, raise us from despondence to praise. In spite of our failings, you are faithful, seeking after every one of your children. We join with all who call on Jesus’ name, thankful that our story begins and ends in you. Amen.