Portal enables the camp experience even during the pandemic 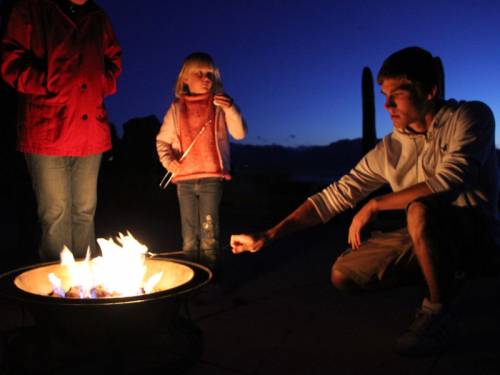 “Kids are craving the traditions and rituals they do at camp every year,” says Stephanie Fritz, associate coordinator for Christian Formation in the Presbyterian Mission Agency. (Contributed photo)

This past spring, Joel Winchip, executive director of Presbyterian Church Camp & Conference Association (PCCCA), wasn’t sure what camps would be able to do about offering summer programming.

“Summer camp face to face was already in question at that point,” he said.

Winchip contacted web developer Worship Times, asking about the possibility of developing a virtual camp portal website that could be used by PCCCA members and other denominations. Then he reached out to Stephanie Fritz, the associate coordinator for Christian Formation (CF) in the Presbyterian Mission Agency.

PCCCA is one of five partners in the Christian Formation Collective, which CF supports by partnering on projects that support age and stage formation in the Presbyterian Church (U.S.A.) With mission priorities changing in the midst of COVID-19, Fritz was able to shift dollars from a PCCCA project that involved travel to support the creation of the virtual camp portal website.

Fritz said CF had been asked to use its resources to figure out ways to help its partners continue in ministry in the midst of the COVID-19 crisis. PCCCA was looking for safe options to support their camps.

“Here was a collaborative project that met the criteria and encouraged camps to do something new and different,” Fritz said.

With the partnership in place, Worship Times built a password-protected virtual camp portal, which gives each camp control over how and what campers can see. The customized portal also gives camps the flexibility to serve as many age groups as they want — and as many campers as they want per session. Plus, there’s a shared library of content, so camps can choose content that is right for them or produce their own.

In early summer, 45 users were already on the portal. Many planned to hold their traditional one-week-at-a-time camp experiences, and some planned to offer family weekend programs as well.

According to Winchip, one camp wanted to use it in conjunction with “camp in a box” materials sent to campers, which they could use in their physical and virtual space. And some Presbyterian camps planned to better connect with campers and their families in the fall.

Before COVID-19, Winchip said camps’ relationships with parents and guardians were for the most part arm’s-length.  They’d drop and pick up their campers without much interaction with staff. More recently, parents were seeking a much more active role in the camp and its livelihood.

This year’s “This is Our Prayer” curriculum developed by Inside Out came with video presentations that could be seamlessly used on the portal. Its devotionals this year were not just for the camper — instead, they were family devotionals.

“It’s more intergenerational in how it’s connecting families in a new way to camp beyond the pandemic,” Fritz said.

The virtual camp portal also allowed camps to continue to engage young adults in leadership. Camps using the portal brought in summer staff to help run Zoom calls in order to produce and handle all the pieces that go into a person-to-person camp, virtually — which Fritz said are skills young adults already have.

“Kids are craving the traditions and rituals they do at camp every year,” she said.

According to Winchip, most PCCCA members were not doing face-to-face camp this past summer.

Click here for a mockup of what a virtual camp experience looks like. Be sure to watch the “Camp Fun” video to see why kids were so anxious to interact with their camp leaders in virtual space.

Lord, thank you for experiences that open our eyes to more clearly see you, and our ears to more clearly hear you. Expose in us those things that keep us from coming to you. Open our hearts and make us unafraid to be vulnerable. May we have encounters that will change us forever and move us in the direction where you are leading. Amen.