Air Force Chief of Chaplains has retired, but not from ‘soul care’ 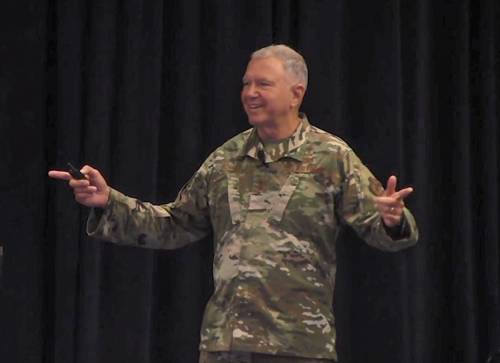 Chief of Chaplains Major General Steven Schaick tells members of the Air Force Chaplain Corps, “We prove our net worth by caring for Airmen, by being there, fully present with them, and saying, ‘You know what, your life, your story matters.’” (Screenshot)

Schaick was appointed in August 2018 as the 19th U.S. Air Force Chief of Chaplains, the most senior chaplain role in the entire Air Force. As Chief of Chaplains, he is a member of the special staff advising the U.S. Air Force Chief of Staff on all matters of religious and moral welfare to Air and Space Force personnel. He is responsible for establishing programs to effectively meet the religious needs of Air and Space Force members and their families. He serves as senior pastor for more than 770,000 active duty, Guard, Reserve and civilian forces in the U.S. and overseas; leads approximately 2,200 chaplains and religious affairs Airmen from active duty and Air Reserve components of the Air Force Chaplain Corps; and serves as a member of the Armed Forces Chaplains Board, which advises the U.S. Secretary of Defense and the Joint Chiefs of Staff on religious, ethical and quality-of-life concerns.

Prior to his current assignment, Schaick served as the 25th U.S. Air Force deputy chief of chaplains, the second senior-most chaplain in the Air Force. He can trace his call to ministry back to his growing up years in Oshkosh, Wisconsin. His parents influenced him by loving God and family and being very moral, ethical and God-fearing people. He was also inspired by the pastor of his home church, Rev. Rapp, whom everyone referred to as “Rev.,” a big man physically and also big in heart, mind, soul and spirit. “I loved this guy and was always intrigued by who he was, who he had become, and the call that he had answered as a young boy,” Schaick said.

After high school, it was the educational benefits that first attracted Schaick to enlisting in the Air Force. He trained in integrated avionics and became an F-15 avionics specialist. It was during these first four years of his career that he became increasingly interested in the intersection of sound theology and ethical living. Mentors like Major Bob Foster, who led the Navigators Bible Study, took special interest, teaching him how to apply the Scriptures to his life. Staff Sergeant Jim DeSantis took 19-year-old Schaick under his wing and encouraged him to consider options and think long term.

“My collection of mentors is just so deep and rich,” Schaick said. “I’d been flying airplanes ever since I was about 17 years old, and even though I had a pitiful GPA and I was just floundering in the engineering program at the University of Wisconsin, the Air Force said they wanted to make me a pilot. I was absolutely elated,” he remembers. “I saw my dream come true.” He also met his future wife at the University of Wisconsin.

Schaick attended a mission conference in Champaign-Urbana, Illinois with fellow members of his Navigators Bible study group a couple months after he received this news from the Air Force. The last speaker of a three-day conference was “a guy by the name of Billy Graham.”

“I’ll never forget it,” Schaick said. “Billy Graham was used by God to speak to a lot of hearts, including my own. I felt, for the first time, a powerful call to ministry.” Afterward, he remembers feeling angry and arguing with God, hoping what he was experiencing was just some kind of emotional thing that would go away.

“I did not want to let go of my pilot opportunities, my flying opportunities for the Air Force,” Schaick said. Instead of fading, his call to ministry “just got stronger and stronger.”

“I turned down my pilot slot with the Air Force, removed myself from ROTC, and set my sights on seminary,” Schaick said.

He earned his Master of Divinity degree in 1986 at McCormick Theological Seminary, a Presbyterian theological school in Chicago. One year prior, he had been commissioned in the Air Force Reserve as a chaplain candidate and, in 1988, he was commissioned into active-duty chaplaincy.

Gracious and loving God, your Son multiplied a few disciples into a great and mighty force in the world. Use us so that we might, by the power of the Spirit, share Christ’s joy by extending this great witness in our own day. Amen.