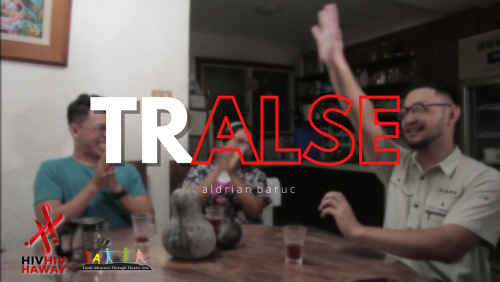 Last September, the Youth Advocates Through Theater Arts, a group of thespians I work with, organized a webinar titled HIV HIV Haway (Haway is a local term that means “leave”). YATTA had partnered with the U.N. Population Fund, the Center for Health Solutions and Innovations Philippines and Y-PEER Pilipinas to promote HIV Combination Prevention. The initiative came with the assessment that the Philippines had one of the fastest-growing HIV epidemics in the world, mostly affecting young, marginalized people not easily reached by mainstream health services and programs.

As part of the program, YATTA produced three recorded videos of five-minute skits. The first scenario explored a couple’s first night of intimacy after four years of abstinence. They realize, though, that the condom had expired and had a hole. The second scenario showed three friends openly sharing about their lives, including their intimate relationships. One of them talked about having an HIV test earlier that day and meeting a person that the other two in the group had sexual relationships with. The information led to malicious assumptions and shaming of the person. In the third scenario, Alec just found out that he is positive for HIV. Distraught and unsure of his future, he decided to burn bridges with his partner.

The scenarios were meant to present an undesirable situation, to provoke discussion and seek better models of thinking and practices that are informed and come from a place of kindness. So, in breakout rooms, participants were asked whether they agreed with the characters, and if not, what they would do differently. They were asked to rewrite the scripts, so to speak.

There is much rewriting to do to achieve a wholistic approach in addressing HIV/AIDS.

Dear God, grant us the compassion and courage to follow Jesus’ example to care for the sick and to love one another with all our heart, all our soul and all our mind.

God of Life, we pray for those in our community and around the world who are infected and affected by HIV and AIDS. We pray that our church may be a place of compassion and protection for those in desperate need of healing. Amen.