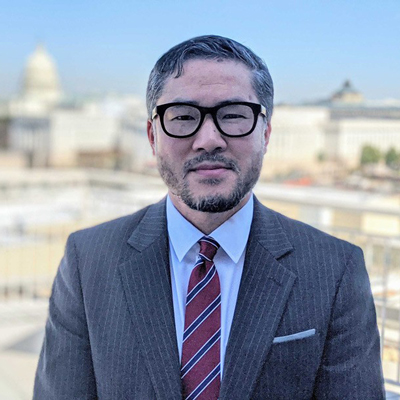 Had he been told in advance about the death and heartache wreaked by the pandemic, the Jan. 6 insurrection at the Capitol and the killings of people of color over the past months, “I’d be tempted to run away, to cower in anxiety and fear,” the Rev. Eugene Cho, president and chief executive officer of Bread for the World, said during a sermon featured in the recent Festival of Homiletics. “I’m grateful that God, out of God’s goodness and grace, has invited all of us to be leaders in a church that serves through humble servant leadership.”

The sermon text for Cho’s sermon, which he titled “The Whole Gospel,” was John 4:1–4, the preamble to the story of Jesus speaking to the Samaritan woman at the well, where we’re told by the gospel writer that Jesus left Judea and started back to Galilee, “but he had to go through Samaria.”

“Even as we open up God’s Word and proclaim the good news, as we acknowledge the pain and injustice and brokenness of the world,” Cho told the preachers and others in attendance during the online festival, “may we always proclaim the good news that that tomb is still empty … and that our God remains in control.”

Cho founded and for 18 years was senior pastor at Quest Church in Seattle. He was also the founder and visionary of One Day’s Wages, a grassroots movement of people, stories and actions to alleviate extreme global poverty.

As a “professing evangelical, I am often asked this question,” Cho said. “What’s more important — evangelism or justice?”

Those are not “competing commands,” Cho said. “The Great Commission and the greatest commandment are not two separate invitations. But they constitute the whole gospel, the main thing. If we are faithful preachers, we must pursue and embody both of these things.”

Turning to his sermon’s scriptural text, Cho focused on verse 4: “But [Jesus] had to go through Samaria.”

“He didn’t have to do anything. He’s Jesus,” Cho said. “It gives us a glimpse of his character.” At the time, Jews traveling between Judea and Galilee would have taken “a long, circuitous route” to avoid traveling through Samaria, “a journey that took nearly three times longer than going in a straight line. If there were such a thing as hashtags during the time of Jesus, it would have stated ‘#samaritanlivesmatter.’”

“Jesus went to Samaria to shepherd this woman, to speak life into this woman, to share with her that she is fully created in the image of God and is wonderfully and fearfully made,” Cho said. “Jesus declared to her that, ‘You have been seeking worth and value here and there,’ but Jesus is the living water able to quench our deepest thirst.”

Surveys indicate 1 in 5 Baby Boomers believe evangelism is the wrong thing to do, and among Millennials, it’s nearly half, according to Cho. “We have to name and repent of the harmful ways the church engaged in evangelism in ways that were antithetical to the kingdom of God,” Cho said. “We have to name the colonization, the ways we acted that were contrary, so that we can repent, confess and learn from our mistakes — and not grow weary of entering Samaria to share the good news that Jesus Christ is the living water.”

During Holy Week, “Jesus didn’t just enter Jerusalem and go straight to the cross,” Cho noted. “He confronts hypocrisy, heals, hosts a meal and washes dirty feet. The kingdom of God is about life on Earth as well as eternity in heaven. It doesn’t just revolve around you.”

“If we are honest, we are all seduced by the temptation of making entertaining sermons to speak to a consumeristic culture. Friends, that’s a false gospel,” Cho said. “May our proclamation also bear witness to God’s love for the world,” including pursuing justice. “Reconciliation matters, Black and brown bodies matter, the oppressed matter to God and the dignity of every single human being matters to God.”

O God, you sojourn with us to new places. Hold us in your hand through the uncertainty of life. Guide us to be your presence to those in need and agents of your enduring peace. Amen.