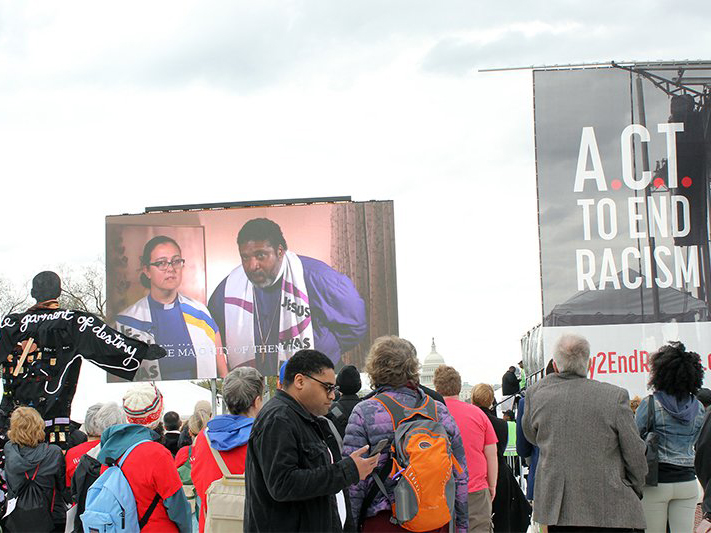 The Rev. Liz Theoharis the the Rev. William Barber II, co-chairs of The Poor People’s Campaign: A National Call for Moral Renewal, speak via video at the A.C.T. to end Racism Rally on April 4, 2018 in Washington. (Photo by Adelle M. Banks)

They began marching just after dawn from the Martin Luther King Jr. Memorial, 50 years to the day after the civil rights leader was assassinated.

They silenced their voices and, walking to the beat of a drum, traveled halfway down the National Mall. They then prayed a spectrum of prayers — from Anglican to Zoroastrian — before they settled in for a set of speeches with a lofty subject: ending racism.

The A.C.T. to End Racism Rally, seeking to “awaken, confront and transform” society about racism, drew thousands of people to the nation’s capital in April. It was one of the largest events ever planned by the National Council of Churches, an ecumenical network of 38 groups including mainline, Orthodox, black Protestant and Quaker churches. A contingent of Presbyterian Church (U.S.A.) leaders that included Stated Clerk the Rev. Dr. J. Herbert Nelson, II, and the Rev. Jimmie Hawkins, director of the Presbyterian Office of Public Witness, was on hand for the rally.

“It was Dr. King who talked about the three evils that stand in our way, and we can call them the three weapons of mass destruction,” said the Rev. Toussaint King Hill Jr., pastor of West Hunter Street Baptist Church in Atlanta and a cousin of King. “We can say racism, we can say economic inequality and we can say militarism. Those three evils still permeate our land.”

Speaker after speaker throughout the day said King’s vision had not been realized and it was up to leaders of houses of worship to act directly to achieve his goals, most especially on combating racism, so the people over whom those leaders have influence won’t ignore its presence in society.

Between a Baltimore boys’ choir singing “I Have a Dream” and gospel artist Yolanda Adams performing “I’ve Got the Victory,” people listening took time out to talk about their personal next steps for addressing racism.

The Rev. Rob Keithan of All Souls Church Unitarian, a Washington congregation that has held a course to help whites become allies of blacks, plans a series of multicultural “beloved conversations” in line with King’s notion of a “beloved community.” Keithan embraces the NCC’s plans for a multiyear truth and reconciliation process.

“South Africa did this work long ago,” he said. “The United States still has not done the work it needs to do.” 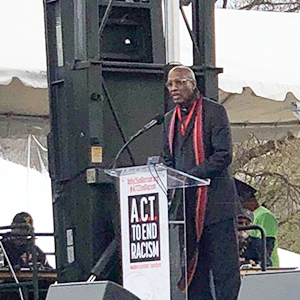 Supporters ranged from Catholics to evangelicals who are part of social justice networks.

A Christian Church (Disciples of Christ) clergyman from the Midwest talked of working harder to recruit people of color as ministers.

“Everybody’s got to be at the table,” said the Rev. Bill Spangler-Dunning, Upper Midwest regional minister for the denomination. “It’s not the whole body of Christ.”

The night before the event on the Mall, some ralliers who arrived early sat beneath the Byzantine dome and icons of Washington’s St. Sophia Greek Orthodox Cathedral and were told that the notion of ending racism should not be considered an impossible task.

“Certainly, ending racism might seem like an aspiration but, like the very first disciples, we followers of Jesus are called to bear witness to something that the world cannot yet believe is possible,” said the Rev. Sharon Watkins, director of the NCC’s Truth and Racial Justice Initiative and the president of the Christian Church (Disciples of Christ). “We are called to say this can happen. Racism can end.”

Fifteen-year-olds Lily Quintero and Margaret Holland, who traveled from Vermont with their multicultural United Church of Christ youth group, were impressed to hear white people like Watkins — and other perfect strangers — addressing a cause long a concern for them as teens with mixed racial backgrounds.

“It’s kind of nice,” Quintero said in the balcony of the Orthodox cathedral for the “ecumenical gathering to end racism” held hours before the Mall event.

“I don’t know any of these people and they’re kind of like fighting for my cause with me,” said Holland.

Grace-bearing God, may we become heavens of hospitality, welcoming all who question, search and stumble. May our words and deeds lead those who search into your arms and into the deep and restorative love of Jesus Christ. Amen.