In a culture where women often go unheard, the fisherfolk women of Sri Lanka made certain their voices were loud and clear.

Their story began in 2010 when the Sri Lankan government, as part of its plan to attract more tourism and conference business, decided to build a seaplane project in the Negombo Lagoon.

Chemicals began to pour into the lagoon, poisoning fish and vegetation as well as endangering areas where fish spawned. Mercury was showing up in the fish. The fear was that the environmental harms would be devastating.

“The government’s plan to build hotels, spas and tourist attractions did not consider the fishermen who were already facing poverty and depended on these beaches and lagoons for their survival,” said Valery Nodem, Presbyterian Mission Agency associate for international hunger concerns. “The Presbyterian Hunger Program has been accompanying efforts like this one in the country for more than 10 years. As ministries of the Compassion, Peace & Justice area [of the Presbyterian Church (U.S.A.)], our partnership with communities in the U.S. and around the world is built around a crucial principle: listening, walking with and empowering people.”

About 15,000 fishermen and more than 3,000 families depend on that lagoon for their livelihood. Wanting to help, the fishermen’s wives began educating themselves on the project and a rebellion was born.

With the help of faith leaders and organizations like the National Fisheries Solidarity Movement (NAFSO), the women began a campaign to bring attention to the environmental and economic hardships the project would cause.

In Sri Lanka, men are the head of the household. Women care for hearth and home. When the women told their husbands they wanted to fight the project, most of the men rolled their eyes and gave their blessing, believing nothing would happen. The government thought so, too. They were both wrong. 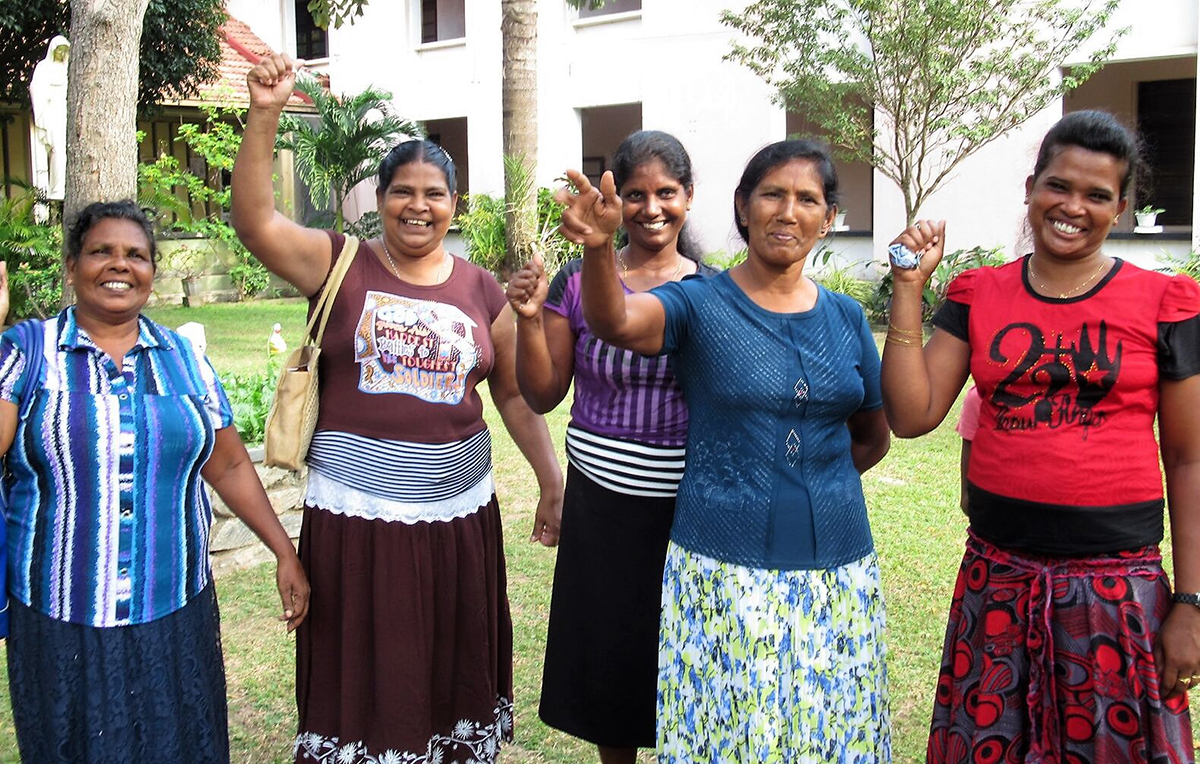 A few of the women who were instrumental in the sea plane project attended a conference in January about the Chinese Port City showing how they celebrated when their advocacy stopped the government from irreparable harm to their fishing grounds. (Photo by Kathy Melvin)

The women began to travel to the small villages around the lagoon to raise awareness of the impending harm and rally people to action. Letters were sent to the president with no response. Then a series of protests began.

The movement gained speed. In October 2010, about 2,000 fishermen, faith leaders, environmentalists, social activists and trade union members met at the parish of Kurulu Kele in Colombo and prayed for God to protect the mother lagoon and their livelihoods.

A month later, more than 8,000 fishermen and local villagers nonviolently occupied the area surrounding the lagoon, bringing business to a standstill. Hundreds sailed boats to block the construction process. Men and women laid down on the road. Women stood in the water for hours shouting, praying and singing. The protesters made it clear that the only option was the complete withdrawal of the project.

Defense minister Gotabya Rajapaksa sailed into the lagoon on a Navy boat filled with men and guns, threatening to shoot the protesters.

Herman Kumara, convener of NAFSO, said that the protesters opened their shirts and said, “Shoot us; we are ready to die today. We are doing this for our children.”

After more than 10 hours, the government agreed to suspend the project. The protesters refused to leave until the construction barge was moved.

“These women are amazing! Their testimonies and stories fill me with great hope and encouragement for them as well as for the global community of faith,” said Mienda Uriarte, coordinator for PC(USA) World Mission’s Asia and the Pacific office. “They responded from a genuine, authentic call to protect the natural resources entrusted to their care. With no economic standing and no status in the community, they stood unwaveringly in their position of powerlessness against a government and wore their courage like the badge of honor it is. We should all be so bold when faced with insurmountable odds.”

This group of women is now engaged in an active resistance against the Chinese Port City under construction on Colombo’s waterfront. The women were part of a conference in Sri Lanka in January, where concerned religious groups and nongovernmental organizations came together to discuss China’s rapidly advancing presence in the Indian Ocean and the China Sea.

When asked if their husbands would be involved, one of the women smiled and said, “They only know fishing.”

God, please stand with the people who are fighting courageous battles. Continue to give them the strength they need. Amen.