Once a refugee, now a hunger advocate

Lucy Janjigian is ‘a bit of a superhero’ 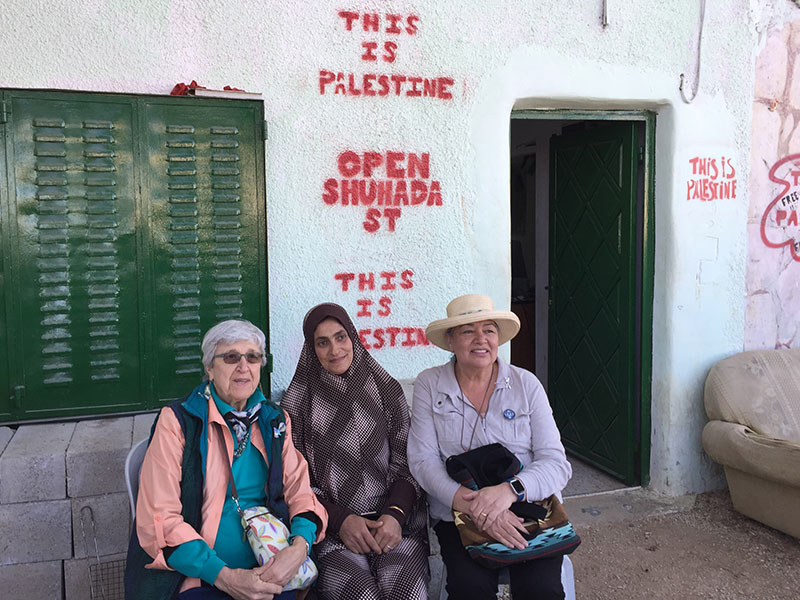 Lucy Janjigian, left, has always been interested in the lives of others. Here, she meets a new friend while on a trip to Hebron. Janjigian has spent her life seeking ways to help others. Courtesy of Lucy Janjigian

In real life, Janjigian is a bit of a superhero.

This spring, Janjigian will complete eight years of service on the Presbyterian Hunger Program’s Advisory Committee. In addition to working with PHP staff to decide program foci, the committee is responsible for distributing grants from money raised from One Great Hour of Sharing offerings to nonprofits around the world. Those grants have been for a variety of things over the years — from garden training to community organizing.

When asked how she got interested in caring for hungry people, Janjigian tells the story of being a 15-year-old in Palestine when it was partitioned in 1948. She and her family had to leave their home. Houses were demolished. Three-quarters of a million Palestinian refugees lived in tents. When she was 17, she worked with the United Nations in the refugee camps, interviewing families. She was supposed to record how many people lived in each tent, and if the family had lost a house, a job and/or income. She recalls how some of the families “borrowed grandmothers” so that they would qualify for a little more of the meager rations of flour, sugar and rice. She faithfully counted the extra grandmothers — even when she recognized them as repeats — because she believed that people should be fed and that people who were uprooted should be cared for.

Over the years, Janjigian has used her gifts and skills to connect with other people, as a refugee herself several times over. First, she and her family were uprooted from Jerusalem. Then she and her husband had to flee Lebanon to the United States before war broke out in 1958. Her husband was a successful businessman, but it was Janjigian’s science degree that got them a green card and their citizenship.

Once they settled in New York, they raised a family. Janjigian got restless and began to take painting classes. Soon she was painting the biblical stories of creation and the temptation of Eve. Later she painted haunting images of the exile of Armenians after their genocide. She hoped that those paintings would help the viewer understand the struggles of Middle Eastern survival and would particularly highlight the struggles of Armenians in diaspora. 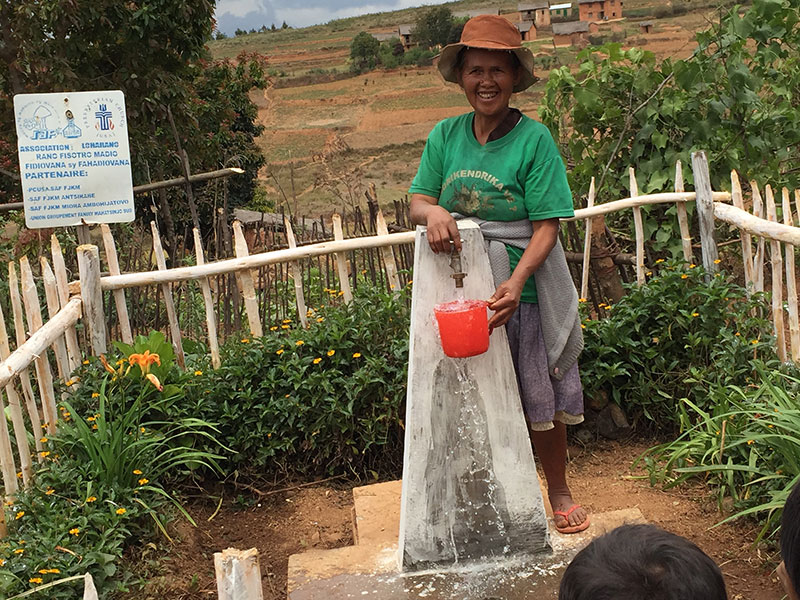 Janjigian recently visited Madagascar, where she got to see villagers, like this woman, use water spigots that were funded by the PC(USA). Lucy Janjigian

Her sense of working for justice for vulnerable people is how she ended up on the Presbyterian Hunger Program’s Advisory Committee. Eight years ago, Janjigian was serving on the Middle East caucus. The moderator at the time asked each member to consider serving on another national committee in order to impact the Presbyterian Church (U.S.A.)’s role in Middle East concerns. Janjigian, who also served on the Churchwide Coordinating Team of Presbyterian Women, knew immediately that she wanted to work on hunger, housing and water issues and convince the committee to give away as much money as possible. “If we have the money, we should give it,” she said.

After eight years, Janjigian knows that she will miss the staff and the rest of the committee, but she will continue doing her part to advocate for others. Now living in the Bay Area in Northern California, she finds that when she’s not painting, she is bringing awareness to the needs of homeless people and refugees. As she works, she holds on to hope for a world where there is affordable housing and where there is dignity of support of all vulnerable people.

Janjigian is, indeed, an ordinary superhero, and she inspires so many people to help others.

Holy God, we are grateful for the women and men who teach us to be with and care for those suffering among us. May their example ignite a fire within us to leave our places of comfort so that all may know peace. Amen.