Retired Presbyterian pastor asks congregations to give a flock

Retired Presbyterian Church (U.S.A.) pastor the Rev. Rex Wentzel, ordained in 1959, wanted to stay active in the church after he left full-time parish ministry. So like many other retired clergy, he offered his service as a supply preacher for congregations when pastors were ill, on leave or on vacation. But Wentzel wasn’t in it for the money; rather he thought it was an ideal way to promote mission in the congregations he visited.

“I do all right with my pension and Social Security, and I thought it would be a nice thing if I was asked to preach somewhere to say, ‘Don’t pay me, send something to Presbyterian mission,’” he said from his home in Sioux City, Iowa. For the past five years he has urged support for missionaries he’s met through the years or for other mission projects through these donations. But over the past seven months he’s asked churches to donate flocks of chickens from the Presbyterian Giving Catalog. 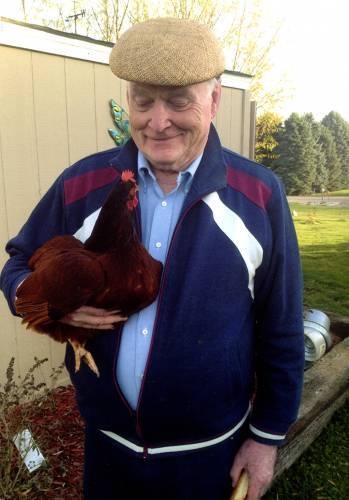 Rex Wentzel with one of his Rhode Island Red chickens.

In early 2016, Wentzel moved into a new home where the previous owners had had chickens and a coop. Not ever having been around chickens, he declined their offer to leave the chickens, but he did keep the coop.

“My daughter, who lives across the street from me, bought some chicks in April. Now I have four chickens and two ducks,” he said. “I didn’t even know how often they laid eggs. But in early August, they started laying eggs.”

“I had the Giving Catalog around, and one day I happened to see you could send chickens,” he said. “I thought, hey, I’m having fun with chickens, I’ll send some and make a contribution. The next time I preached I told [the congregation], ‘Don’t pay anything to me, send it for chickens.’ And people have been nice to do that, and it’s a fun thing to talk about.”

Inspired by the Giving Catalog’s mission of empowerment, the 82-year-old Wentzel is nearly halfway toward his lifetime goal of raising funds for 100 flocks of chickens that provide vital food and nourishment to families with the eggs they produce.

Not only are families around the world reaping the benefits of Wentzel’s generosity, but the chickens he is raising have proved good companions as well.

“I enjoy the chickens. It’s fun to throw crumbs to feed them,” he said. “I didn’t realize they are pretty tame creatures. If I need to pick one up for some reason, they seem to enjoy it. I’m having fun with the chickens.”

A prolific poet, Wentzel included this chicken-themed verse in a recently published set of his work:

Olympic runners put on quite a show; When they race they really go,
But not as fast, you should know,
As my chickens chasing crumbs I throw.

Wentzel hopes the idea will inspire congregations to be more active in using the Giving Catalog and understanding its use in mission. He noted that in some congregations where he’s preached, individuals have donated chickens in addition to the amount sent as an honorarium.

A widower of eight years, Wentzel moved back to Sioux City where he’d served in the 1980s—at the urging of an adult daughter living there—after his wife passed away. In his 50 years of full-time congregational ministry, Wentzel served seven churches, including in Iowa, Indiana, Pennsylvania, South Dakota and Wisconsin, and he remains active in the Presbytery of Prospect Hill.

This upcoming weekend is like many others for Wentzel—he’ll be filling a pulpit, this time at the First Presbyterian Church of Sioux City. Although he had not previously presented the idea of chicken donations to the congregation, he said, “They’ve already agreed that they’ll send some chicken money.”

Awareness of the need for mission funding, said Wentzel, is the goal he most hopes is transmitted by his act of generosity. Asked how long he’ll continue the fundraising effort, Wentzel is hopeful he’ll reach his objective.

“I’m expecting it to continue for some time,” he said of his 100-flock goal. “I can’t keep it going on forever, but for a while longer.”

Christ, the Bread of Life, one day as you and your disciples looked over a multitude of people, you instructed your disciples to feed the hungry. May we continue to heed your instruction, reaching out to those who hunger for bread, for community, for you. As we share food, may we all know the abundance of your love and compassion. Amen.