What’s your next step?

Over 100 people gathered in Louisville, Kentucky, on October 22 for an antiracism training event. Most participants came from congregations in the Presbytery of Mid-Kentucky; others, from the Louisville community.

Because God calls us to live together in community, the event was grounded in faith. Our scripture and confessions sound the call to live in unity as God’s children. The scripture theme for the gathering was Ephesians 4:1-3: “I therefore, the prisoner in the Lord, beg you to lead a life worthy of the calling to which you have been called, with all humility and gentleness, with patience, bearing with one another in love, making every effort to maintain the unity of the Spirit in the bond of peace.” The Confession of Belhar, with its witness to unity, reconciliation, and justice, provided the confessional grounding.

Participants reflected on their racial autobiographies, considering when they had first become aware of race and racism and how their families and faith communities had helped them understand those realities. 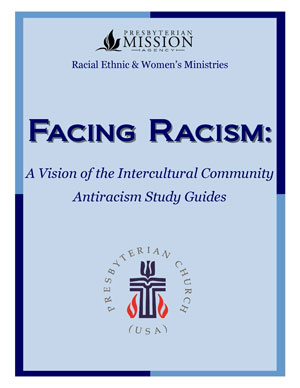 The structural, systemic nature of racism was defined and examples were provided. Participants identified ways to resist and work to dismantle racism and build the Beloved Community.

Because the work of addressing racism is never complete, lunch included the opportunity to ask the question, “What’s our next step?” Conversations focused on creating study groups, sharing worship and fellowship opportunities, and engaging with groups such as Showing Up for Racial Justice and Citizens of Louisville Organized and United Together, a congregation-based community organizing group. Those conversations continue.

The Rev. John Odom of the Presbytery of Mid-Kentucky had helped engage other congregations and the community in the event. The Rev. Alonzo Johnson, coordinator of the Self-Development of People program and a member of the Presbytery of Mid-Kentucky, was contacted to provide leadership for the content for the day. In turn, Alonzo partnered with his colleague at the Presbyterian Mission Agency, the Rev. Mark Koenig, coordinator for leader development, racial justice, and networking. The joint congregational team worked with these individuals to plan the event, which was held at Fourth Presbyterian Church.

The Confession of Belhar affirms that “unity is both a gift and an obligation for the church of Jesus Christ … and this unity must become visible so that the world may believe that separation, enmity and hatred between people and groups is sin which Christ has already conquered, and accordingly that anything which threatens this unity may have no place in the church and must be resisted.”

Presbyterians in Louisville, the Presbytery of Mid-Kentucky, and across the country are working to make that unity visible.

How are you engaged in such work? What’s your next step?

Gracious God, you create us to love you and to love one another. Guide us to dismantle racism and all systems and structures that divide and wound us. We pray in the name of Jesus, who broke down dividing walls. Amen.