As Christy Foster stood on a hillside overlooking the Guadalupe River at the Presbyterian Mo-Ranch Assembly, she remembered all at once just how much—and for how long—she had wanted to be in camp and conference ministry.

“‘God, if this is ever something you want me to do, I will do it,’” she remembers saying in the summer of 1987. “Ten years later, I was called into what became the position that I now have at Mound Ridge.”

Foster—a former risk management professional who in January 2017 will celebrate 12 years as executive director of the Mound Ridge Camp and Retreat Center—is one of only two full-time staff members at the Presbyterian-related camp in the Ozark Mountains of Missouri. The other, as it happens, is her husband, Don.

Don Foster—after having operated a chain of 10 pizza restaurants for 36 years—says that he was happy to follow his wife’s call to Mound Ridge to work alongside her as its manager of hospitality and maintenance. “I retired 11 years ago to help ‘play at camp,’” he says.

Both Christy and Don Foster were here attending “Side by Side,” the annual conference of the Presbyterian Camp and Conference Center Association (PCCCA). The 2016 gathering, held from November 6–11, was a joint event with the Outdoor Ministry Association of the United Church of Christ (OMA-UCC). 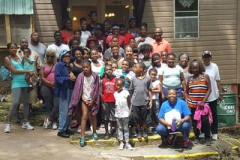 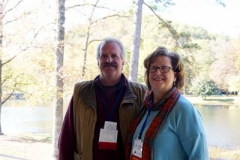 First, because the Presbytery of Giddings-Lovejoy—Mound Ridge’s former owner and operator—could no longer subsidize the needs of the camp, Mound Ridge pursued separate incorporation as a 501(c)(3), a status that took effect on July 28. Second, because Christy Foster is a ruling elder and deacon who comes from three generations
of Presbyterian pastors, she is a firm believer in doing ministry in partnership, including—and especially—with kindred camps and conference centers.

When she heard through Facebook that the Missouri Conference of the United Methodist Church was closing all four of its camps in the state, Foster responded with a post on Facebook empathizing with their situation, letting them know that Mound Ridge was there for them should they need anything, and assuring them that the Presbyterian retreat center was standing with them in prayer.

As a result of that one post, a partnership was born.

“One of our pastors in Southeast Missouri who was connected with a Methodist pastor from one of the camps that closed saw the Facebook post,” Christy Foster explains. “After those two pastors talked, we received a phone call asking what Mound Ridge could do for the Methodist Conference, what would the prices be, and what were the dates that they could have. So we all sat down—Don and two other people in the office—and we just pulled it all together and sent a proposal to them and the Mound Ridge board at the same time. Not long afterwards we received six of their camp sessions and became the traditional, residential camp for several of their programs.”

As she contemplates the camp’s future outlook and the continued blossoming and growth of its partnership with the United Methodist Conference, Christy Foster waxes theological.

“Here’s something that was dying and that was being cut away, and here’s something over here that we’re trying to cultivate and continue to grow,” she says. “Through the death of their outdoor ministry and their changing what they wanted to do, here we were—and they joined with us—which helps us to survive and thrive a little bit more. That’s the piece that’s in my heart and on my mind—how something that is merged can become a healthier system.”

“And between the two,” adds Don Foster, “there’s the good stewardship to keep us both alive.”

And not just alive, but thriving and growing.

“We didn’t have room for them in the beginning,” explains Christy Foster. “Then we had a donor who said, ‘Let’s make this happen,’ and, through his generosity, we got the 22 more beds that we needed to make it happen with the Methodists. And now to keep them we have to get another one or two because they’re growing. By utilizing us and by people trusting in the new way things are being done, they had an 80 percent growth in one of their camps. We had to give them more space last year.”

Because of that growth, Foster says that the two groups are now in conversation about how they might merge.

Foster says their witness and model speak volumes to the church.

“Our story,” she says, “is about who we are as Christians, and the theology behind our coming together.”

Gracious God, we give you thanks for your glorious creation and the ministry of camps and conference centers. Amen.