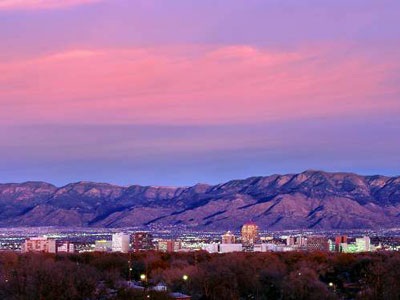 The Young Adult Volunteer (YAV) program of the Presbyterian Church (U.S.A.) has announced the addition of Albuquerque as a site for its 2017-18 program year. Partnered with the Presbytery of Santa Fe, the site has been years in development and will be the only new YAV site added in 2017-18. Seventy-nine YAVs are serving six international-based and 14 U.S.-based sites in the 2016-17 program year.

“New Mexico has a unique history in terms of multicultural life,” says the Rev. Drew Henry, pastor of Las Placitas Presbyterian Church, north of Albuquerque, who served as a YAV in Buenos Aires in 1994. “It’s a beautiful place, but also a place with great needs. Obviously Native Americans were here first and are an important part of the culture. And then Spanish settlers came, and they have been here for hundreds of years. Anglos are a more recent addition. With the addition of Hispanic migrants, you have a unique cultural mix in which to learn and serve.” 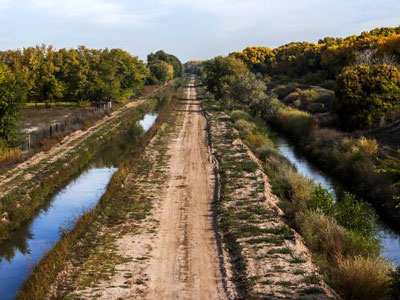 Irrigation channels in the high desert of New Mexico.

Henry notes the beautiful high desert environment around Albuquerque is an area that has one of the highest poverty and crime rates in New Mexico. “We’re not on the top of all the best lists,” he says. “YAVs are going to see the complexity of what it means to live in New Mexico.”

National YAV program director, the Rev. Richard Williams, and Henry agree the Presbytery of Santa Fe has played an integral and supportive role in establishing this new YAV site. A local organizing board of individuals in the Presbyterian Church has worked to build relationships with potential site placement agencies. They’ve also recruited local leaders who have further expanded the list of potential site placements.

“I’m confident in the work this group has done to provide placements for applicants,” says Williams. “Albuquerque has a rich multiethnic society and the experience will help YAVs explore the important question, ‘How do we live in a multicultural context?’”

One of the site’s partner agencies is the Menaul School, one of the three remaining racial ethnic schools supported by the PC(USA) Christmas Joy Offering. Educating middle and high school students, Menaul and its student body reflect the diversity of New Mexico and includes an international boarding population. It’s also where the YAVs will be housed.

“YAVs will live in the former teachers’ hall, which also houses other long-term volunteers,” says Williams. “They’ll have their own dedicated space, but will also experience living within the context of an intergenerational volunteer group.”

Other placement opportunities include:

• Camino de Vida, a new church development, which is a partnership between the PC(USA) and Evangelical Lutheran Church in America that provides worship services, Bible studies, and a variety of community programs for Spanish-speaking migrant populations;

• Heading Home, a multi-agency partnership that aims to make experiences of homelessness rare, short-lived, and non-recurring;

• La Mesa Presbyterian Church, located in Albuquerque’s International District, which is one of the city’s most diverse neighborhoods, bringing together families who have lived in NM for several generations with those who have recently resettled from across the globe; and

• St. Martin’s Hospitality Center, a 30-year-old organization providing a variety of services to homeless and near- homeless people in Albuquerque.

“We want to have the opportunity to expose YAVs to the multicultural experiences available in New Mexico,” Henry says of the diversity represented in the selected sites. “These folks have been living together for hundreds of years, and it gives a unique flavor to life in the region and to Presbyterianism in the region.”

Henry is also excited about the potential for YAVs to live and work alongside Pueblo Native Americans in Laguna Pueblo, the only pueblo where there is a PC(USA) presence. The effort to make this connection is led by Nelson Capitan, the former moderator of Santa Fe Presbytery who has been active in forming the YAV group.

In spite of downward trends in church membership and participation nationwide, Henry believes New Mexico is a place where God is continuing to work in the church and its people. “There’s a lot of vitality happening in this part of the church – and we want to expose YAVs to this vitality,” he says. “I hope the YAV experience here gives them a hopeful, although realistic, view of the church. We’re not throwing in the towel.”

Holy God, thank you for young adults who seek to serve you beyond the walls of church buildings, serving people in need in other countries and our cities. Bless them as they seek meaning, relevance, and community in our changing world. Amen.