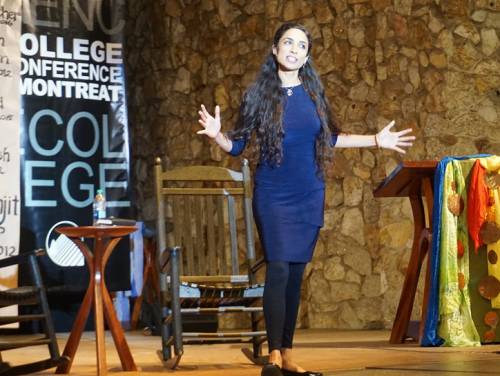 At the conclusion of Valarie Kaur’s electrifying keynote address at the College Conference at Montreat on January 4, the tandem lines on either side of Anderson Auditorium were at least ten deep with students all but on fire to have her respond to their questions.

In fact, “fire” was an operative word for Kaur, an American interfaith leader, lawyer, filmmaker, Sikh activist, and founder of The Revolutionary Love Project based at the University of Southern California. She had so galvanized the conference by charging her listeners “to have the courage to walk through those flames of hatred and bigotry and rage, and love anyway,” that attendees were eager to stay well beyond Kaur’s allotted time just to remain in her presence.

The January 2–5, 2017 conference, titled, “Beyond Babel,” based on Genesis 11:1-9—for which over 1,000 college students and their advisors gathered—was designed to help participants see in the ancient biblical text “how God gave an ancient people a holy nudge towards diversity,” while challenging them to consider how God is similarly nudging God’s people today.

During the Q&A that followed Kaur’s presentation—when she became aware that the evening’s next event was already past schedule—she asked the gathering, in an act as gracious as it was personal, for its permission to hear each of the remaining unanswered questions, learn the names of those already in line, and then answer all of them in one single response: as if by magic.

Magic—the same word she had earlier used to describe her idyllic childhood in the California farmlands, its spell all at once broken when her elementary school classmates discovered that she wasn’t a Christian and sent her home in tears. “My grandfather sat me down,” Kaur said, “and told me a story about who I was.”

As she described what she had learned from her grandfather about the beginnings of Sikhism five centuries ago in India, Kaur gave her rapt listeners helpful insights into the history of her faith tradition. She told of Guru Nanak, the founder of Sikhism, who, after emerging from a time of meditation, “began singing a song of oneness—God is one, humanity is one”— at a time when “Hindus and Sikhs were at each other’s throats.”

“When you quiet the voice within you that divides yourself from others, you lose yourself … you fall in love,” she continued, relating Nanak’s journey of discovery to her own awakening. “When you are in love, you see no strangers, no enemies. We are called to look at the faces of those who don’t look like us and say, ‘Sister, brother, I see you. I choose to love you.’ But the path of love is not easy. It is not safe. For if I see you and I choose to love you, that means I must also fight for you when you need me. Sikhs—seekers of truth—began wearing their hair long to represent their commitment to love and justice when people were in need. They became warriors.”

Kaur has characterized this type of love as “‘revolutionary love’—the kind my mother showed me, my faith taught me—to walk into fires with a warrior’s heart and a saint’s eyes and walk toward them determined to birth new possibilities.”

She said that her own “walk into the fire” began in the aftermath of 9/11 when she was a 20-year-old college student and “the fires first burned bright before my eyes.”

“I was watching the towers fall again in my mind, when an image of a man in a turban flashed on a screen,” Kaur recalled. “Suddenly our nation’s new enemy looked like my grandfather. Within moments, there was news of violence, we who were Sikhs, not Muslims, were persecuted. I was afraid, I was overwhelmed—the America I thought I knew was no longer. I ran. I returned to my bedroom for days. I turned to books, not academic books, but Harry Potter books: a story of the young people wielding a kind of magic when the adults in their lives wouldn’t or couldn’t.”

Although Kaur had neither wand nor sword like Harry Potter, she did have a camera.

“I thought about all of the stories that my grandfather passed down to me that would go invisible unless someone was recording them, telling the story,” she said. “I grabbed my camera, got in my car with my parents’ blessing, and started driving in the car toward the fires. I went from city to city, home to home, capturing the stories of my community, stories that weren’t making the evening news. The first person killed in a hate crime after 9/11 was a man I called uncle. I was there with my camera, 20 years old, trying to capture it.”

Drawing strength from a lesson she learned from Harry Potter—which resonated powerfully with her college audience—she reminded her listeners that Harry wasn’t the strongest or the smartest, but he was brave, and he didn’t do it alone. He was protected, just as she said she is “shielded by love” through ancient Sikh scriptures, and her hearers through the Christian scriptures.

“To the voice that told me to go back to where I belonged, I might have done it if I hadn’t been protected,” she said. “I’m standing here because of a love that was poured into me. There may be that voice of fear in you, but the fact that you are here tonight means that you have been loved. You are standing on a foundation of love—that love can shield you in the fire. That love can whisper to you, ‘You are brave.’”

Kaur, who had opened her presentation by sharing the story of her son’s birth—during which her mother had whispered to her laboring daughter those selfsame words, “You are brave”—again invoked her son.

“The path of revolutionary love is not safe, not easy,” she said. “All this time when I was fighting, I thought I was helping to make the nation a safer place for the next generation, and then my son was born. In that moment, holding him in my arms, I felt like I failed him. The moment I was holding him, there were people marching, chanting, ‘I can’t breathe,’ protesting the death of black lives. Then, mourning the lives of three Muslims [victims of violence], I bundled him up in my arms and I couldn’t breathe.”

In this “era of enormous rage,” Kaur said that “love is the only thing I have ever seen to create lasting change.” 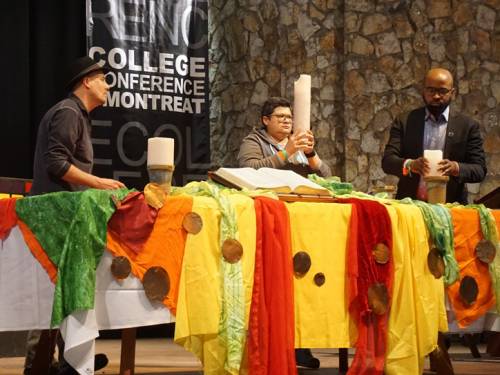 As she pointed toward the banners containing the names of victims of violence—originally created for Montreat’s 2016 DisGrace Conference: “Seeking God’s Grace Amid the Disgrace of Racism”—Kaur explained that “they are the names of my aunts and uncles.”

“I remember that there would have been more caskets if it hadn’t been for a white, Christian man named Brian Murphy, who took 15 bullets to protect my people,” she said, referencing the 2012 massacre at a Sikh temple. “He knew more people would be killed. He was willing to give his life for me, for my people.”

She described “revolutionary love” as a choice, an act of will. “It is a choice to extend the kind of love we have for our families to those outside of our tribe, to those who do not look like us, even those who hurt us,” said Kaur. “Revolutionary love can sound impossible in a time like this, when those of us who are upset by the election are tempted to embody the same rage, but it is possible because I just witnessed it.”

What she witnessed at the site of her uncle’s murder in Mesa, Arizona, was a story of forgiveness and reconciliation   on September 15, 2011, between her uncle’s younger brother, Rana, and her uncle’s murderer, Frank Roque, whom they decided to call in prison.

“How could I think this idea of revolutionary love could work in the face of a murderer?” she asked. “But Rana hears what I can’t. ‘Frank, this is the first time I ever heard you say you’re sorry.’  Frank said, ‘I’m sorry for what I did to you and your brother and your family. When I go to heaven, I will see your brother and ask for his forgiveness.’ ‘But we have already forgiven you,’ Rana said.”

Kaur closed her presentation by reminding her listeners that revolutionary love is not the absence of anger—there is a role for anger in social change work.

“It is to let anger and anguish burst forgiveness, because forgiveness is not forgetting,” she said. “Forgiveness is freedom from hate, because when we are free from hate, then we can begin to hear the story of even the murderer and those who disagree with us. Once we hear the story, then we can start to transform the communities and the cultures. You may feel in this moment that the future is dark … but what if this darkness isn’t the darkness of the tomb, but the darkness of the womb? What if America is not dead but a country waiting to be born?”

Today’s Focus:  Courage to walk through flames of hatred and bigotry and rage

Creator God, we pray for discernment and guidance as we try to walk the narrow path that has been put before us. We know that it will be difficult but that the rewards will be great. It is in your Son’s name that we pray. Amen.