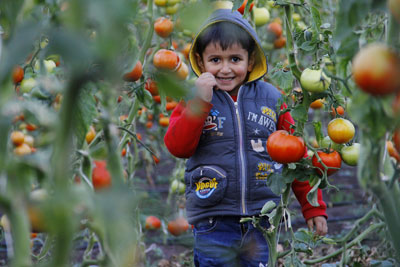 In Gavar, Armenia, a young family runs a fruitful greenhouse business thanks to a micro‐loan and mentorship through
the Jinishian Memorial Program. Photo credit: Hasmik Sevumyan, JMF

Throughout the Ottoman territories of 1915, Armenian villages were emptied out, in a systematic campaign to demean and destroy innocent victims. Although authorities in modern-day Turkey deny this genocide, historians have gathered indisputable evidence of at least a million Armenians killed and a million more dispersed from their ancient homeland, the world’s first Christian nation.

For a people who have endured genocide and communism, their faith and their future might seem tenuous. Indeed, many of today’s young adults have been demoralized, unemployed and ready to flee. Yet voices of hope and change are rising. In April 2018, peaceful protests dismantled the corrupt dictatorship and led to fair elections of new leadership.

The Jinishian Memorial Foundation in Armenia, under Presbyterian Church (U.S.A.) administration, has developed a nationwide strategy to empower young leaders. More than 70 young entrepreneurs in rural areas are using affordable loans to start their businesses; they also have a coach and technical support for five years. Since 2005, thousands of university students have learned about human rights, the economy and the environment and used small grants to tackle local problems. For example, Jinishian support helped one young man channel his expertise in radio electronics into a STEM program for dozens of youth, including many from a local orphanage.

Jinishian’s indigenous, ecumenical teams empower Armenians living in poverty throughout the Caucasus and Middle East. In Armenia 90 percent of the projects are designed to promote long-term, sustainable change so people can earn a decent living, grow healthy families and help their communities thrive. The program offers dignity and hope through relief, development and spiritual uplift.

To promote understanding of Armenian culture and history, the Jinishian Memorial Program is sponsoring a mission tour Sept. 26–Oct. 6. The “Discover Armenia Tour” will focus on culture, outreach and faith.

God, you hear our cries in the darkness. Deliver the weak from wicked hands and let your mercy bring comfort to the oppressed. Make us instruments of your peace in a world of sin and struggle. In Jesus’ name we pray. Amen.