Do you speak mission? 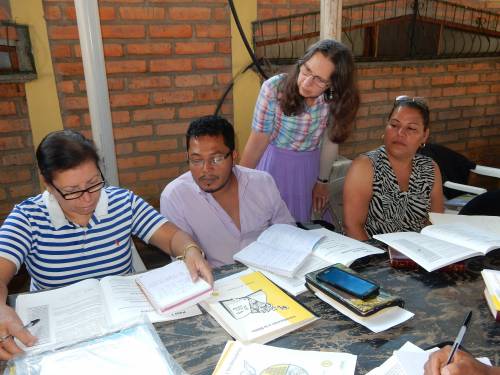 Mission co-worker Karla Ann Koll, standing, points students to where they can find answers to their questions. (Photo by Tracey King-Ortega)

Every morning when I wake up here in San Jose, Costa Rica, I wonder what the day will hold. A trip to the hospital? A phone call from a family in need of food? Over and over in recent months, I have been reminded that being a mission co-worker of the Presbyterian Church (U.S.A.) means standing alongside those in need. Accompanying vulnerable people means entering into their vulnerability and experiencing the unpredictability of life for those who have fled to a new country in search of refuge.

Since the protests that erupted in Nicaragua in mid-April 2018 were met with violence from police and paramilitary groups, more than 30,000 Nicaraguans have sought refuge in Costa Rica. Some of these refugees have fallen victim to human traffickers who take advantage of their desperation. Though I have been in Costa Rica for just a few years, I have served in mission on behalf of the PC(USA) in Central America for most of the past 30 years, including eight years in Nicaragua. These deep ties in the region have made my home a point of reference and a safe space for some Nicaraguan refugees. Mission as presence becomes possible when there are long-standing ties and webs of relationships built in trust over many years.

Mission is also about making connections across borders. Do you speak Mam? The question came to me from a former mission co-worker who served in Zambia and now lives in upstate New York. Mam is one of the many Mayan languages spoken in Guatemala, but I did not learn Mam during the 13 years I served in that country. However, I was able to connect my friend to people in the U.S. who speak Mam, including a former Young Adult Volunteer who served in Guatemala and a professor of anthropology at a Presbyterian college who is also a Presbyterian minister. My friend in New York had taken into her home a father and son from Guatemala after the father was fired from the farm where he had been working, and she wanted to be able to communicate with them.

A friend from seminary who is part of the mission committee of a PC(USA) congregation in Santa Fe, New Mexico, wrote to ask me for Nicaraguan recipes. She has taken into her home a transgender woman from Nicaragua who has been released after several months in immigration detention. Mission is about sharing plates of rice and beans around a table as well as accompanying people to court hearings in their asylum cases.

As a theological educator, I have the privilege of walking alongside women and men from the Americas as they deepen their theological reflection and develop skills for ministry. Ismael Avalos, a student from Peru, has just finished a bachelor’s thesis on homes as spaces for mission. Ismael has come to see that mission is about weaving webs of relationships that nurture people and promote justice.

We are all called to serve in Christ’s mission, wherever we happen to be.

Karla Ann Koll, PC(USA) Mission Co-Worker in Costa Rica since 2013 and professor of history, mission and religions for the Latin American Biblical University in San Jose, Costa Rica. She previously served in Nicaragua and Guatemala.

Holy God, let disciples of all nations hear your voice. Bless, O Lord, our witness to your world. May our words and deeds speak to your whole creation in all of its wonderful diversity. Amen.