Presbytery reaches out to its ‘Lonely Hearts’ 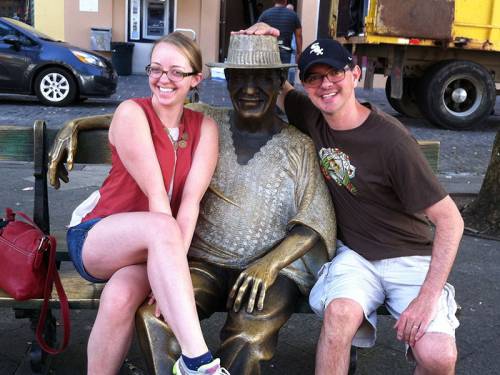 Gillian Hollis and Mark Eldred knew their careers would take them in different directions and that they would have a commuter marriage. While texting and video calls help, Eldred, a pastor in the Presbytery of the Western Reserve, is also thankful for the Lonely Hearts Club his presbytery created. Courtesy of Mark Eldred

Mark Eldred had been singing in the choir at Fourth Presbyterian Church for six years when love struck.

A new season had begun, and Gillian Hollis walked into rehearsal after moving to Chicago to pursue her master’s degree at Northwestern. She took her place in the soprano section among several other new members. Eldred was drawn to her and managed to overhear her talking about swimming with one of the other choir members. As he approached her, he decided to introduce himself as a fellow swimmer. Six months later, they were dating. Today, they have been married for six years.

From the start, they knew their marriage would be different. He was in seminary and didn’t know where he would be called to serve. She was starting her singing career and would be traveling around the country to sing with different groups. While they suspected that they would be apart for months at a time, they still committed to marriage. Sure enough, Eldred got his call to serve in Cleveland just as her career started to take off. They have a commuter marriage: He stays in Cleveland while she travels to different cities.

“We no longer live in a world where couples have only one person with a career,” Eldred said. “Because I love her, I want her to succeed in her vocation, not just follow me around and take whatever job she can find.”

Hollis said it never crossed her mind not to get married, even though they knew they would live apart.

“It’s pretty tough to ‘make it’ in my business, so truly there is no reason to put the rest of one’s life on hold,” she said. “I am incredibly lucky to have found a wonderful partner in Mark. He knows my work as well as I do and understands what it takes, including lots of travel. As the daughter of pastors, I understand and share the sacrifices and commitments he must make as a minister.”

Eldred and Hollis are not alone in the way they approach marriage and career. In 2017, commuter marriages were up about 17 percent over 2001, according to the U.S. Census Bureau. That’s about 3.5 million couples in the United States who are married but living apart for reasons other than legal separation.

Several of Eldred’s peers in the Presbytery of the Western Reserve are also in commuter marriages. General Presbyter Sharon Core works in the Cleveland area while her husband, Nick Kuhn, is in Alexandria, Virginia. Together, with some other couples living apart, Eldred and Core have created an informal group they call the Lonely Hearts Club, a collection of pastors who support each other in their commuter marriages.

Core says the conversations with other “lonely hearts” can be helpful.

“I’m comfortable enough with the group to talk about the little things that I miss,” she said. “Like how strange it feels to text ‘good morning’ to my husband instead of leaning over and kissing him. It was good to learn that I’m not the only one with these vulnerabilities.”

Those vulnerabilities are not all unique to commuter couples.

Eldred says loneliness is at epidemic proportions for many different groups. He thinks a lonely hearts group could be a great church ministry for all people who are living alone, married or not.

“A Lonely Hearts Club would be a great opportunity for church-level ministry, as loneliness can be applied to all ages and contexts. For instance, a divorce group, a grief group, a young adult singles group, an empty-nester group, a singles group, a widow/widower group, homelessness ministry, prison ministry. There is a theological conversation in each of these connected to loneliness,” Eldred said. “Loneliness is a big problem in our world, and I think that a group like this provides a great opportunity for a church to talk about this vulnerable subject.”

God of love, thank you for providing a way for your love to be taught and shared. We ask that the world would be transformed through that love. Amen.