Moving from the ‘is’ to the ‘ought’

What my YAV year taught me about faith and politics 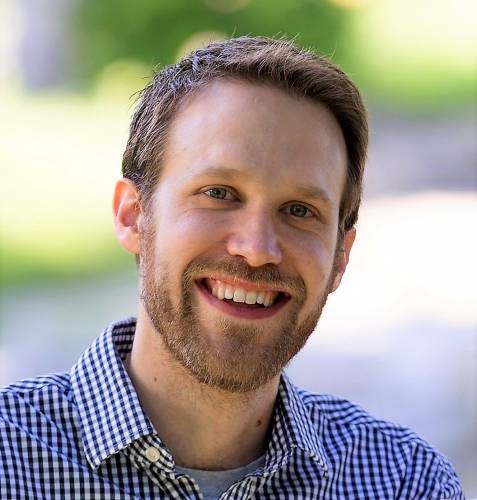 Several years ago, I was sitting in a room full of religious and community leaders from middle Tennessee. It resembled a typical clergy meeting, but what made that gathering distinct for me was that half of the leaders were Muslim.

During our time together, a colleague shared his own story about growing up in Jerusalem as a Palestinian Muslim, moving to the U.S., and eventually finding a home and family in Tennessee. His story was moving, and it lifted the veil for many Christians in the room, most of whom were white, on what life is like for non-Christians in Tennessee. In 2008 his mosque was firebombed by several members of the Christian Identity movement. Newspapers printed photos of him walking amid the charred remains of his place of worship.

The local Islamic community did not scatter in fear, however. Instead, they were invited by local Christian congregations to worship in their sanctuaries. After he had shared his story and the role his Muslim faith plays in his life, a Christian pastor came up to him and said, “When I hear you talk about your faith, I hear my faith.”

Coming face to face with our religious neighbors — and listening to their stories — reminds us that God has charged the church with a public, political birthright. 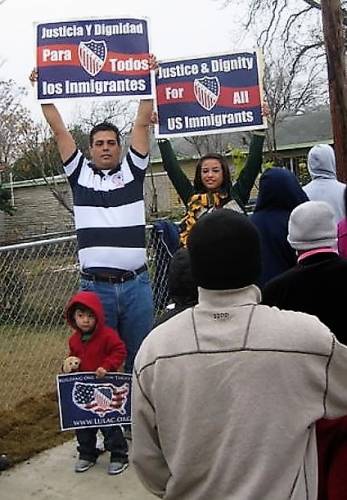 During his YAV year, Aaron Stauffer photographed the Martin Luther King Jr. March in San Antonio. It’s the largest annual tribute march to King in the nation, with an average of more than 300,000 participants. (Photo by Aaron Stauffer)

My first experience in interfaith organizing was during my Young Adult Volunteer (YAV) year in San Antonio. I spent a year living in community and working with the Industrial Areas Foundation (IAF),  building more radically democratic local communities, fighting for and protecting the values they cared most deeply about. I learned here that organizing is about values, not merely issues, because issues fade, but values don’t.

What I loved most about that year was the vocational clarity it provided. I spent many hours every week working with grassroots leaders fighting for their community. The highlight of that year was organizing a 500-person public event where city council candidates listened to testimonies by community members. The community had packed into an old Catholic church gymnasium. One teenager with whom I was working took the stage and told those candidates that she wanted them to promise to build more speed bumps in her neighborhood. Her brother had been hit by a speeding car the previous year. She wanted to influence those who would make decisions that impacted her life. She wanted to make sure they knew her story. For her, the world ought not to include conditions that allow cars to dangerously speed through neighborhoods where little kids, like her brother, play. My YAV year taught me the power of helping people move from the “is” to the “ought.”

For many Christians, our faith gives us tools and stories showing us that we do not have to accept the way the world is. We are called to move the world toward what it ought to be. I caught glimpses of the kingdom of God in the Catholic church gymnasium. The power of witnessing people living out their faith moved me. It still moves me. 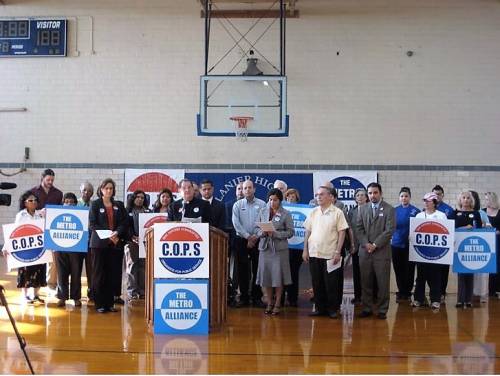 As a YAV, Stauffer worked with Communities Organized for Public Service (COPS) and the Metro Alliance, a coalition of leaders representing congregations, schools and others working with business and government on behalf of children, families and neighborhoods in San Antonio. (Photo by Aaron Stauffer)

My YAV year introduced me to the world of faith-based community organizing with groups like the IAF, Faith in Action and Gamaliel. Nowadays, I’m writing my dissertation on this work, because I realize that the power of interfaith organizing lies as much in its results as it does in the process of everyday folk acting out their faith in public. I believe this is our Christian birthright. Christians and Jews share the biblical concept of birthright, which Esau famously  gave to Jacob for a bit of stew. Listeners of that story today are less shocked at Esau’s brash actions in part because we are less familiar with the religious, familial and political importance of a birthright. To give up one’s birthright is to renounce not only one’s identity, but also material inheritance. To renounce one’s birthright is to renounce the very relations that have nurtured you.

For the ancient Israelites such relationships were not merely familiar and monetary, they were also political. For many Christians today, we have forgotten our political birthright: We too often forget that Christianity calls us to be public and political beings because politics is fundamentally about what a community holds in common — politics is concerned with the common good. Caring for the common good is a public, Christian matter.

The stories of our faith often depict encounters with God in the most unlikely of places. By now we should not be surprised that the Spirit can lead us to working with interfaith clergy in a Catholic gymnasium. Our task, it seems to me, is to continually equip the church for such times as these. Deeper listening to our religious neighbors is needed; those who make decisions that impact our lives need to be held accountable to our lived reality. If “liturgy” literally means “the work of the people,” then such organizing and public work is most certainly our Christian birthright. One task of the church is to see how the Spirit is calling us outside our four walls and into this work of listening and acting together for what God says the church and the world ought to be.

God of love, you came down to this lowly place because you loved us so much. Help us to reflect that love by doing the work that you call us to. We pray in Jesus’ name. Amen.