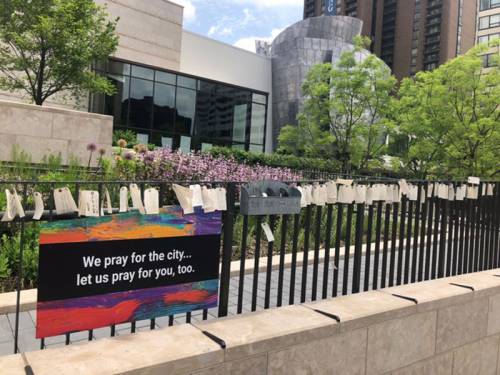 Westminster Presbyterian Church’s railing, which borders a well-trafficked shopping and dining hub in downtown Minneapolis, became a prayer wall for the community. Passers-by were invited to write their prayers and hang them on the railing. The prayers were then shared during worship services. Courtesy of Meghan Gage-Finn

Westminster Presbyterian Church in downtown Minneapolis continues to break down walls between church and community. As an engaged urban partner, it is listening to, and praying for, the concerns of its people.

Last summer, the church created its own kind of “Wailing Wall.” Passers-by were invited to write their prayer requests and hang them on the church’s railing that borders Nicollet, a 12-block shopping and dining hub in the city. Thousands of people pass by the church every day.

The prayer wall was the idea of the Revs. Sarah Brouwer, Westminster’s associate pastor for congregational life, and Meghan Gage-Finn, the church’s executive associate pastor. The pastoral duo wanted to move the midweek contemplative worship service onto the church’s new outdoor plaza during the summer months. So, they hung a sign on the railing that read: “We pray for the city … let us pray for you, too.”

Brouwer and Gage-Finn ordered 1,000 shipping tags. They wrote prayers on some of the tags and then attached them to the railing.

Then, hundreds of blank tags were left, along with waterproof markers, for anyone walking by to add their own prayer.

“We prayed the prayers of the city that the people had written on the tags during every Wednesday and Sunday service. Some were so poignant. Children wrote prayers; others wrote in different languages,” said Brouwer. “People asked for prayers for all kinds of things. One person wrote: ‘I’m an atheist, but I have hopes for the world.’ Another one wrote: ‘I’m addicted, and I need help.’ These prayers changed the tone of our prayers at worship.”

The prayer wall did more than provide a sacred space for voices to be heard.

It transformed both congregation and community, as it made the large monolithic stone church more approachable. A kind of unspoken spiritual dialogue with the wider world began.

Writing down one’s prayers as a faith exercise is not new. But writing them down for the world to see served as a public witness and as a communal testament to what it means to love your neighbor, the pastors said. It declared that there is but one God who hears our cries. Westminster Presbyterian Church, they added, became a faith community without borders, a way station for spiritual sojourners and a place of hope.

Gage-Finn said that hearing the stories, needs and concerns of those who live and work in the city, as well as those who visit, broke down barriers that have separated neighbors and neighborhoods not just in Minneapolis, but around the country, as word spread rapidly through social media.

“We would take some of the tags from the railing into the services and spend time praying for them. It offered a lens into what the community needed from us as a church,” said Gage-Finn.

One of those tags that had been torn from the railing sits on her desk. It was found several blocks away from the church — dog-eared, smudged and pressed with gravel. Even so, Gage-Finn says a spiritual connection was made, despite having no knowledge of who wrote it, or what the story was behind it.

“So much of ministry is just showing up and taking a risk and opening and creating space for connections. It isn’t always face-to-face. We wanted a way to be responsive to our neighbor, to look, listen and sense where the Spirit was leading in our context,” said Gage-Finn.

The prayer wall is one way that Westminster Presbyterian Church is living out its mission “to share the good news with a world in need of God’s peace, love and justice.”

“The aim is always the same — to search for new ways of serving God where God has called you to minister to a world that is hurting,” said Gage-Finn.