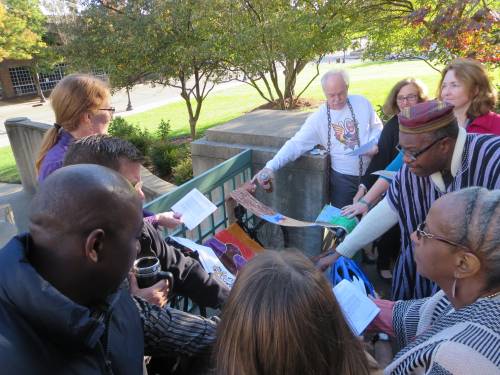 It’s been more than 50 years since the first Earth Day (1970). Spurred by concerns from that time period about oil spills, polluting factories, and dangerous chemicals being used regularly (described in Rachel Carson’s “Silent Spring”), thousands of college students and concerned citizens came together in mass rallies, across political lines. Later that year, the United States Environmental Protection Agency was formed, and federal environmental laws soon followed: the Occupational Safety and Health Act, the Clean Air Act, the Clean Water Act, the Endangered Species Act. By 1990, Earth Day began to be celebrated globally. The first United Nations Earth Summit was held in 1992 in Rio de Janeiro.

Presbyterians have long been engaged in caring for God’s Creation. National church policy as early as the 1950s showed concern for wasteful use of natural resources. In the 1980s, there was demonstrated coalescing around environmental concerns culminating in the 1990 Restoring Creation for Ecology and Justice policy passed at the General Assembly. There has been a continuous Presbyterian uplifting up of earth care concerns ever since. (To see some of these policies, go to presbyterianmission.org/ministries/compassion-peace-justice/acswp/topics).

In 2022, there are nearly 300 PC(USA) congregations who are certified as Earth Care Congregations through the Presbyterian Hunger Program and multiple environmental networks working to educate and advocate around issues of climate change and earth care. Throughout the year, at local and national levels, you will see numerous resources, events and opportunities for action to care for God’s Creation — including Earth Day Sunday (April) and Call to Prayer for the Care of all Creation (September). Many local congregations are visible in their community with Earth Day fairs, solar panels, stream clean-ups, community gardens, reusable shopping bags with the church logo and so much more.

Rev. Rebecca Barnes (she, her, hers), Coordinator, Presbyterian Hunger Program

Dear God, we give you thanks for the beauty, bounty and mystery of your Creation. We know we are but a small part of it. And we know we have often failed at your instruction to us to care for it. Many parts of Creation and communities of people suffer as natural resources continue to be unjustly extracted, as we fuel our desires for consumption, and as we fail to listen to the wisdom of those who know that land, water, plants, animals and natural systems are a gift to be cherished, honored and nurtured. Continue to embolden us so that we can educate ourselves and others, act for the protection and preservation of this earth, and stand with impacted communities who suffer the worst impacts of climate change and environmental degradation. Bless us, O God, that we may be transformed into a blessing for your Creation. Amen.