Facing the ‘unpretty things’ about our country’s history 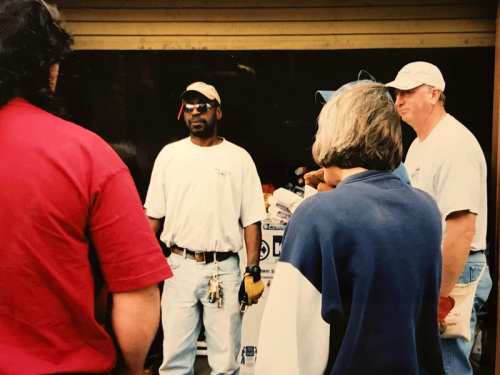 As members of Witherspoon Street Presbyterian Church and Nassau Presbyterian Church worked together on projects like building a Habitat for Humanity house, relationships and friendships were formed which brought the congregations closer together. (Photo courtesy of Jock McFarlane)

In Nassau’s beginning in 1776 as First Presbyterian Church of Princeton, enslaved and free Black Americans worshiped in segregated seating. In 1840 they formed their own church on Witherspoon Street.

“Our churches are joined together by a really long and frequently troubling history,” said Nassau member Pam Wakefield, “but churches are working actively to find solutions to problems together as Christians.”

At various times pastors of the two churches — and lay leaders as well — kept the congregations working toward reconciliation. A yearlong celebration of the 250th anniversary of Presbyterianism in Princeton in 2005 attracted participation from both congregations. As the congregations worked together on projects, including building a Habitat for Humanity house, Wakefield said a partnership between the churches was formalized.

“A group of us began to meet regularly,” she said. “The day we really shifted gears was right after George Floyd died.”

Pamela Johnson, a member of the Witherspoon Street church, remembers that emotions were running high following Floyd’s murder. Conversations that had been relatively easy to have suddenly became more difficult.

“I didn’t have words,” she said. “The race difference became the elephant in the room.”

Barbara Flythe of Witherspoon Street said she couldn’t deal with her feelings of pain and anger. But she recognized everyone in the room felt the same way.

“I’m a white guy honored to be in a church that’s predominantly Black,” said Cam Stout of Witherspoon Street. “That experience has opened my eyes to some issues. It’s so important for us to learn about one another.”

In their conversations, Flythe expressed how years earlier, in 2013, she was driving in her car when the news came on that George Zimmerman was found not guilty in the killing of Trayvon Martin.

“I pulled over and it was like I had a stake in my heart,” she said. “For the first time in 50 years, I no longer trusted the American justice system.”

At times over the past year, Witherspoon Street’s Audi Peal — who emigrated from Libya to the U.S. — has started to wonder whether people really value him.  “Do white people (here) have a problem with Black people?” he asked.

For Stout, the notion of a predominantly Black church and a predominantly white church getting together — and seeing them learn from one another — has been transformational. He believes “Bending the Moral Arc” is producing a ripple effect that will inspire other people of faith to begin or continue on with this kind of conversation.

For Leslie, it’s equally important for individuals in small, rural white churches to reach out to people that are part of Black communities in urban centers.

“Why?” she asked. “So that we can learn from each other.”

Leslie has seen how the more time that people spend together working on projects — which is what Witherspoon Street and Nassau have been doing over their long history — the more love, trust and faith is exchanged.

“That’s what Matthew 25 is all about,” she said. “It’s a discussion group but it’s also one with the intention of doing something and being active, to kick a hole in the infrastructure and actually do the work that bends the moral arc toward justice,” Leslie said.

Great God, you have given us abundance in our lives, our work and our world. Help us to multiply your gifts so that your great goodness shines through you, and so that all might live in your abundance now and in the world to come. Amen.