The Rev. Dr. Erin Swenson tells her story of faith and transition on ‘A Matter of Faith’ podcast 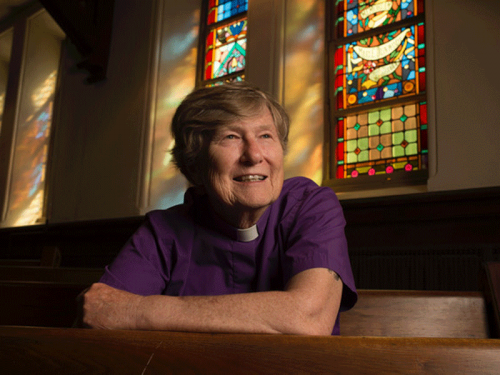 The Rev. Dr. Erin Swenson is the first known mainstream minister in the Presbyterian Church (U.S.A.) to change gender and remain in ordained office. (Photo courtesy of Erin Swenson)

The Rev. Dr. Erin Swenson finally met someone who shared her experience of being a transgender woman in the Presbyterian Church (U.S.A.).

“I grabbed her hands, and I held her close, and I said, ‘How wonderful to meet a fellow transgender Presbyterian. I’ve needed this for a long time,’” Swenson recalled. “And she looked at me and she said, ‘Oh, but I’m not a Presbyterian.’ And I said, ‘What do you mean? You love this church. They love you. Why are you not a Presbyterian?’

“And she looked at me and she said, ‘I, I didn’t think God wanted me to be in the church because of who I am, what I am.’”

At that time, in the mid-1990s, Swenson was in the midst of a bruising battle to remain in ordained office after her own transition. A committee in the Presbytery of Greater Atlanta was considering the question, and word was it was not going well for her. So, she took it upon herself to meet with every member of the committee to make her case, answer any questions, and tell that story.

The committee unanimously upheld her ordination, and in a close vote the presbytery did as well, making Swenson the first known person to change gender and remain in ordained office. She tells her story on “A Matter of Faith: A Presby Podcast,” which is produced by the Presbyterian Peacemaking Program and Unbound: An Interactive Online Journal on Christian Social Justice.

Click here to listen to the “A Matter of Faith” episode with Rev. Dr. Erin Swenson

Swenson told her story about growing up in the church but realizing in fifth grade, “I wanted to be a girl and not a boy.”

It was the 1950s, and she learned to submerge her desire to change, which fostered a deep depression that lasted for years. Swenson went on to study at Columbia Theological Seminary and was ordained in November 1973, completing requirements to be a pastoral counselor.

But she lived with a deep sadness, and in the early 1990s began the process of gender transition. While one of her fears was losing her family, including a wife and two daughters, that did not happen. Swenson remains close with her family, including her now ex-wife, and she says they were all happy to see her depression lifted when she made the decision to live as a woman.

Swenson has remained active in the Church, particularly in the LGBTQIA+ community, at one point serving as a co-moderator of More Light Presbyterians, a queer advocacy group in the PC(USA).

For all the progress though, Swenson still has disappointments with how the Church has treated her and the transgender community in general.

“I would have loved to be able to say that over the last 25 years, I’ve been invited, that I’ve spent 20 or 25 weekends a year traveling about the country to various Presbyterian churches everywhere, helping people come to understand what it is to be transgender and Christian,” Swenson said. “Of course, that has not been, in spite of my wishes for it. I’ve even had pastors of progressive churches say to me, kind of in an embarrassed tone, that they’re sorry that they haven’t invited me to come to their church, that they really have meant to, but that they were afraid that there were these members of their church who were very unhappy about my ordination, and they were afraid of what those members would say to me — as if that would make any difference to me, like I hadn’t heard people say anything nasty. There still is a lot of fear about being transgender.”

And she laments that her experience is not unique among transgender ministers.

“The people who are transgender and in ministry are simply candidates for the ministry,” Swenson said. “They’re waiting on a call to be able to be ordained. Or they have become staff members of seminaries or presbytery staff. They’ve done just about everything there is to do except be a pastor in a church, and for many of these people, that’s what they dearly desire.”

“I’m fortunate that I got to have that experience before I transitioned,” Swenson said.

New episodes of “A Matter of Faith: A Presby Podcast” are released on Thursdays and can be found here or wherever you get your podcasts.

Our Father in heaven, may we find courage and comfort in the daily reminder that you are a God who assures his children: “Do not fear, for I have redeemed you; I have called you by name, you are mine. When you pass through the waters, I will be with you; and through the rivers, they shall not overwhelm you” (Isaiah 43:1—2). In Christ’s name. Amen.