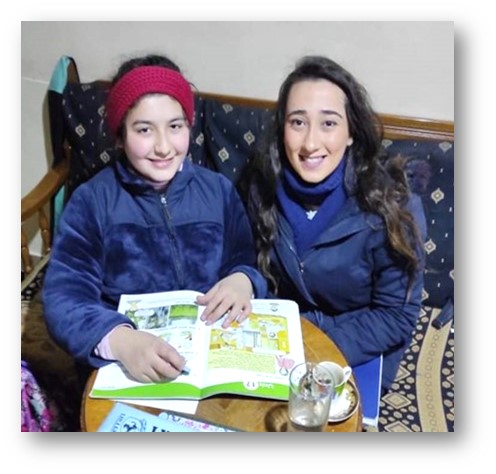 As part of JMP’s Community Development Program, youth who struggle in school are provided with tutoring by local college students for academic and spiritual uplift.

Throughout the Ottoman territories of 1915, Armenian villages were emptied out in a systematic campaign to demean and destroy innocent victims. Although authorities in modern-day Turkey deny this genocide, historians have gathered indisputable evidence of at least a million Armenians killed and a million more dispersed from their ancient homeland, the world’s first Christian nation.

For a people who have endured genocide and communism, their faith and their future might seem tenuous. Indeed, many of today’s young adults have been demoralized, unemployed and ready to flee. Yet voices of hope and change began to rise. In April 2018, peaceful protests dismantled the corrupt dictatorship and led to fair elections of new leadership.

In the fall of 2020, Armenia was faced with yet another humanitarian crisis. Azerbaijan launched surprise missile attacks on Armenia’s enclave — the Republic of Artsakh (Nagorno-Karabakh) — forcing their defense army into war to protect its people and homeland. During the 45 days of war, Azerbaijan, backed by Turkey, conducted horrible war crimes. Consequently, over 2,500 men perished fighting for their homeland, and dozens of civilians, including the elderly and children, were either wounded or killed. On Nov. 10, Armenia was forced to sign a painful ceasefire agreement with Azerbaijan and Russia, giving up a big part of its sacred land to stop the massacre of its people — shaking, once again, their spirit of hope. The war brought more than 100,000 displaced people from Artsakh, mainly women and children, who were forced to find refuge throughout Armenia.

The Jinishian Memorial Foundation in Armenia, under Presbyterian Church (U.S.A.) administration, developed a nationwide strategy to empower young leaders. Hundreds of young entrepreneurs in rural areas are using affordable loans to start their businesses and are provided with a coach and technical support. Since 2005, thousands of university students have learned about human rights, the economy, and the environment and have used small grants to tackle local problems. For example, Jinishian support helped one young man channel his expertise in radio electronics into a STEM program for dozens of youths, including many from a local orphanage.

Jinishian’s Indigenous, ecumenical teams empower Armenians living in poverty throughout the Caucasus and Middle East. In Armenia, 90% of the projects are designed to promote long-term, sustainable change so people can earn a decent living, grow healthy families and help their communities thrive. The program offers dignity and hope through relief, development and spiritual uplift.

In response to the war in the fall of 2020, Jinishian swiftly expanded its programs to include medication and rehabilitation for wounded soldiers and humanitarian relief for displaced families.

To promote understanding of Armenian culture and history, the Jinishian Memorial Program is hosting a “Discover Armenia Mission Trip” this fall from Oct. 1–10. The tour focuses on culture, outreach and faith. Join us to connect with Armenia’s people and see faith in action.

May the God of hope fill you with all joy and peace as you trust in him, so that you may overflow with hope by the power of the Holy Spirit. (Romans 15:13) In Jesus’ name we pray. Amen.