I sat down in a row of chairs with our Young Adult Volunteers (YAVs) waiting for the memorial service to begin. The sun was warm, but our chairs were covered by tent canopies so the several hundred people gathered there could enjoy the shade. The speaker, Yang Hae-Chan, expressed some frustration, “Some are asking us to forget what happened. How can we forget when we still have the scars? When some were made orphans? When some were disabled? We shouted, ‘We are civilians!’ but the soldiers continued shooting. We have only been having this memorial for 19 years, but I don’t know how to console my fellow survivors.” 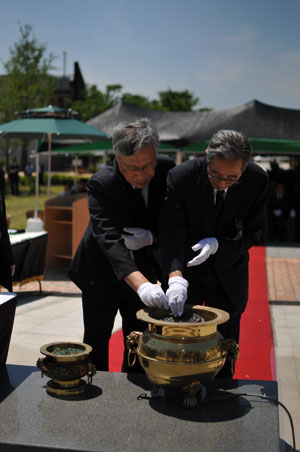 Chung, Koo-Do, director of the No Gun Ri Peace Park, and Yang, Hae-Chan, a survivor, light incense in honor of family members they lost under the bridge. Picture by Lim, Jae Geun.

On June 2nd, we attended the annual memorial for the victims of the No Gun Ri Incident, and the YAVs learned about an unsavory event that occurred in 1950 during the Korean War. Before I moved to Korea as a mission co-worker, the only Korean War massacres I had heard or read about involved North Korean forces and served as legitimation for how horrible they were and how necessary it is for us to continue fighting them.

This story, however, involved U.S. forces coming upon a village as they moved south away from the oncoming North Korean forces. On July 23, U.S. soldiers told the villagers of Jugok-ri to evacuate in preparation for the coming North Korean forces. As the village packed up, most physically capable young men left early so that the main village party would seem less of a threat to U.S. soldiers, unaware of what would happen to their families before they met again. The villagers who remained behind eventually headed south to a second village, where they met another group of U.S. soldiers who asked that they move once again. On July 26th, they were stopped by another division of U.S. soldiers who searched their belongings for weapons and then ordered them up onto rail tracks. One soldier was seen radioing a message, and soon several U.S. fighter planes swooped in to strafe and bomb the village group.

The villagers left the rail tracks and headed to a bridge near the No Gun Ri village under which they intended to hide. U.S. soldiers set up a perimeter on both sides of the bridge and began firing into the group under the bridge. The attack lasted for three days and four nights, ending on July 29th. Some of the villagers, including Yang Hae-Chan, the speaker mentioned above, survived under the bridge by covering themselves with the dead bodies, hoping the U.S. soldiers would assume everyone was dead. With this and other methods, some of the villagers lived to tell their versions of the story, such as Chung, Eun Yong’s wife. 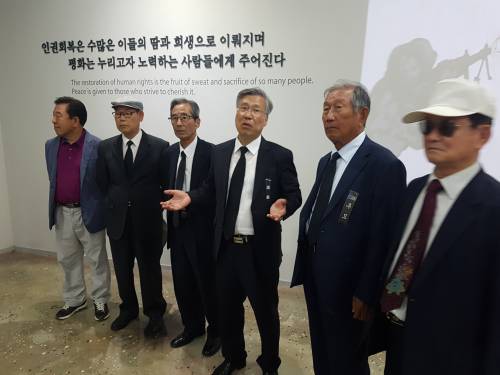 Chung, Koo-Do stands next to survivors from under the bridge, sharing the difficulties of the struggle for truth, human rights, and for peace.

As South Korea suffered under decades of dictatorship after the Korean War, the survivors were forced to keep their stories to themselves. Whenever the subject of such incidents came up, the official response of South Korean officials was to label the entire village as “communist,” thus legitimizing such immense force. Even after the war ended, the survivors continued to suffer ostracization in other communities. Nonetheless, Chung, Eun Yong felt his Christian faith calling him to bring the truth to light, and he tried collecting stories from the few willing to speak to him. He petitioned the U.S. government in 1960. The U.S. responded by saying, “There were no U.S. soldiers present at that location at that time.” When military dictator Park Chung-Hee took over South Korea, he made it illegal to mention any wrongdoing by the U.S. military. Refusing to give up, Mr. Chung wrote a semi-fictional novel based on the actual story.

Once military dictatorship fell to democratization, protests and a degree of democracy opened opportunities for appealing to the government. With the help of a journalist who agreed to publish his story, Chung, Eun Yong was finally able to pressure the South Korean and U.S. governments to hold an investigation of the incident. Unfortunately, the two militaries could not agree on a joint investigation. They released separate reports and finally admitted that U.S. soldiers killed non-combatants under the bridge near No Gun Ri. However, the U.S. stopped short of admitting any mistake was made and simply expressed regret that civilians were killed. Officially, the fault still seems to lie with the villagers. The South Korean government’s Committee for the Review of No Gun Ri Incident Victims and Restoration of Honor eventually confirmed at least 226 victims died either on the rail tracks or under the bridge as a result of the attack. 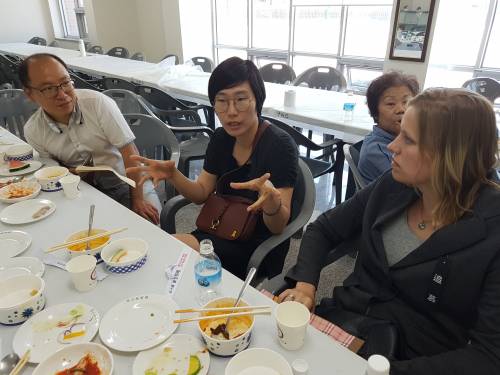 I appreciate the words of Mr. Chung’s son, Chung, Koo-Do, who said this is not a matter of declaring anyone in the U.S. to be evil monsters, even the soldiers who fired the guns: “We are still happy that the U.S. military stopped North Korea from conquering us. This is one friend telling another friend, ‘hey you made a mistake when you were trying to help us. Somehow we must repair our relationship by revealing the truth.’”

Chung, Koo Do describes his father’s vision as wanting to unite the soldiers who were there with the remaining villagers so that they could hold a joint service of healing, where the villagers would no longer be remembered as a threat and the soldiers would be released from their guilt by forgiveness. He explains that both he and his father have been driven by Christ’s call to reconciliation. They also have begun hosting conferences on education around peace and human rights, teaching others so that such horrible events do not take place again.

Dia Griffiths, one of our YAVs, later reflected, “Here are men and women whose lives were completely broken. But their tragedy does not begin and end with their story. Their strength as they tell their stories of pain and use their empathy to create seeds of peace and justice in the world beyond themselves is reshaping my understanding of hope.”

The villagers of No Gun Ri and the soldiers are running out of time as both are getting older. Even though many are no longer alive, bringing the truth to light can heal lingering wounds on both sides. The last General Assembly passed an overture, On Acknowledging and Reconciling for Killing Korean Civilians in July 1950 (Overture 12-01). This kind of step helps bring us closer to reconciliation.

Through your support, we are helping to connect these relationships and issues to U.S. Presbyterians in efforts to raise awareness and cultivate reconciliation. We thank you for coming on this journey with us through giving financially, reading our letters, and praying for us. If you are considering joining us, we welcome you! It is a journey filled with painful stories, but we also believe it is filled with hope!