A Letter From Kurt Esslinger and Hyeyoung Lee, serving in Korea

“I remember when I first started working here at the New Family Magazine offices and these streets were filled with people and with tear gas,” Rev. Moon-Sook Lee said as she gestured toward the streets while she and I (Kurt) walked down the road from the cafe to her office building next to the National Council of Churches in Korea (NCCK).

I asked, “Did you know that your office area would be that chaotic, or did it come as a surprise?” She grinned as she responded, “That was why I wanted to take the job in that building. The NCCK was very active in the movement for democratization. I wanted be a part of this.” 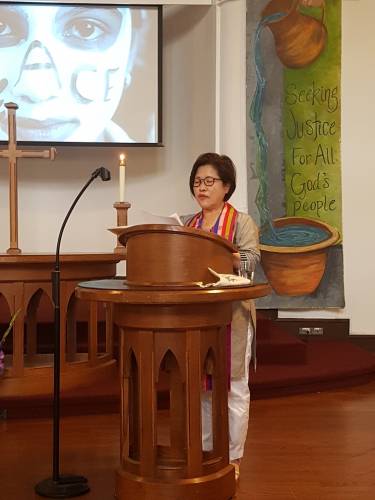 Rev. Lee was referring to the year 1987 when another round of demonstrations had broken out around South Korea and engulfed Seoul as activists sought to break the stranglehold of the US-supported dictatorship that had been ruling the South since its foundation in 1948. 1987 was also the year that Rev. Lee began working as an editor at New Family Magazine, whose offices shared the same building as the NCCK in the Jongno area. She currently serves as the executive secretary of the Asian Church Women’s Conference, but she is getting ready to visit the U.S. this coming fall for International Peacemakers, an opportunity created by the Presbyterian Peacemaking Program. She will go to talk about her experience in Korea’s peace movement and work as a co-chair of the NCCK’s Reconciliation and Reunification Committee, which I also support as ecumenical partner staff at NCCK. I knew this letter would give me a good opportunity to hear more of her life story and to share it with you all before she heads Stateside.

Rev. Lee joined me in the summer of 2016, when the NCCK brought its Korea Peace Treaty Campaign to the U.S. We spent 12 days driving from Los Angeles to Washington D.C., visiting cities in between. On that trip we connected for the first time and came to know each other as colleagues.

As I spoke with her, Rev. Lee mentioned one of the first projects she worked on as editor of the New Family Magazine. On January 13, 1987, Park Jongcheol, a pro-democracy activist and college student, died during an interrogation at the Anti-Communism Division of the South Korean National Police Agency. Park, the student chair of the linguistic department at the Seoul National University, was arrested for helping his colleague who was also wanted by the police for pro-democracy activities. He died while being tortured with water and electricity, but authorities tried to conceal this. The democracy movement found out the truth through their underground network and revealed it on May 18 of that year. There were many other students who had been arrested and whose parents feared their beloved sons or daughters would also become the victims of torture. Soon afterward, Rev. Lee had the mother of Park Jongcheol meet with the mother of another student who had recently been arrested and recorded their conversation. Through presenting their stories from the mothers’ points of view, New Family Magazine considered the way authoritarianism affects families. 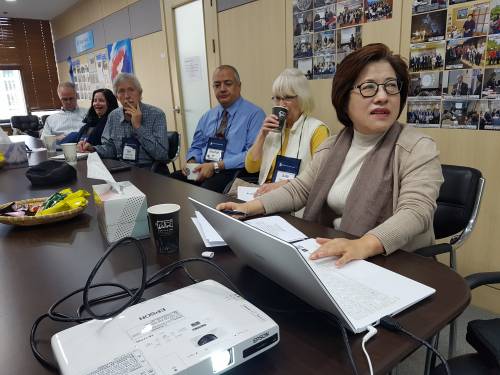 Rev. Moon-Sook Lee presents the history of the Korean Christian movement for peace and ending the Korean War to the PC(USA) Peacemaking Travel Study Seminar in November 2018.

For the NCCK’s Korea Peace Treaty Campaign, Rev. Lee has not only visited the U.S., but also the U.K., Switzerland, France and Japan. This summer Rev. Lee will not join them, but the NCCK will connect with Russian and Eastern Orthodox Churches in Russia, Turkey and Greece. The NCCK will implore them to advocate to various international governments, especially to the U.S. government, to cease hostile military threats and inhumane sanctions and instead approach North Korea in authentic dialogue through the step-by-step, trust-building process that South Korea and North Korea began with the Panmunjom Summit last year on April 27. The International Peacemakers Program will bring her again to the U.S. in the fall. If your community would like to invite Rev. Moon-Sook Lee to speak about the peace movement in Korea and about how the U.S. can help, or rather move out of the way, you can still apply to host her at: pcusa.org/ministries/peacemaking/international-peacemakers/. She will visit the U.S. September 13 – October 7. Applications to host are due July 1!

I was curious about what events might have led Rev. Lee to join the resistance and take up the candlelight of democracy and peace in Korea, and I think I found out when we were talking about each other’s childhoods. She told me about how when she met one of her former high school teachers, he mentioned that she had a reputation, that the other teachers warned him, “That Moon-Sook Lee is trouble!” Rev. Lee explained to me that her high school had one class called “School Drill (for National Defense) Discipline,” where they learned, for example, how to care for wounded people on a battlefield in addition to learning why North Korea was their enemy. She could sense that something was wrong with this curriculum that the government brought into schools, so she refused to listen or to study. When every other student received scores of 100, she was the only who failed that exam with a score of under 40. From an early time, she realized that she would refuse to participate in irrational dehumanization. Participating in the movement to resolve the Korean War with dialogue instead of bombs came naturally.

Since then, Rev. Lee has visited North Korea many times and has also participated in the Ecumenical Forum for Korea (EFK), the structure that facilitates the meetings between the NCCK of South Korea and the Korean Christian Federation (the federation of Protestant Christians recognized by the North Korean government). By the way, I just became coordinator of the EFK, and our next meeting will be this July in Thailand. Now Rev. Lee actively participates in re-humanizing trust-building activities and exchanges as well as advocacy seeking to turn U.S. foreign policy away from military threats and sanctions. If she comes to visit you this fall, I encourage you to ask her about her trips into North Korea!

We thank you for your support in the form of reading our letters, praying for our relationships, and making financial donations. When you join our work, you become a part of the community working alongside Rev. Moon-Sook Lee in facilitating re-humanizing exchanges across the boundaries of an entrenched conflict. Without your donations, I could not coordinate the EFK, and we would not be in Korea to hear the stories that we are sharing with you. Thank you!