“I learned more about the U.S.A. than I did about Korea while I was a Young Adult Volunteer (YAV)” has been a recurring theme during the four years we have seen participants come through the Korea site. In his self-reflection, Simon Doong has arrived at a similar realization. Simon was with us last November when we walked past Gwangwamum Square in downtown Seoul the night 2 million people gathered with candles to demand a full investigation into then president Park Geun Hye’s alleged corruption and bribery. Simon and our four other YAVs noted that while living in the U.S. they had never participated in a public political demonstration. This began a conversation among them about their own political participation as U.S. citizens. 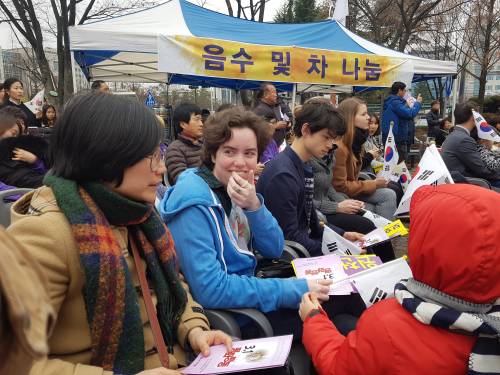 While living in Korea, our YAVs have seen a president impeached and removed from office as Korea’s constitutional court upheld the National Assembly’s impeachment on March 10. Participating in a buddy and cultural exchange program through Hannam University (our main site partner) has given Simon and his fellow YAVs opportunities to engage in conversations with Korean young adults about how they are reacting to the news about their president. In a blog post earlier this year, Simon recounted how one of his “buddies” was feeling about the Korea situation and considered its implications. “I could sense his disappointment, frustration, and embarrassment at the whole ordeal. It made me wonder, what does this mean for our society? Even developed countries experience political issues. Maybe modern society hasn’t progressed as far as we like to believe.”

I believe this is part of what makes the YAV program so special. We do not focus on how young U.S. adults are helping poor and needy Koreans with their resources or intelligence. The Korea YAV site is also not simply a fun tourist encounter through which one gets to experience Korean art and food and have something different before going back to life in the U.S. to continue living as before. YAVs come to Korea to learn about and understand the world outside the U.S. better, to see what life is like for Koreans who are struggling against poverty, for justice in the system, and for reconciliation amidst a persistent conflict. YAVs take that new understanding back with them to the U.S. to share with their communities, families, and friends. They are not only better equipped to address similar issues in their home country, but they come to understand how our U.S. foreign policy affects countries like Korea. We hope that this better understanding leads to a healthier relationship between the U.S. and the Korean peninsula as well as other nations around the globe. 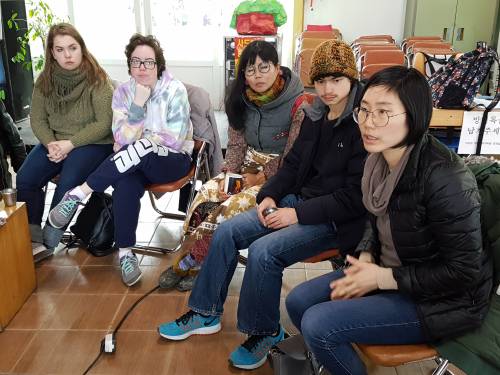 Simon added another reflection to his post: “Further, maybe I have been blind to the plight of fellow Americans in other parts of the country. As a YAV, I live in a house with four other American volunteers. Though we are from different parts of the country, we all are college-educated and committed to our work in Korea. We also share similar political views. Yet even in our small community we have communication issues. Sometimes people feel misunderstood or misinterpreted. This can cause them to feel alone. And we must work out those issues through dialogue and clear communication. It’s not easy. We don’t always succeed. Maybe these communication issues occur in our larger society as well.”

Simon’s story with the YAV program will not end when he finishes in Korea in July. He has accepted a placement at the New York national YAV site, where he hopes to work at the Presbyterian Ministry at the United Nations. It will be exciting for us to see Simon take all that he has learned about international relationships around the Korean peninsula and apply it to an international cooperation organization such as the UN. The Presbyterian Ministry at the United Nations explains that it “helps Presbyterians witness for justice and peace, in the name of Jesus Christ, within the United Nations community based on the policies of the Presbyterian Church (U.S.A.) General Assembly.” Simon has experienced aid work at the city administration level in Korea working in ground level programs at the Seonglak Welfare Community Center and says he is interested in seeing what it is like to advocate for justice at the top international policy-making level. All of our YAVs have determined to be much more active in their participation in the U.S. democratic process after their experience this year.

We are excited about the future possibilities for Simon and his fellow YAVs as they complete the rest of their year in Korea. We also hope that you will help us pray for them and for the Spirit’s inspiration in their continued discernment.

We thank all of you so much for continuing to support our work in Korea. Your prayers, support, and financial donations help to make sure we can provide this transformative work with a new group of young adults every year. You are helping us plant seeds that will one day bear glorious fruit for our entire global community. Please consider continuing your donation this year, or if you have never supported us before, we’d love to have you on board! May God’s garden continue to grow.