A letter from Kurt Esslinger and Hyeyoung Lee, serving in Korea

Dr. David Suh sat next to me as listeners around the world heard him tell those taking part in our webinar about the moment he met the son of his father’s greatest enemy, the chairperson of the Korean Christian Federation (KFC) of North Korea. Dr. Suh had pledged revenge against all communists while holding his father’s dead body after North Korean authorities executed his father during the Korean War. At a World Council of Churches meeting (WCC) his enemy asked him for translation assistance. “How could I help him?” he asked. “Will I dishonor my father?” He spent that night praying and asking God for advice.

This webinar was the second chance for me to hear Dr. Suh tell his story. I first heard him share it at a peace treaty workshop that I helped our partners in the National Council of Churches in Korea (NCCK) set up for representatives of its global partners engaged in the Korean peace movement. His story moved our entire group, so we set up an online interview webinar and broadcast it to supporters around the world. 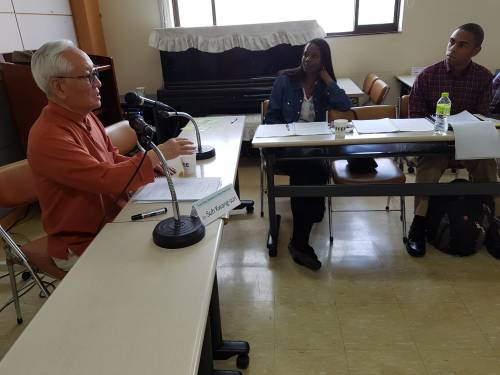 Dr. Suh tells his story to representatives of church partners from around the world.

Dr. Suh told the story of when he was a young child growing up in northern Korea when the peninsula was all one nation but was colonized by the Japanese empire. Young David’s father was a pastor of a church near the border of Korea and China, and he regularly spoke out against the Japanese authorities until Japan surrendered to the Allies on August 15th, 1945, effectively ending World War II. The US and the Soviet militaries then decided in a meeting without any Korean representation to divide the peninsula into two zones, with the Soviets occupying northern Korea and the US occupying southern Korea, which eventually became separate nations. Young David’s village became a part of North Korea after South Korea created its separate state.

Dr. Suh’s father continued speaking out, except this time he criticized the North Korean authorities. Other Christians, however, were willing to work with the new communist state, and they formed the KCF, which was later officially recognized by the North Korean government in the 1980’s. He considered the KCF to be his greatest enemies, assuming they were not true Christians because they helped a communist government, and he spoke out against them as well. After the Korean War broke out in 1950, Dr. Suh’s father was executed by North Korea authorities. When young David found his father’s body on the side of a river, he decided that he would take revenge against his North Korean enemies. He fled to South Korea and joined the navy to fight in the war. 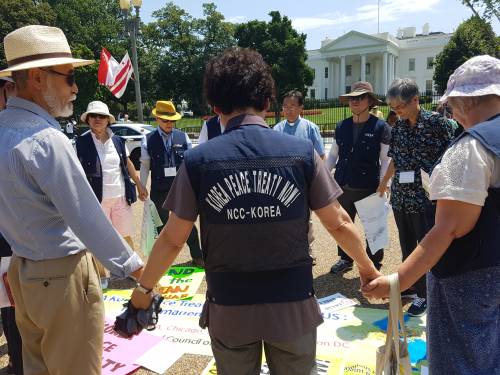 The NCCK campaigns for peace treaty negotiations in Washington, D.C.

After the armistice, young David earned a chance to study in the US, and his path led him to study theology. He also joined the Civil Rights Movement in the US and heard Martin Luther King Jr. preach about love for those who oppress you and God’s power to transform hate into love. This challenged his constant desire for revenge, and he began to question whether he could harbor such hate and still truly live as a Christian. After earning his PhD, Dr. Suh returned to South Korea, which was suffering under a military dictatorship led by Park, Jung-Hee, the father of Korea’s previous president, Park, Geun-Hye. Dr. Suh joined the democratization movement in resistance to South Korean dictatorship, and he found himself speaking out against South Korean authority, just as his father had spoken out against North Korea and Japan. Dr. Suh joined the work of the National Council of Churches in Korea (NCCK), one of our partners there, in demonstrations demanding democracy.

One day, Dr. Suh was asked to represent the NCCK and give a speech at a consultation in Canada held by the World Council of Churches (WCC). The WCC also invited the Korean Christian Federation (KCF) from North Korea to attend the consultation for peaceful reconciliation of the Korean conflict. The KCF had selected the son of their federation founder, Dr. Suh’s father’s worst enemy, to represent them. Dr. Suh’s enemy was set to speak just after him in a keynote address on behalf of North Korea. The night before they were to speak, Dr. Suh’s enemy approached him and asked, “Would you be my interpreter as I speak tomorrow?” Dr. Suh said that he would need some time to decide. He went to his fellow South Koreans and asked what he should do. They said, “If you help a North Korean even in Canada, you will be in danger of violating South Korea’s National Security Law. This is your decision alone.” He wrestled with God that night, but eventually he decided it was time to give up his desire for revenge and to help his enemy. He lived out Jesus’ call to love our enemies, and for him that meant Jesus was calling him to help his enemy, to reach out with compassion instead of revenge.

Dr. Suh told me that after that decision, speaking out against the suppression of justice in South Korea and speaking for dialogue with North Korean enemies became much easier. He said it was a kind of liberation for him. He learned more about the context in which division was created by outside forces, when US military policy created a separate South Korean state led exclusively by Koreans who were working for Japanese colonial authority. God transformed his perception of his enemies as he better understood the context. He no longer considered them to be “fake Christians,” but rather family in Christ. When we better understand the context of a conflict, we are better equipped to resolve it. Most of what we hear from North Korean refugees tends to reinforce our demonization of our enemies, but Dr. Suh’s story provides an invaluable example of God transforming revenge through reconciliation. This is an example we can follow, as God helps us learn more about his context, so our relationships of enmity can be transformed by God through the Spirit binding us in humanizing relationships with our enemies. Through God’s reconciliation I believe we can transform our conflicts around the world into opportunities for compassion, relationships, and peace.

I want to thank you for your support, as your gifts enable Hyeyoung and me to join this ministry of reconciliation, and to share it with partners around the world such as you. We hope to continue connecting US Presbyterians to the movement for peace in Korea, and if you have not yet, we invite you to join us through prayer, advocacy, or financial gifts. May God continue the work of transformation in us. Amen.