Individuals: Give onlineto E200496 for Kurt Esslinger and Heyoung Lee’s sending and support

Hello, friends across the world. We bring you greetings of shalom in the name of Jesus the Prince of Peace. Summer has arrived in Korea, and the humidity is beginning to take hold. Every now and then an actual rain shower comes through to cool it off a bit and release the blanket. One of those hot days our family took a stroll in the heat along with a couple of hundred other people up near the border with the North. I’ll get to that in a minute.

Our U.S. Young Adult Volunteers (YAVs) are now reaching the end of their year here in Korea. We have already had our Discernment Event, when we placed the YAVs who will come live with us next year in their stead (there will be five YAVs in Korea next year, by the way). We are also getting ready to send another four Korean students to be Exchange YAVs in the U.S. next year. Meanwhile Jordan and Kalyn—the current YAVs—are trying to figure out how to wrap up their year, and they are beginning reflections on what their year has meant to them. 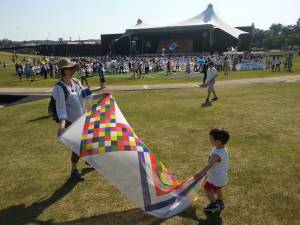 This is no easy task. When I was a YAV, back in the day, it took me almost two years after that year volunteering in England to be able to answer questions like, “How did your YAV year change you?” It took me another 10 years to fully grasp how that change might affect my life and the life of my family. That’s why we are encouraging Kalyn and Jordan to start thinking about those questions early. They have spent a year working and playing alongside children in neighborhoods that struggle with poverty; learning about how to deal with our privilege as U.S. citizens in a respectful and helpful way; and trying to learn the Korean language. Another piece they learn about is the history of conflict and division here on the Korean peninsula. We talk about this from the perspective of one of the three Critical Global Issues that Presbyterian World Mission has taken up as our calling: “We will engage in reconciliation amidst cultures of violence, including our own.” This is a complicated engagement on a peninsula divided by outside forces, that division lasting 70 years, and currently existing under a technical “state of war” even though open conflict ended over 60 years ago. Our YAVs are considering what might be our role as U.S. Presbyterians when the largest collection of U.S. military outside of the U.S. is stationed in and around this peninsula.

This past May a group of women peacemakers held an event in Korea called Women Cross the DMZ. Hyeyoung, our son, Sahn, and I participated in a short 3 km. walk, demonstration and celebration that welcomed them to the South after they had visited the North. This event was created by women who have been working for peace around the world, including Gloria Steinem from the U.S.; Leymah Gbowee, a Nobel Peace Laureate from Liberia; Mairead Maguire, a Nobel Peace Laureate from Northern Ireland; and women from almost 20 other countries as well as Korea. They began with a visit to North Korea to meet women leaders there and then moved southward to meet us on the South Korean side beyond the DMZ. It was a powerful message of women taking a courageous step to cultivate reconciliation through human relationship-building. So we brought our YAVs up to Seoul to participate in the symposium given by these women on Monday after they had crossed to the South on Sunday. 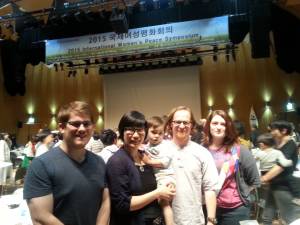 Hyeyoung, Kurt, and Sahn attend the Peace Symposium with Kalyn and Jordan

The YAVs came up on a train Monday morning to meet us and head up to the lecture center. Many of the women had brought prepared presentations about the work they had been doing in their home countries to build peace and cut off the cycle of violence. The amount of experience among the women of living through violence in their own communities was profound. However, the two most powerful presentations came from the two women who went off script and talked about their feelings having met North Koreans, their hope for peace, and some compassionate words for those of us in South Korea and the U.S. They specifically connected their experiences of violent stalemates in Liberia and Northern Ireland respectively to the conflict here in Korea. Leymah Gbowee remarked that if you go in immediately asking for stories of a community’s human rights crimes, they will not trust you. But if you build trust first and then come back many times, “Oh, the stories you will hear!” Mairead Maguire asked us all to consider fully the very real fear of annihilation on the part of our enemies. She testified that this kind of fear will forever mire talks of peace as it had in Northern Ireland. Our YAVs heard some challenging words.

Kalyn received the most inspiration from Liza Maza, a Filipina who told of the immense difficulty of working for peace while such a large part of your country is filled by a foreign military. The pain of war and occupation by various empires leaves complicated wounds that do not heal easily, not unlike the situation of Korea. This event helped her to reflect more on the role of the U.S. in Korea. Jordan told me that the example of these women undertaking such a brave and misunderstood action made a significant impression on him. He said, “I was inspired by seeing all of the women together for the common goal of bringing peace to such a non-peaceful situation.”

We hope to keep challenging U.S. young adults to consider their role as U.S. Christians called to the ministry of reconciliation throughout the world and especially where our country has such a large military presence. We want to thank you for your prayers and financial support. Please continue to support our ministry. Your gifts ensure that we can continue providing this kind of experience for our young adults and sharing the stories with Presbyterians all over the U.S. This is a steep mountain to climb, but we believe there is hope for a future of reconciliation as long as we all join together and continue bringing the truth to light. Amen.