Greetings in the name of Jesus the Christ, the Prince of Peace. The Advent season will soon be coming to Korea as I write this letter, and as you read this letter it should already have begun both here and in the U.S. for you. Every Advent I spend my time thinking about the hope of peace in the Korean context. I think about my work with the National Council of Churches and their Reconciliation and Unification Committee. The end of the year 2015 will mean the end of the 70th anniversary of Korea’s liberation from Japan and at the same time the beginning of a conflict and division between two systems. As am I writing this, that committee is currently visiting the Korean Christian Federation in the North along with our PC(USA) northeast Asia regional liaison, Rev. Choon Lim, as well as members of the World Council of Churches. I hope to receive some hopeful news of potential ways deeper relationships may be forged across the border. 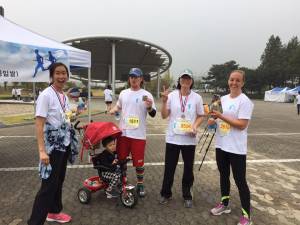 This past weekend my family along with our YAVs participated in a Reunification Marathon 6.15k run which honors the anniversary of the June 15th Agreement between North and South Korea that took place in the year 2000. We even took Sahn along with us for the run, pushing him in a tricycle/stroller. Some of the YAVs sped on ahead of us, hoping to achieve greater conditioning, and some of the YAVs needed to walk it because of recent leg injuries. One YAV, Alyson, ran alongside us and helped share the load of pushing Sahn.

Alyson has had an interesting life the past few years. I actually knew her as a student at the University of Illinois in Chicago, where I was a campus minister for Agape House Christian Ministry just before taking this job as a mission co-worker. Back then I encouraged her to sign up for the YAV program. She was interested so long as she didn’t have to go to Korea, where I would eventually be site coordinator! After several years of trying various jobs, working five jobs at one time to pay bills and student loans, she discerned that her initial interest to find work in her field of studies, industrial design, no longer fit her interests. She later applied to the YAV program and also found that the Korea site now did fit her interests. For the first time I’m working with a YAV whom I personally recruited.

After being here a while, in conversation we found that Alyson has gone through some pretty dark times along with her family members these last couple of years. Until these difficulties, she had believed that everything happened for a purpose, and one could always be sure of God’s presence in our lives according to that purpose. As events transpired, she came to the conclusion that it no longer made sense to believe that God has a reason for everything that happens. Now she finds it harder to pinpoint the presence of God in her life when she sees no purpose for what is happening. This, I think, is a common question for many of us as well. Where is God in the tragedy of the world? Where is God as the nights grow longer and the days get shorter? 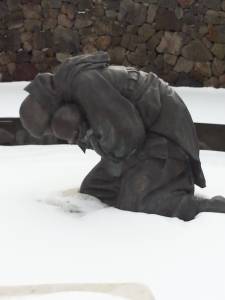 I also struggle to apply the hope of Advent, God coming to be present with us in the flesh in the form of a human child, to the tragedy of Korean division and conflict. I do not believe that God willed for Korea to be colonized by Japan, even though some missionaries in the past have suggested this to be the case. I do not believe that God wanted the Soviet Union and the U.S. to turn Korea into a stage for their international conflict. I do not believe that God purposefully had around 15,000 or possibly more Koreans massacred and/or disappeared on the southern island of Jeju from 1948 from 1954. However, I do believe that God was still present in each of these tragic chapters of human history, suffering alongside the victims. God has been working for healing amidst the wounded, giving them the strength to claim their humanity in the face of those trying to take it away. God is present in the friend who simply says, “I am here with you.”

Jesus’ birth did not mean Herod stopped murdering children, but it did bring the hope that thousands of people around the world have used to transform the world, to transform the church from supporting slavery to supporting its abolition, from supporting segregation to supporting civil rights, from perpetuating colonialism to challenging imperialism. This is the same hope that I turn to, living in a divided Korea. One day we will transform a state of war into a peace treaty. We are still a “people walking in darkness,” but I believe we have “seen a great light,” and I will do what I can to hold on to it (Isaiah 9:2).

Through your support we are able to continue this work of transformation, and I thank you. Your financial gifts and your prayers help us share this transformation with you, with our YAVs, and with our Korean partners. For those of you considering supporting us, it is definitely a struggle to apply the hope of Advent to persistent conflict and division, but I believe it is worth it. I hope you join us.