God’s version of gathering community together involves amazing feats in the midst of hostility as expressed in Paul’s letter to the Ephesians, bringing together those far away from each other, breaking down walls of hostility, and making us all members of the household of God. “In him the whole structure is joined together and grows into a holy temple in the Lord” (Ephesians 2:21-22). Hyeyoung and I seek to live into this image of the holy temple in the Lord through our work and efforts alongside our partners here in Korea. Currently we undertake that work through a Young Adult Volunteer (YAV) Program site that Hyeyoung focuses most on and a position at the National Council of Churches in Korea (NCCK) with their Reconciliation and Unification Department (RUD) which I focus most on. 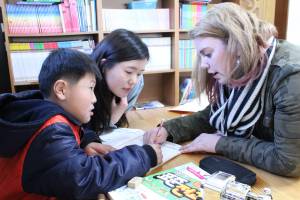 Molly working with a Korean youth on their English homework.

YAV Site
Every year a new group of U.S. young adults come to live with us in Daejeon for one year: August to July. We connect them to agencies where they volunteer and build relationships throughout the year such as children’s after-school centers, soup kitchens, and Korean War peace park memorials. We also create a curriculum for them to learn about Korean culture, faith, history, and we present issues through weekly issue discussions and monthly retreats around the country (a large part of our job). From the moment they step off the plane in Korea they have already begun an intense journey of service and learning the extent of the effort it takes to join together the household of God from across the Pacific Ocean.

Molly DeWitt came to live with us last year and plunged with gusto into the adventure including Korean language lessons, homestays with families that cannot speak much English, learning Korean games from children at Saeum Center, and trying to teach them English. Thankfully we have a “buddy program” through which our partner university, Hannam University, sends Korean college students to work alongside the YAVs and help with communication. Molly recounted a number of times when the children’s behavior did not fit with her expectations and even the Hannam buddies could not completely alleviate the struggle needed to build a trusting relationship. On retreats Molly and the others also walked along a path of some extreme joys and sorrows, attending a Korean traditional music festival one weekend and on another week walking through the fields of the southern Island of Jeju, where around 30,000 villagers were massacred over the course of seven years, starting in 1947.

The most important connection we were able to make for Molly and her fellow YAVs last year was to the Grandmothers who were sex slaves of the Japanese military during the early 1900s colonization. Molly visited their Women’s Human Rights and War Museum in Seoul and then saw them demonstrating in front of the Japanese embassy. They have been demonstrating there without fail once a week for over 1,000 weeks in a row now, demanding that Japan officially acknowledge the full extent of the crimes they committed against women held in sexual slavery during their colonization of East Asia. The Grandmothers’ example particularly struck Molly with their courage and persistence in continuing to demonstrate despite the unwillingness of the Japanese government to truly apologize and repay them for their wounds. Molly and the other YAVs remarked on how they seemed so strong despite such overwhelming lack of hope in moving the current government of Japan. Molly and the YAVs also learned about how these Grandmothers have broadened their activities beyond merely their own experience of pain during war. They created a fund to send to women all over the world suffering the violence of war—in countries in Africa and in Eastern Europe like Kosovo. They transformed their pain into energy for supporting those who suffer all over the world, advocating for an end to militarism and war and creating their own example of living into peace. This inspired Molly to seek out ways to build communities of peace back in the U.S. after her YAV year finished. She went on to serve a second YAV year in Little Rock, Arkansas, at Ferncliff Camp and Conference Center She has also applied and been accepted to Christian Theological Seminary in Indianapolis, Indiana, where she will be close to family. 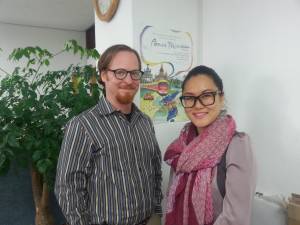 Esther Ji-Eun Kim with me at the NCCK offices.

NCCK
Esther Ji-Eun Kim is an intern with the Reconciliation and Unification Department (RUD) of the National Council of Churches in Korea (NCCK). I first met her when Presbyterian World Mission offered my services to NCCK. My initial task at the NCCK was to learn about all the various departments and their programs and the history of the ecumenical movement in Asia and the peaceful reconciliation movement among churches in Korea by collecting articles for the English newsletter. Esther was my main contact in the RUD, so she passed on many articles to me about the NCCK meetings with the Korean Christian Federation in North Korea and other such activities. I worked with the International Communications Department to complete the newsletters, but the NCCK also had me help the RUD. Esther then called on me quite often whenever the RUD was going to send out a statement in English to partner churches around the world or to the U.S. government. She once told me how incredibly grateful she is to have me around to help her translate Korean into English so that she does not have to write in English and revise it alone. We are both looking forward to this next year as I leave the International Department and English newsletters to focus entirely on the RUD.

We thank everyone for the support that helps our work continue, transforming and inspiring U.S. young adults, connecting them to justice and peace workers in Korea, and also my work with the NCCK. We hope I will help the NCCK connect more effectively with churches around the world to heal the wounds of division in Korea and bring reconciliation to this peninsula.