Will scooped up another bunch of kimchi with his tongs and put it on the tray before passing it on to the person next to him who was scooping meat. He could see out of the corner of his eye the disapproving facial expression of Yu seonsaengnim (not his real name), guessing that his kimchi scooping skills still were not up to muster. Nor had they been on the four previous trays, or the weeks before.

Finally Yu seonsaengnim came over and tried to explain again. Of course Will still can’t understand enough Korean and Yu seonsaengnim can’t speak enough English to express the nuance of what exactly makes the perfect scoop of kimchi. Will still isn’t sure whether his scoops are too small or too big or too thin or too thick or too much of the limp part of the cabbage or too much of the crunchy middle. Yu seonsaengnim picks up another tray and indicates, probably, what a proper scoop looks like. Unfortunately Will was pretty sure that his scoop looked just like the model scoop. Not sure what else to do, Will makes another attempt to imitate the model scoop and Yu seonsaengnim gives one last chuckle before moving the serving line on. 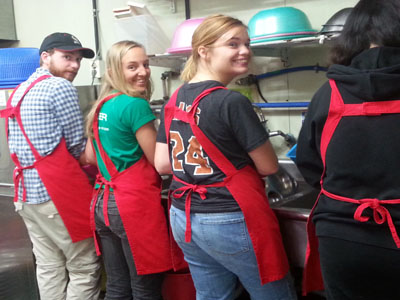 Will and YAVs washing dishes at the Saeanaru meal program

Such exchanges happen quite often for our YAVs in Korea as they volunteer at meal centers around our city of Daejeon, similar to “soup kitchens” in the U.S. These encounters are wonderful opportunities for our YAVs to practice grace. Actually a YAV year is chock-full of instances when our U.S. YAVs are reminded that they don’t completely understand Korean culture or cannot complete a task to the same standards as Koreans. A year of constant failure can often leave a YAV questioning their self-worth, which makes grace even more pertinent. We explore what it means to hold on to our identities as beloved children of God alongside our tendency to make mistakes in another culture.

When Will arrived along with his fellow YAVs we gave them a challenge in terms of adapting to a new culture. Sherwood G. Lingenfelter in Ministering Cross-Culturally writes about becoming a 150 percent person as we seek to live into a culture that is not our own. He compares being a 150 percent person with the 200 percent person that was Jesus, God incarnate, who was 100 percent God plus 100 percent human. Since we cannot reach the perfection of Jesus and someone born and raised into U.S. culture can never become 100 percent Korean, we allow ourselves some grace and recognize that the most we might ever reach will be 75 percent fluent in another culture. Then, as our new culture becomes more a part of us, we actually lose some of our original culture, thus ending up around only 75 percent fluent in our original culture. After spending years becoming a part of a new culture, says Lingenfelter, we combine these to become a 150 percent person. For YAVs like Will even more grace is necessary as he will only stay in Korea for 11 months. In such a short time most may only hope to become 25 percent fluent in Korean culture!

In this context God’s grace is made manifest in our relationships, helping them to bear fruit despite our tendency to make mistakes. In the same way God takes us imperfect human beings and causes our limited efforts to bear fruit, because God refuses to define us by our sin, our failures, our mistakes. There is liberation in this divine refusal. Even when we fail, grace manifests itself when God persistently engages with us, believing in us as God’s own gifted and beloved children. This identity transcends our inability to adapt fully to a new culture. So we try, we stumble, and we hold ever more tightly to God’s grace, to God’s faith in us as Spirit-filled beings capable of accomplishing amazing feats as we gather strength through our relationships with each other and with God.

So Will may never fully understand exactly what makes a perfect scoop of kimchi, and he may never be fluent in the Korean language, but he engages in the struggle of listening and looking for what his Korean partners are asking of him, little by little picking up more of the language so that he knows more than he did when he first arrived. He develops relationships with Koreans that will bear fruit as he carries them in his heart when he returns to the U.S. this summer, so that he can no longer have conversations about Asia, can no longer vote, and can no longer participate in a global system without considering the effects his choices and life might have on the lives of the Koreans he has come to know in his heart. This is the standard we use to measure the worth of our experience here. 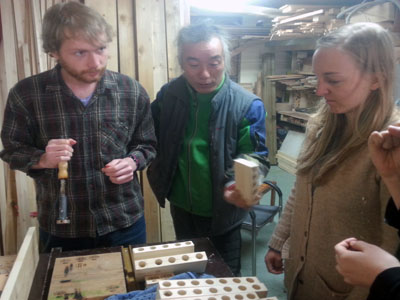 This is what we mean when we talk about the purpose of YAVs coming to work alongside us in Korea. They are not here to help poor needy Koreans, and they often find themselves in situations where they are not “helpful.” Back in the ’70s an Australian aboriginal activist once said, “If you have come here to help me, you are wasting your time. But if you have come because your liberation is bound up with mine, then let us work together.”

As you see that your liberation is bound up with ours, I invite you to join us by offering financial support, prayers, and your questions, comments or words of encouragement. Thank you for being part of this ministry. Together, alongside God, let us work for the salvation of this creation.