Make A Donation Click Here >
Home › What We Do › Where We Work › Co-workers › Korean YAVs in the U.S.

A letter from Kurt Esslinger on Interpretation Assignment from South Korea

Greetings to you in the name of Christ, the Prince of Peace. I am writing to you from the road in Ames, Iowa, at the moment, where I am visiting churches here before I head on to Chicagoland and elsewhere. I always appreciate this time to tell the stories of our ministry.

One of those stories that has been particularly interesting for communities I meet here involves the Korea YAV Exchange Program that Hyeyoung and I have been able to get off the ground with Hannam University. This year for the first time four young adults from Hannam University in Korea are currently serving as Young Adult Volunteers (YAVs) at YAV sites in the U.S.A. SooHwi is at our Denver, CO, site; SeongEun is at our Chinook, MT, site; HanByeol is at our Tucson, AZ, site; and JiHye is at our Atlanta, GA, site. 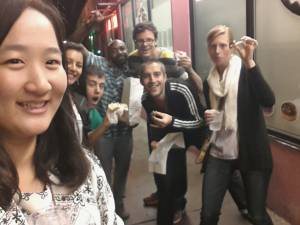 SooHwi and her YAV housemates in Denver

Before they were to come over to the States, Hyeyoung and I met with these four young women to talk about cultural differences, the purpose of the YAV Program, and to reflect on their hopes and expectations for a year of volunteering in the U.S. They were full of excitement and a sense of possibilities, but they also admitted they were quite anxious. None of them felt very confident in their English ability. We also sent cultural notes to each of the sites where they were placed to prepare the staff there for Korean cultural differences. Staff members at the sites were also concerned about whether they could offer placements that would provide meaningful work in light of the language barrier.

So far the four women are enjoying an amazing time and staff at all the sites tell us their work has been enriching despite the language barrier.

SooHwi in Denver has connected with other immigrant groups in the Denver area to learn about their struggles in a society where they also spoke a language different from English at birth. She sat with them to hear about their struggles navigating the U.S. system, having only recently learned English. One striking observation that SooHwi, along with the other three Exchange YAVs, has made is that they have a feeling of powerlessness in situations with their fellow U.S. YAVs when everyone else around them is speaking fluent English. The native speakers are making decisions for the entire group while not fully realizing that the exchange YAVs cannot keep up and therefore have little power to share their concerns. This is a valuable lesson for all of us native English speakers when non-native speakers are influenced by the decisions we make. We cannot assume that a non-native speaker truly understands our conversation when we are speaking at full native-English speed. Are we making an extra effort to open a space for non-native speakers to feel safe to disagree? Do we give them time to translate our words and also to translate how they want to respond?

SooHwi now feels much more confident in her ability to rely on God to give her the strength to put her own thoughts out there even if they might not come out in perfect English grammar. Her fellow YAVs also have developed better skills for keeping themselves aware of SooHwi’s different ability to join in conversations and decision-making. They make more of an effort to listen to SooHwi’s perspective and give her more space to say what she wants to say. 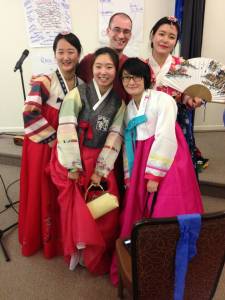 HanByeol and her YAV housemates in Tucson

HanByeol was placed with Community Home Repair Projects of Arizona (CHRPA), and supervisors there were concerned about how to work with her despite the language barrier. There is also a stereotype of Korean women not being quite as strong as U.S. American women, so they wondered if she could physically do the work. After six months of volunteering in Tucson with CHRPA, HanByeol has been making quite an impact. Her supervisor at CHRPA shared this reflection: “HanByeol rides her bike eight miles to work every day, and now that it’s winter, she is learning how to diagnose and repair gas and electric furnaces with Dan. She has built steps and wheelchair ramps with Abigail and Hugh and has repaired roofs with Josh and Allie. And she is not a token helper here, but a full partner, a member of the team who contributes her labor and her worldview and is starting to joke around more and experiment with being sassy and she knows that people like her and accept her and she is letting herself be known by others….

“I know that she still misses home and family and that her brain is tired at the end of a day because she is learning language and culture and bicycle safety as well as furnace troubleshooting and ramp design. I do expect, though, that she will look back on this year and see that it contributed to her life, and I expect that we will all look back on this year of CHRPA and see that HanByeol contributed to all of our lives and the lives of our clients whose roofs she repaired and water heaters she replaced. And that is all we hope for, really.”

This is a beautiful example of what mission work can look like where it is no longer the “powerful” countries sending mission workers to “needy” countries. Instead we all realize that we should all be sending and receiving mission co-workers so that we all both learn from each other and teach each other. This way we all become more helpful participants as people of faith in the global community. I hope you will join us in this mutual transformation by following these letters or our blog, or praying for us, or by sending in a financial contribution. Thank you to everyone who has already joined us. It’s because of your prayers and donations that we can continue this work. We can all learn to humbly walk with God a little closer together.