A dead robin and a departed Pop-Pop 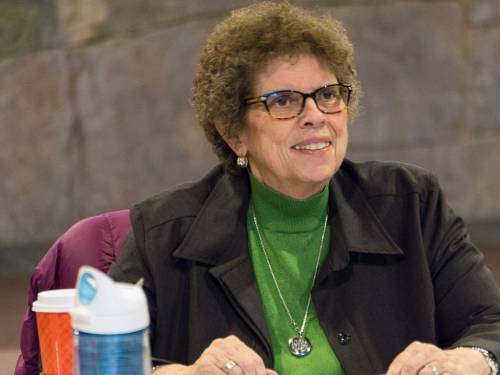 Presenting during a webinar sponsored by the Presbyterian Older Adult Ministries Network, the Rev. Dr. Eileen Lindner discussed what sociologists have labeled “the Bernie Effect,” natural bonds that can form between millennials and people old enough to be their grandparents, or even great-grandparents. What’s going on there resembles the way millions of young people were drawn to U.S. Senator Bernie Sanders, an Independent from Vermont, during his presidential runs in 2016 and 2020.

The Bernie Effect has changed the way that researchers study how many millennials have hopscotched past their parents’ generation to learn from and befriend people in the age group of their grandparents and older, Lindner said. Studies used to target the benefits in those relationships for older folks, including increased physical and mental health. Now they’re more likely to focus on, say, how young people benefit from working on a Habitat for Humanity home construction project alongside older people.

Millennials have had “a bumpy ride,” Lindner noted, with 9/11 occurring during their childhoods and the current pandemic in adulthood — all the while strapped with student debt and dicey career prospects. “They have some criticisms of the system, and they perceive the older generation is more effective in their social critique,” even as their own parents may blame them for their shortcomings, Lindner said.

“Young people know that reform is a communal activity, not a solitary enterprise,” Lindner said, “and they take great hope that it can be achieved.”

Lindner said “Bernie Effect” studies “stay constant across gender, race and class. That is truly astounding.” What we don’t know, she said, “is if this intergenerational romance will endure the whole of life.”

Lindner, who has 47 years’ worth of experience in Presbyterian Church (U.S.A.) ministry, told the story of her then 4-year-old son, Peter, who spied a dead robin while on a walk with his mother. “Mommy, make it better!” he told her. “Oh Peter, I can’t. The robin died.” Lindner told her son that all living things die someday. “But not you, Mommy — right?” “Yes, Peter, one day even Mommy, but not for a long, long time. And when it does happen, I won’t be the most important woman in your life.”

A few days later, the two visited Lindner’s mother. “Why don’t we have a Pop-Pop here?” Peter asked his grandmother. “Oh, he was a wonderful man, but he’s gone now,” his grandmother told him. “He had a wonderful life and he’s with God now. He’s very happy and very proud of you.”

On the way home, Peter turned to his mother and said, “Mommy, you don’t have to worry about dying. You go to God and you can see everybody.”

“That’s what I thought I’d said,” Lindner told the 40 or so webinar participants. “But he didn’t hear it from me. He heard it from Nanna.”

One said she had the privilege of having her mother live with her during the last 10 months of her mother’s life. Young church volunteers would “come over to hang out. What they were doing was asking her questions knowing she would not be judgmental” while answering them.

“We have certain expectations, but grandparents are past that,” another said. “What a blessing to have grandparents or grandparent-like people to fill in the gaps.”

“Nobody in our group was surprised by this research,” said another. “Church is a great venue for this to happen, and they are seeing more of that in their churches.”

As she wrapped up the workshop, which was enhanced by online worship led by the Rev. Jon Brown, pastor of Old Bergen Church in Jersey City, New Jersey, Lindner said she “longs for our church to enunciate not when do we get back to normal (following the pandemic), but how can the new normal be more equitable and generous? We are doing what the Rev. Dr. Martin Luther King Jr. told us to do 40 years ago, to honor and respect all labor, all jobs.”

“I look for the church to enunciate this new heaven and new Earth,” Lindner said. “I think that would be wonderful.”

Loving God, we remember being part of your family. We are blessed in many ways. You call us to share our love with others and so we continue to spread the good news that you are with us forever. Amen.