Spotlight on history: Presbyterians in Seattle 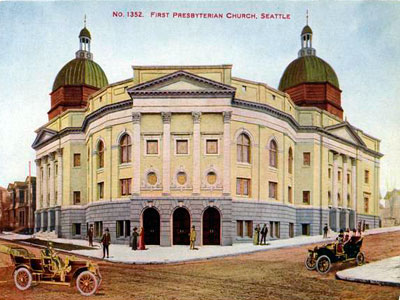 Within two months of the chartering of the city of Seattle, seven Presbyterian men and women gathered in George Whitworth’s home to organize themselves as the First Presbyterian Church of Seattle. Their session first met in 1873, as Whitworth preached alternate Sundays with a Methodist minister. Their first sanctuary was built at the corner of Third and Madison streets in 1877. The church grew rapidly, by 1894 boasting 643 members, and moving into a new building at the corner of Fourth and Spring.

In 1901, the congregation called Mark A. Matthews, a Georgian fundamentalist, to the pulpit. He described the congregation’s religion as “thoroughly orthodox, fundamental to the core, premillennial, free from heretical tendencies, modernistic views” and his appeal resonated. By 1907 First Seattle was the third largest congregation in the Presbyterian Church in the U.S.A. at 2,550 members. Their third building, erected that year for $5 million (more than $12 million in 2016 dollars), had a cinder track on the roof and audio apparatus in the pews for the hearing impaired. The congregation became the largest in the denomination in 1910, and owing to this influence, Matthews was elected moderator of the denomination in 1912. 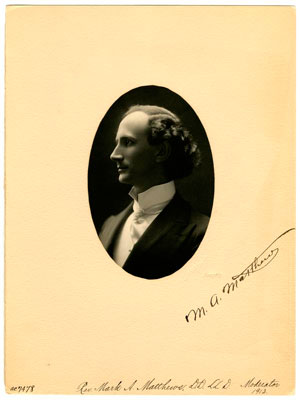 First Seattle’s longest-serving minister was known for his fiery rhetoric and for his espousal of Progressive-era causes, such as consumer safety, temperance, and abolition of prostitution. He was instrumental in the recall of Seattle Mayor Hiram Gill in 1911, served on the Seattle Milk Commission, hired a private detective to search out relationships between the businesses of Seattle’s Tenderloin district and local politicians, and testified before Congress on behalf of Japanese immigrants. Matthews was at the same time an opponent of women’s rights, a diehard enemy of organized labor, and an anti-Semite. A frequent visitor to Woodrow Wilson’s White House, he advocated for the forced removal of recent immigrants from Eastern Europe, owing to their allegedly innate communism and anarchism.

By the time of his death in 1940, Matthews’s church had 8,818 members in 26 branches, run by a session of 110. Gradually, most of its branches and Sunday schools became independent and still number among the largest and most diverse in the denomination.

God, we look to you this day and ask that the Holy Spirit would move in our lives, our neighborhoods, our churches, and our cities to make us one. Amen.