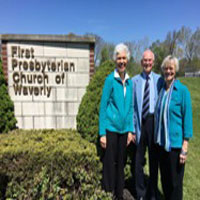 Nel Huck (left) and Bruce and Karen Henderson made “seed gifts” that encouraged others in their congregation to give generously to mission co-worker sending and support.

The “seed money” planted by three people at First Presbyterian Church of Waverly, Ohio, has resulted in a harvest of generosity directed toward Presbyterian mission co-workers.

Bruce Henderson and his wife, Karen, gave $2,500 in support of mission co-workers, as did their friend Nel Huck. The three then invited others to join them by making gifts of any size. After a January mission emphasis, the 110-member congregation added $8,500 to the initial $5,000.

The result was a $13,500 gift to Presbyterian World Mission, an amount that was in addition to the congregation’s budgetary support for mission co-workers. Last year, it gave $4,287 through its budget.

News last year that a financial shortfall could result in the recall of up to 45 mission co-workers motivated the Hendersons and Huck to take action. “We began to talk about how churches might help solve the problem and possibly change the downward trend in mission giving,” Bruce Henderson said.

“One of our goals is to encourage other churches to do what we did,” said Huck, adding that they will start with congregations in their presbytery, Scioto Valley.

In their own congregation, Huck and Bruce Henderson did not identify themselves as the people who made the original gifts, but they urged support for the offering. The congregation publicized it through bulletin inserts, posters, mission co-worker prayer cards, and “minute for mission” emphases.

During a “minute for mission,” Bruce Henderson shared that he had studied the congregation’s mission giving and found that its mission co-worker support amounted to only 71 cents per member per week. “I think that was pretty eye-opening to people,” he observed.

Giving to support mission co-workers has increased not only at First Presbyterian of Waverly but also among other congregations, mid councils, and individuals. Gifts in 2015 exceeded the goal, but World Mission leaders, while grateful for the upsurge, stress the need to continue the momentum. “By God’s grace and the generosity of many Presbyterians, we were not required to end the service of any mission co-workers prematurely,” said Hunter Farrell, former director of Presbyterian World Mission. “But because our mission workers make multiyear commitments to serve, we cannot look at a single year in isolation.”

Members of First Presbyterian of Waverly are mostly retired people, many of whom live at the nearby Bristol Village Retirement Center. No arm-twisting was needed to motivate giving, Bruce Henderson and Huck said. “In my pastorates, I learned that Presbyterians do not give according to affordability but rather accountability,” Henderson said. “We didn’t try to put a guilt trip on people. We just told them about the needs.”

Huck agreed, adding, “When people see a need for something and have a heart for it, they will give.”

Heavenly father, your unconditional love inspires us to be loving, welcoming, and hospitable to our neighbors. Pour into our hearts your compassion; strengthen and guide us as we go forth to make your kingdom tangible. Grant us your peace and surround us with your presence. Amen.