Despite a divided world, mission co-worker discovers the blessing of connection in Malaysia

You may not see them, but they pick the crops, sweep the floors, care for the children and elderly, build infrastructure, labor in factories, cook, and serve. They often have to leave their home countries and families to find a job. They send much of their earnings back home to their families.

I had the opportunity to teach and preach at a gathering of 20 congregations of the Presbyterian Church in Malaysia.

Malaysia has three main people groups: the Malays, who are Muslim; the Chinese, who worship traditional folk gods and include a good number who are Christian; and the Indians, who are Hindu or Sikh or who worship other Indian gods.

I stayed in a simple hotel in the city of Kluang for five days. Next door was a barbecue restaurant owned by a Chinese Malaysian. A number of folks from other countries also work at this restaurant. Each evening as I returned to the hotel, I would talk with these young men. During the week, as they were finishing their jobs of sweeping and mopping and preparing hot pepper sauce for the next day, they would offer me a glass of tea and tell me of their lives. 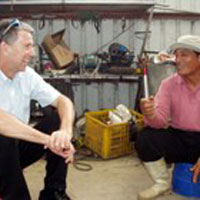 John McCall talks with a Bunun tribal elder in Taiwan.

I got to know Iman from Indonesia. He is a Muslim and speaks Malay. He told me that his parents cried when he prepared to leave Malaysia. Another young man, Nini, is from Myanmar (formerly Burma), a country that is experiencing tremendous governmental change. Nini is a Buddhist and has nine brothers and sisters. The third young man, Raz, is a Hindu from Nepal. His eyes lit up when I mentioned the Himalayan Mountains and his country.

These young men welcomed me to their place of work each evening. They put their mops aside and sat with me. Their boss joined us at the table several times. They told me of their dreams and lives. One showed me pictures of his Vietnamese girlfriend. 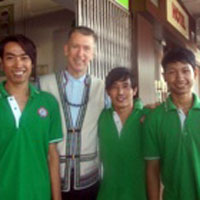 PC(USA) mission co-worker John McCall says goodbye to friends from Myanmar, Nepal, and Indonesia before he leaves Kluang, Malaysia, to return to Taiwan.

The next morning, I went downstairs and saw them standing there. They had dressed up in their finest, and Nini brought his Vietnamese girlfriend so I could meet her. We took pictures and laughed together.

I wanted to bless them in some way, but I also wanted to be sensitive to them. They knew that I was a pastor, so I asked if I could offer a prayer of blessing. We held hands, and I prayed for each of them. It was a wonderful moment of connection. In our divided world, it was such a joy to get to know a Muslim, a Buddhist, and a Hindu and to share tea together. I felt as if Christ was the unseen guest at that table.

God of life, thank you for our mission co-workers. Lead them in their efforts. Summon us to service so that our collective actions may facilitate healing of our relationships with one another and with all of creation. Urge us toward wholeness, we pray. Amen.