Sometimes global ecumenical bodies such as the World Council of Churches (WCC) seem far removed from the daily lives of Christians in the United States. But 49-year-old Presbyterian minister Rebecca Todd “Toddie” Peters says her work with these bodies “has completely shaped how I live in the world.”

In fact, when Peters published her 2014 book, Solidarity Ethics: Transformation in a Globalized World, she dedicated it “to the women and men in the ecumenical movement who have become my ‘cloud of witnesses.’” 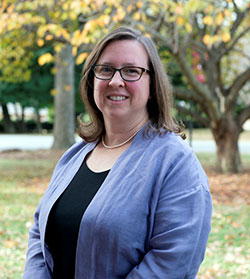 Peters, who is professor of religious studies at Elon University in North Carolina, says what has stood out for her in more than two decades of work with the WCC “is really the people, the relationships I’ve developed.” Getting to know people from many nations, she says, has broadened her vision of the world and taught her “what it means to be a faithful Christian.”

Peters represents a new generation of ecumenical leaders in the Presbyterian Church (U.S.A.), says the Rev. Robina Winbush, director of ecumenical relations in the PC(USA)’s Office of the General Assembly. “Toddie is deeply appreciated by colleagues within WCC circles for her ability to relate to partners from a diverse set of ecclesiological and cultural backgrounds.”

In Solidarity Ethics, Peters describes the powerful impact of her first international ecumenical gathering, a women’s leadership development conference in Jamaica that she attended at the age of 24. She shared with the group of 30 women her plans to do mission work among marginalized people in the two-thirds world. Peters recalls being challenged by Sola, a young lawyer from Nigeria, to use her place of privilege to educate North Americans about global poverty and injustice.

“If you want to help me and my people,” said Sola, “the best thing that you can do is to go back to the United States and confront the powers of globalization that are destroying my country and my people.”

That encounter, says Peters, “opened my eyes to new ways of seeing the world.”

Ecumenical experiences have shaped her sense of vocation, Peters says. While working toward a doctorate in Christian ethics, “it was my experience in the global ecumenical movement that shaped my view of global justice and what I wanted to do as an ethicist.”

She decided to focus on helping Christians evaluate various approaches to economic globalization from a moral perspective—learning to ask such questions as “Is this compatible with our faith as we understand God’s intentions for the world?”

Her research resulted in the 2004 publication of her first book, In Search of the Good Life: The Ethics of Globalization.

The book won the 2003 Trinity Prize from Continuum Press.

Peters’ initial experiences with global ecumenism revolved around leader development. While helping launch the PC(USA)’s National Network of Presbyterian College Women in the mid-1990s, she became involved in work with Student Christian Movements (SCMs) under the umbrella of the World Student Christian Federation (WSCF). She was facilitator for young women’s leadership training events of the World Council of Churches in Ghana and India in 1996.

“I can’t stress enough the importance of organizations like the WCC and the WSCF in shaping and forming leaders for the next generation of ecumenical work,” she says. For example, Peters mentions Hermen Shastri, executive director of the Council of Churches of Malaysia, who plays a crucial role in bridging divisions in a country with an increasingly conservative Christian community and a political context hostile to Christians.

“He came up through the Student Christian Movement,” Peters says. “That’s where his faith was shaped and developed, and his ability to bridge those divides is a direct result of his SCM work.”

One of the most significant projects Peters has been involved with is called Moral Discernment in the Churches. For more than a decade she has been one of the primary leaders of this process for the WCC’s Standing Commission on Faith and Order.

“Historically, the Faith and Order Commission has worked on doctrinal issues that divide churches,” Peters explains. “But increasingly, it’s moral issues that are dividing churches.”

The commission developed case studies on some of these moral issues. One looked at how the issue of homosexuality has split the Anglican Church. Another examined the tensions between evangelical and Orthodox churches in Eastern Europe, particularly regarding proselytism. And another looked at how different views on globalization are dividing churches in the global North and global South.

They discovered that when it comes to church divisions, “it isn’t simply disagreement about Scripture,” Peters says. “There are a host of factors that play into these tensions on moral issues.”

For example, cultural differences affect how churches in the global North and global South view economic issues. Other differences grow out of contrasting views on authority and the role of reason, science and natural law in various church traditions.

“Understanding these factors can help us create better ways of communicating,” Peters says.

Lord, we are continually surprised by your abundant presence in our lives. Help us to be open to your working through the Holy Spirit and to recognize when we are being called to your service. Amen.