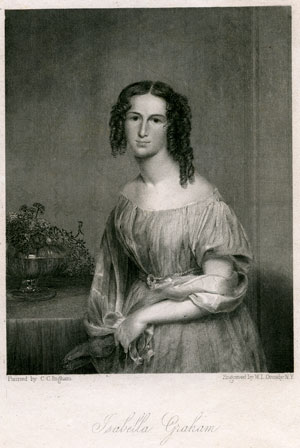 Isabella Marshall Graham (1742–1814) was an educator and philanthropist who worked tirelessly to educate and support women and orphans.

Isabella was born in Lanarkshire, Scotland, where her devotion to education and God manifested at a young age. As a child, Isabella selected a shrub in the woods of her father’s estate as a sacred spot where she would pray. Before she was 10 years old, she decided to use the money her late grandfather bequeathed her to fund her education at a boarding school. At 17, she was confirmed in the Church of Scotland by her minister in Paisley, John Witherspoon.

A few years later, Isabella married John Graham, an army physician in the Royal Americans 60th regiment, and in the late 1760s the Grahams moved to Canada for his military posting. When the Revolutionary War broke out in America, the British government ordered John’s regiment to Antigua, and the entire Graham family sailed for the West Indies. John died shortly after arriving, in November 1774, a tragedy that indelibly shaped Isabella’s future. Alone in a foreign land, penniless, pregnant and with three young children to care for, she decided to make the arduous journey back home.

In Scotland, Isabella struggled to care for her family on the meager earnings of a teacher. In 1780, she decided to take charge of a boarding school in Edinburgh. There, it occurred to her that if every poor person in the neighborhood set aside one penny a week, the funds could be used to assist the contributors in times of need. This idea spurred the organization of the Penny Society, later known as the Society for the Relief of the Destitute Sick.

During a 1785 visit to Scotland, John Witherspoon — now a renowned American patriot, signer of the Declaration of Independence and head of the College of New Jersey — encouraged Isabella to bring her gifts to the new United States. Four years later, she arrived in New York City with her daughters and opened a school for young women. The school attracted prominent visitors, such as President George Washington, Episcopal Bishop Benjamin Moore and Presbyterian minister John Rodgers, moderator of the first General Assembly.

In 1797, Isabella became the first director of New York’s Society for the Relief of Poor Widows with Small Children, working to help families ravaged by yellow fever. In her annual address to the Society in April 1800, she described what it meant to be a widow:

Widow is a word of sorrow in the best of circumstances; but a widow left poor, destitute, friendless, surrounded with a number of small children, shivering with cold, pale with want, looking in her face with eyes pleading for bread which she has not to give, nor any probable prospect of procuring: her situation is neither to be described, nor conceived. 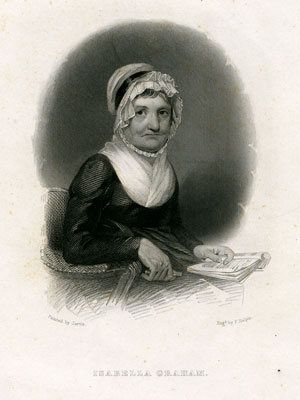 Until her death in 1814, Isabella also served the Orphan Asylum Society and the Society for the Promotion of Industry amongst the Poor. Her passing was the occasion of several laudatory sermons by New York clergymen, including John M. Mason, provost of Columbia College.

Isabella’s Christian faith formed the bedrock of her life — and her legacy after death. Her biography and collected writings, compiled by her daughter and son-in-law Joanne and Divie Bethune, is titled The Power of Faith. It went through multiple editions in the first half of the 19th century and was reprinted by Garland Publishing in 1987.

Gracious God, help us observe the world around us through your eyes, as your servant Isabella Graham did, that we may join with others to bring aid to those who lack resources and comfort to the friendless.

Revised Common Lectionary Readings for Sunday, May 21, 2017, the Sixth Sunday of Easter (Year A)