Lessons on love, loss and all the saints reflect the life of Dennis Hughes 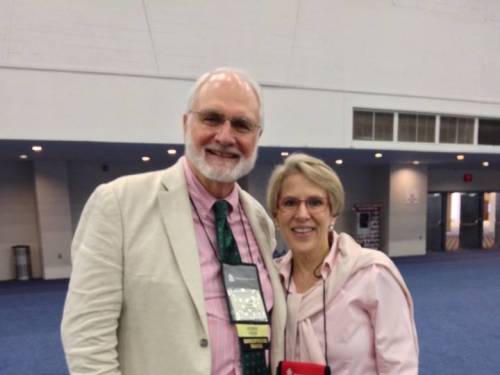 Dennis Hughes with the author, who were ‘in the pink’ at the 221st General Assembly (2014). (Photo provided)

Dennis Hughes had always known that in life—and in death—he belonged to God. But in more than seven decades of living, he knew the latter all too well.

As a newlywed in his early 20s, Hughes was thrust too soon into the role of family patriarch following the premature deaths of his beloved in-laws. It was a role, he said, “to which I had not aspired, nor thought I would be cast into.”

Then, as a pastor for nearly 50 years, Hughes was an unfailing source of comfort to grieving families even as he bore faithful witness to the resurrection. At the font, he steadfastly proclaimed baptism as a dying and rising with Christ. And—as one of the foremost writers and interpreters of Reformed liturgy—Hughes crafted resources for the Book of Common Worship (1993) and articles for Reformed Liturgy & Music that continue to inform Presbyterian practice around death and dying.

In January, Hughes himself learned that he didn’t have long to live, when he received a diagnosis of stage IV pancreatic cancer. Three months later, in mid-April, Hughes died at age 73. But even as he approached his own mortality, Hughes had yet another gift to share with the Presbyterian and ecumenical church that he loved. 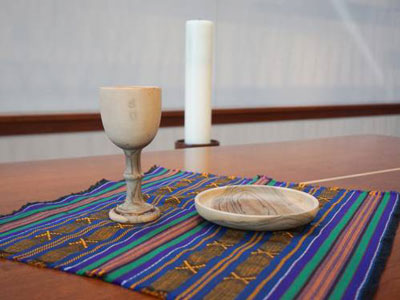 An olive wood chalice, paten and Kinte cloth square used at the 207th General Assembly (1995), the first time that Communion was celebrated by intinction at GA. The olive wood chalices and patens, created by Palestinian refugees in the camps, were obtained from Pal Craftaid, a ministry that continues to assist refugees to earn money today. This set was donated to the Presbyterian Historical Society by Dennis Hughes. (Photo by Emily Enders Odom)

It was nothing less than the gift of his peace as he prepared to complete his own baptism in death.

It was a gift that Hughes said was bestowed upon him by both the “capital ‘S’ Saints—and the living lowercase ‘s’ saints, who have not only shown us how to live but also how to deal with end of life issues and with the way Christians ‘die and rise with Christ’ as a lifelong discipline.”

Hughes’s decision to receive palliative care rather than aggressive chemotherapy after his diagnosis gave him not only a deep and abiding peace that he freely shared with the wider church, but also the energy and ability to finish writing a chapter on All Saints’ Day for a Festschrift honoring Harold Daniels, his dear mentor and predecessor in the PC(USA) Office of Worship.

“It was very special when my case got managed well enough that I was beyond pain,” Hughes said. “I also suddenly discovered that not only did I have energy, but I had an insight into what the saints have revealed over the years about living into their death and their manner of dying—it’s a part of the story.”

The retired pastor, scholar, mid-council and denominational leader honored his commitments to church and family and looked lovingly and gratefully to his wife, Ann—a registered nurse and health care administrator for over 35 years—who headed up his “first team” of caregivers, namely his family. They were supported by oncologist Edmond Marzbani, and the staff of Evergreen Hospice in Kirkland, Washington.

Hughes said he was grateful, too, for the words he heard running through his mind the morning after his diagnosis. Words of the mystic Julian of Norwich that were with him every day.

Gracious God, thank you for testimonies of your life-changing power at work in the world. Continue to empower your church to proclaim the good news of Jesus Christ, so that all may receive the abundant life he freely offers. Amen.