Access to health services, treatment and prevention are keys to success

In the Democratic Republic of the Congo, a struggling economy along with the deteriorating effects of time and tropical weather make even basic health care inaccessible to the vast majority of its citizens. 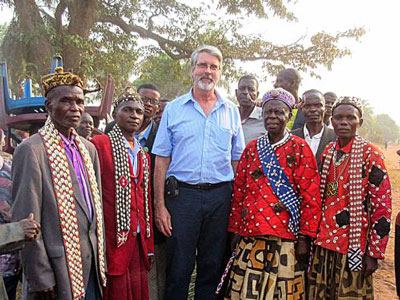 PC(USA) mission co-worker Larry Sthreshley (center) is with Chief Kibulungu and sub-chiefs from Kibulungu, a large village on the road between Nyanga and Tshikapa in the Democratic Republic of Congo. (Photo provided)

Presbyterian World Mission co-worker Dr. Larry Sthreshley is one of many people working to make health care more accessible in the region. He serves as Congo Country Director for IMA World Health and oversees the Access to Primary Health Care Project (ASSP), which provides basic health care to 10 percent of the health zones in the Congo. The aim is to better address care for ills such as malaria, pneumonia, diarrhea, malnutrition, obstetric and neonatal care, family planning and immunizations, along with water, hygiene and sanitation.

As a health liaison, Sthreshley assists with the development of the health ministries of churches and their role in the health system of Congo. He works to design and manage comprehensive health programs that work from the community level up through the ministry of health.

The ASSP project, funded through UK Aid, is so successful it was recently praised in a report to the Parliament of the United Kingdom.

“We are particularly impressed with the implementation of the ASSP program by IMA World Health,” the report said. “This program displays all of the major factors that we have identified in this inquiry as being important to successful aid projects in fragile and conflict-affected countries such as DRC—flexibility, a long-term focus with strong local partners, and resilience.”

Two other Presbyterian mission co-workers are working with health care in the Congo, although not with IMA or the ASSP program. Dr. John Fletcher serves as a surgical consultant, treating patients and helping build capacity of medical staff in the eight hospitals of the Presbyterian Community of Congo hospitals. Dr. Martha Sommers is assigned to the Christian Medical Institute of the Kasai (IMCK) to assist in expanding and enhancing training of Congolese doctors in family medicine.

Inge Sthreshley is also part of that ASSP team. She helps direct the nutrition program, which introduced a specially designed clean burning and fuel efficient stove that promises to reduce respiratory problems and lessen the impact on the environment.

In addition to the toll on the environment from deforestation, the smoke from the cook fires takes a toll on people’s health, particularly women and children who are around the fires daily. The problem is even more exacerbated when the cooking is done inside the home, which is frequent. The smoke is a contributing factor to developing respiratory diseases such as pneumonia, which is responsible for 19 percent of the deaths in children under 5, outranking malaria and diarrhea as the top contributor to child mortality.

The gasifier stove is loaded with small pieces of wood that burn in a low-oxygen environment, igniting wood gases and thereby producing very little smoke once the fire gets going. The end product is charcoal or biochar that can then be used either to cook another meal or used as a soil amendment in fields and gardens.

The Presbyterian Church (U.S.A.) is a founding member of IMA World Health, a faith-based organization based in Washington, D.C. The organization’s mission is to build healthier communities by collaborating with key partners to serve vulnerable people.

The Democratic Republic of the Congo (DRC) is a country roughly one-quarter the size of the United States that has been ravaged by conflict throughout its history. The havoc wrought by 32 years of dictatorship under Mobutu Sese Seko followed by multiple wars and continued pockets of militia fighting have kept this resource-rich country from developing its potential.

King of the universe, you see the faithful deeds of your servants. Bless the work of their hands. We trust in you, Lord of Hosts, friend of the lowly. We bless your mighty name! Amen.