The answer is: ‘Who is Blair Moorhead?’

Blair Moorhead’s recent appearance on the televised game show Jeopardy! was the end of a long process of auditioning. It was also a reminder of valuable life skills for the social worker and candidate for ordination as a teaching elder in the Presbyterian Church (U.S.A.) The Jeopardy! episodes in which Moorhead appeared as a contestant aired January 9 and 10, 2017, although the show was taped last September. The nearly year-long process of getting on the show began with an online test of 50 questions taken in January 2016 followed by a March confirmation of her possible selection. After an in-person interview in April, she was notified of her final selection and the September taping date in Los Angeles. 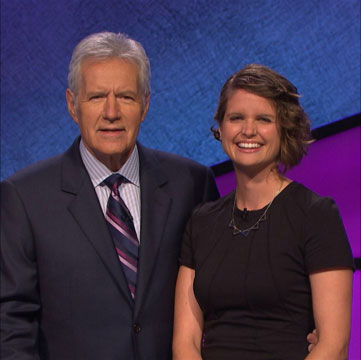 Moorhead had just been hired as a social worker at Community Connections in Washington, D.C., when she received news of the in-person interview. She said the organization was very supportive of her Jeopardy! bid and gave her time off during the qualification process.

The interview not only tested Moorhead’s competency to answer hard questions but ensured she had good on-air presence, could provide answers in the form of a question and could speak about herself with an interesting back story.

“The people who run the show and work with contestants are amazing,” says Moorhead. “They have so much fun at their job and put you at ease—it’s a really fun experience.”

And Moorhead’s back story is an interesting one. Hailing from West Fargo, North Dakota, where she remains a member of Community Presbyterian Church, she attended Princeton University and served as a Young Adult Volunteer (YAV) in Kenya in 2007-2008 before returning to the U.S. to attend Union Theological Seminary. She completed her social work degree at Howard School of Social Work after moving to the Washington, D.C., area where she and her husband now live. She’s an affiliate member of First Presbyterian Church in Arlington, Virginia, and sits on the site coordination board for the Washington, D.C., YAV group.

Along the way, the candidate for ordination in the Presbytery of the Northern Plains also served as a theological student advisory delegate to the 220th General Assembly (2012) in Pittsburgh.

Moorhead’s husband and mother traveled with her to Los Angeles for the Jeopardy! taping, where she was joined by an aunt. The show films five episodes a day and Moorhead was selected for the first game of the morning, adding to her anxiety of appearing on national television. “I was so nervous. I really didn’t want to go on first,” she says. “We’re at the podium and I was so nervous they made me write my name three times because it must have been illegible the first two.”

But once the game got started, Moorhead eased through questions on art history, music and film. Still, she says cramming for geography—not her favorite subject—was something that helped her in the competition.

Moorhead remembers having great success in a category asking contestants to name the person about which a certain song was written. “I love music and said, ‘That’s my category.’ I was getting them and getting them until there was one question—the answer was Justin Timberlake—and I didn’t ring in time and the returning champion—this distinguished professor—got Justin Timberlake,” she laughs. “I was like, ‘No, I wanted that!’”

Caught up in the moment, Moorhead says some of her answers “just came out.” “There were some questions I answered then, that when I watched it on January 9, I said, ‘I don’t know that information anymore. I don’t know when I studied that.’”

Moorhead won over $17,000 as victor of the first round. She was leading in the second round and answered the Final Jeopardy! question correctly, but miscalculated the amount she’d need to wager to secure the win and took second place, claiming the $2,000 consolation prize. Still, she’s pleased with the experience and loved how the show valued each contestant’s story.  She could explain her history within the church and her current work when asked about it by Jeopardy! host Alex Trebek.

“My plan was to build clinical social work skills, like therapeutic skills, before I served a church so I could bring that knowledge base and those skills to a church,” she says of her current role as a licensed clinical social worker. “The second day on Jeopardy!, that was the fun fact Alex asked about,” she says. “He asked about my vocation.  So I got to say, ‘I think mental health and spirituality are very important, and go together.’  I got to say that on national television, and I really do believe that.”

Moorhead encourages others to try out for Jeopardy,! saying her experience was a very positive one and an opportunity to introduce a national audience to someone with a faith calling. “Anybody can take [the online test,]” she said. “I totally recommend anyone who’s even thought about it casually to just take it. There’s no reason not to.”

As for life lessons, Moorhead believes losing as she did provides a perfect platform for learning how to take her own advice.

“I kicked myself for a really long time,” she says of her Final Jeopardy! miscalculation. “The first thing Alex said to me after he walked over to the contestants was, ‘Don’t beat yourself up.’ It was really kind of him; he didn’t have to say that. But I wasn’t in a headspace to accept it.”

As she thinks about Trebek’s advice, she realizes it’s very similar to counsel she offers in her clinical work.

“I have to take the advice I give my clients, which is to focus on the positive and not have the negative be the only thing they think about and ruminate on,” she says. “I had to really remember the highlights and not just the one thing I wish had gone differently.”

“One mistake does not define you,” she says encouragingly, with a self-acknowledging chuckle. “I tell my clients this all the time, and now I had to internalize it. It’s very challenging.”

Father, thank you for our churches. Please help us to welcome everyone as you would. Holy Spirit, please teach us how to serve together in generations. In Jesus’ name we pray. Amen.