Donation is ‘a wonderful surprise’

Unexpected gifts from the Synod of the Sun will benefit two national agencies of the Presbyterian Church (U.S.A.). The gifts are being hailed as representing an affirmation of partnership among Presbyterians at all levels of the denomination. 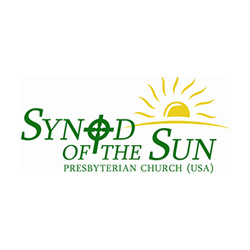 The Synod of the Sun, which includes presbyteries in Texas, Oklahoma, Arkansas, and Louisiana, voted in February to make unrestricted gifts of $2,500 each to the Office of the General Assembly (OGA) and the Presbyterian Mission Agency (PMA).

“It was totally out of the blue, but a wonderful surprise,” said Kerry Rice, director of Ordered Ministries and Certification for OGA.

Rice said it’s the first time in his memory that a synod has made such a donation.

Rosemary Mitchell, senior director for Mission Engagement and Support for PMA, praised the synod for its “thoughtful gift,” noting that the unrestricted (undesignated) nature of the donation is especially significant.

“Unrestricted giving is what gives PMA the flexibility to respond to emerging needs,” she said. “It supports things people care the most about right now.”

Mitchell explained that emerging needs might include addressing issues around racism, helping the church engage in the public square, and supporting the collaborative work of PMA and OGA to respond to the refugee crisis.

Valerie Young, acting synod leader and stated clerk of the Synod of the Sun, said the idea of making the gifts emerged during a leadership retreat in January. The purpose of the retreat, she said, included “reminding ourselves why we do what we do as a synod.”

At the retreat, Sallie Watson, general presbyter of the Presbytery of Mission, announced that her presbytery would be giving the synod a portion of the funds the presbytery had received from a congregation that was leaving the denomination. The gift was to be unrestricted, and it was “over and above what they had budgeted to give to the synod,” Young said.

Synod leaders also realized that making an undesignated donation to the national church would enable them to put into practice something they had long been preaching to people in the pews.

“I’ve been working for the synod for 13 years, and I don’t recall the synod ever making such a gift,” Young said. “How can we as synods and presbyteries ask our people to do something that we’ve never done ourselves?”

Though relatively small, Young said, the $2,500 gifts are symbols of an important truth: “We may not always agree with certain things that happen in the church, but we’re all in this together, and we want to be as supportive as possible to the denomination.”

To Rice, the gifts symbolize the structural ties that bind Presbyterians together. “This says that the connectional system still has meaning.”

Rice said no decision has been made by OGA about how to use the synod’s gift, but he has proposed putting the money into the work of mid councils. “That would seem to honor the source of the gift,” he explained.

However, the gifts are used, Young hopes they reinforce the following affirmation written by Synod of the Sun leaders at their retreat in January:

“We believe when we work together across boundaries, we make visible the Good News and find wholeness as the Body of Christ. In our common calling, we impact lives together.”

Today’s Focus:  Synod of the Sun

Synod of the Sun Staff

God of wholeness, may the world you intend be the one we seek. May the way you love be the way we love, so that even broken hearts pulse with your grace. Amen.