The questions come in the darkness, usually around 3 a.m.

“What will my children’s lives be like without me?” wonders Farm Church co-founder Ben Johnston-Krase.

Three years ago, at about the same time of night, he received a dream that he was going to start a church in a place where there was nothing but a farm. His main concern at the time was where Farm Church would be. “Where will my three daughters (then ages 6, 8 and 11) go to school?” he wondered.

But now Johnston-Krase is facing a new reality. Four months ago he was diagnosed with Stage IV lung cancer.

In Durham, North Carolina, where Farm Church is located, the prestigious Duke Cancer Center is treating him with targeted chemotherapy. He is on a drug that has shrunk multiple tumors in his lungs, lymph nodes, neck and abdomen down to nothing. Eventually, the cancer will return, which usually happens after one to three years. After the cancer develops resistance to the drug, he’ll be treated with a new one.

Johnston-Krase is grateful to have access to such incredible health care — he feels better now than when he was diagnosed — but the cancer is taking its toll emotionally.

“I’m in this thick soup of grief, which includes despair and gratitude,” he said. “Both are full force. They don’t cancel each other out.”

In less than two years, Farm Church has wildly exceeded Johnston-Krase’s expectations. The church has already given away thousands of pounds of food, and 80 Farm Church participants are starting a fourth garden space this spring. On Sunday morning, as part of their worship, approximately 40 to 50 people work the land together.

Ben Johnston-Krase with his family (from right to left), daughters Sylvia, Ezgihaye and Meheret, and wife Karla. (Photo provided) 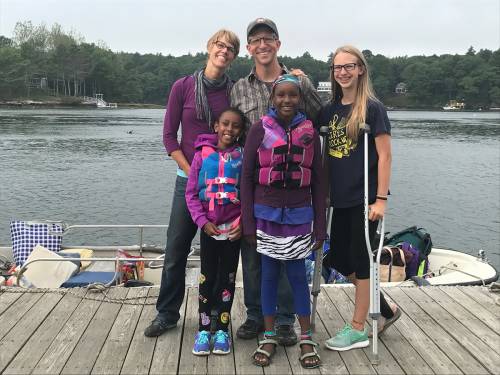 When Johnston-Krase left his established pastorate at First Presbyterian church in Racine, Wisconsin, to follow his dream of starting a church with no steeples or buildings, Presbyterian News Service asked him a question: “What about financial security for your wife and children?”

He remembers his answer, one that he repeats to himself now over and over.

“I told you I wanted food, shelter and love for them,” he said, “but that I also wanted them to know that dreams are worth following. That risks are worth taking. That if the Holy is calling you to do something, you can trust it and say yes.”

Johnston-Krase knows that regardless of what happens to him or Farm Church, it will be part of his children’s story “for the rest of their lives.” He is thankful he was diagnosed after starting Farm Church and not before, because he knows he is where he needs to be, doing what he hoped and dreamed about.

Sometimes when he thinks about getting to start Farm Church, the family he has, or even walking his dog, Johnston-Krase is overwhelmed by it all.

“My life has been good and amazing, terrible and terrifying,” he says. “But that doesn’t mean it isn’t beautiful.”

His diagnosis is teaching him the truth of what Frederick Buechner once wrote in Whistling in the Dark.

The Presbytery of New Hope created a Farm Church position so he could be covered by the Board of Pensions of the Presbyterian Church (U.S.A.) with full medical, death and disability benefits. His salary and benefits package is being funded through gifts made to a Live Into Hope fund.

“I wouldn’t wish this diagnosis on anyone,” he says, “but I wish everyone could know what it feels like to have the universe catch you and support you.”

Johnston-Krase is writing about his experiences of living with cancer at practiceresurrection.com, which is the final line from the Wendell Berry poem Manifesto: The Mad Farmer Liberation Front.

Ironically, he bought the Practice Resurrection domain name before his diagnosis. As he was doing some church consulting he began to realize it wasn’t meant to be simply believed in or hoped for. Instead, resurrection was meant to be practiced.

“Which happens in our minds,” he says. “As we learn to live each precious moment.”

Living God, we thank you for the opportunity you have given, the means you have provided, and the desire you have created in us to use the skills you have blessed us with to provide for and encourage those who are suffering. Please continue to give them courage. In Jesus’ name we pray. Amen.