Korea YAVs share highlights from their year of service 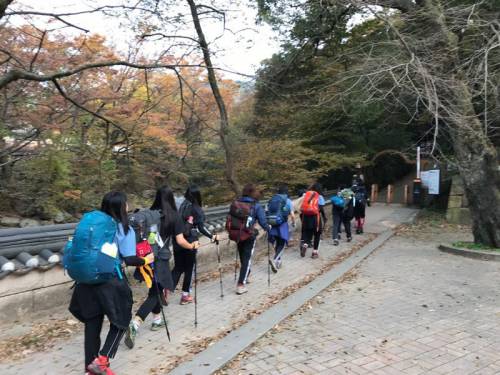 Student begin a four-day trek to the top of the first national park in South Korea. (Photo courtesy of Susannah Stubbs)

Living in intentional Christian community has been looking different for Young Adult Volunteers (YAVs) in South Korea. The Presbyterian Church (U.S.A.)’s two Korea YAVs — Susannah Stubbs and Amanda Kirkscey — have lived in a school dormitory and a church guest house instead of the previous site model where they lived together, next door to the YAV site coordinator.

“Korea YAVs are exploring intentional Christian community alongside the Korean partners with whom they are living and working this year,” said Hyeyoung Lee, YAV site coordinator in South Korea. “This way, YAVs will rely upon their partners as guides and teachers from whom they will learn about life in Korea.”

Lee said the YAVs will learn much from their partners through community immersion, from simple things such as where to buy city-approved trash bags to understanding what it means to live in one of two countries divided in 1945.

The new form of intentional Christian community means YAVs will need to be more proactive in asking questions of their Korean partners, Lee said, and learning from their newly adopted community. Ministry partners are also becoming more active partners with the YAV program in Korea as a result of this new housing model.

Young Adult Volunteer Susannah Stubbs earned her bachelor’s degree in creative writing from Hendrix College in Conway, Arkansas. Stubbs, who is also a singer-songwriter, sees writing as a tool to help people claim their own stories and develop understanding and compassion for the stories of others.

Stubbs recently joined some of the third-year students at Late Spring School on their end-of-year journey to climb the highest peak at Jirisan National Park in South Korea. The teacher, 11 students and Stubbs had all completed shorter hikes to prepare for this four-day trek of more than 23 miles.

In order to advance to the next grade after winter break, the students were required to complete the entire Jirisan course, as well as additional reflections and a presentation. Despite anxiety, upset stomachs and the huge physical challenge before them, the 13 adventurers communicated in a mixture of Korean and English as they bonded over the shared aches in their legs.

“Getting to be part of the community at Late Spring School has been great,” Stubbs said. “The nature is beautiful, and the community is beautiful, too — it’s founded on the ideas of the Rev. Moon Ik-Hwan, who fought long and hard for the reunification of Korea.”

Amanda Kirkscey, a graduate of Texas A&M University with a degree in marketing, previously served two years as a Global Mission Fellow in Frankfurt, Germany prior to her YAV year of service in South Korea. Her mantra for the past several years has been “Love God. Love People. Serve the World.” She is passionate about human rights and spreading the love of God through relationships.

The Korean-English language differences are a challenge, yet Kirkscey is learning ways to communicate with others at Jumin Church and in her work placement at the Welfare Center. Each day the meal team provides small, generous, compassionate acts of service, like serving lunch to about 100 elderly people in the community.

“Part of the YAV program is ‘Embracing the Ambiguity,’” Kirkscey said. “At first, I thought this meant not having a set schedule, not being told where you’re going when you get in a car, not understanding instructions.”

More importantly, she wrote, it also means “being open and engaging. Trying. Allowing your actions to speak for themselves and trusting that other people have good intentions behind their actions as well.”

Gracious God, thank you for human connection as a window into your ways. Help us carry each other’s burdens. Strip away the barriers we build to protect ourselves from being vulnerable. We pray in Christ’s name. Amen.