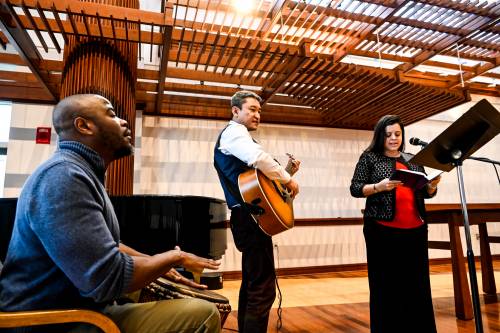 A recent morning worship service at the Presbyterian Center in Louisville opened with a powerful beat of the djembe, a West African drum, played by the Rev. Dr. Alonzo Johnson, coordinator of the Self-Development of People ministry for the Presbyterian Mission Agency (PMA).

The Rev. Samuel Son, the PMA’s manager of diversity and reconciliation, was the preacher for the service. Drawing on Luke 13:10–17 — Now he was teaching in one of the synagogues on the sabbath. And just then there appeared a woman with a spirit that had crippled her for 18 years. She was bent over and was quite unable to stand up straight… — Son titled his message “Jesus, the First Stand-Up Comic.”

“Jesus as a stand-up comedian,” said Son. “I know what you’re thinking — that’s sacrilegious! Is it sacrilegious or do we not know what comedy is? Jesus had a way of telling truth that made people laugh. Maybe we think it’s sacrilegious to put Christ and comedy in the same sentence because we have the wrong notion of comedy and of Christ,” he said.

“When I say Jesus was a stand-up comedian, I mean Jesus had a way of being truthful, a way of speaking truth that made some laugh and some angry,” said Son.

“Jesus has the stage alone, there are hecklers, and Jesus lays a mean burn on the hecklers. He does it with a joke, and the crowd laughs, and the laugh empowers,” Son said.

“Here’s a woman who has been crippled for 18 years. People have shunned her. She has internalized that rejection,” he said. “She lives her life in the shadows; she hears this great storyteller; he makes her laugh; he makes her believe the possibility that maybe God hasn’t shunned her.”

Son added that Jesus calls the woman out into public not to shame her, but to remove her shame. “Jesus’ point was not just the miracle but to dismantle the way people oppress through the division of acceptable and unacceptable, the public and shameful. Preachers go up to the pulpit and there are clear expectations of what preachers can say and how the congregants should behave. In comedy, everything is material. Comedy overcomes shame through laughter, but that overcoming of shame is a liberation from oppression.”

“A comedian has two tools; one is the right words,” he said. “The right word is the most honest and truthful word. The humor is not in exaggerating but exposing the exaggeration in the situation. The second tool is the punchline. The punchline is the surprise. In a punchline there is always a set-up.

“On Sabbath you take care of your ox and donkey by giving it water, but you won’t take care of a daughter of Abraham.

“A punchline works when it’s unexpected. And it gives you a new way of seeing things. In a way, a punchline is always a revelation.

“There’s the set-up. And there’s the punchline. And everyone knows a punchline is coming, but still the punchline surprises you. A great comedian delivers great punchlines. You see how great Jesus is with his punchlines in his parables.”

Son said that “the Matthew 25 parable is a great punchline, but Jesus’ greatest punchline was not delivered by words but by his life. This punchline works because Jesus himself was the punchline! The punchline comes three days later when Jesus rose from the dead and sorrows turned to laughter.”

Everloving God, thank you for your son, Jesus Christ, and the gifts he has shared with the world. Amen.