With the help of partners, Iowa church was ready when an immigration crisis erupted 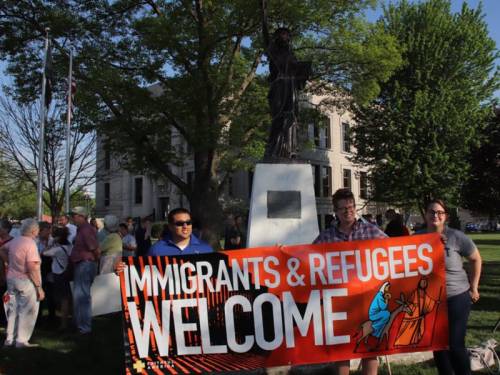 Mount Pleasant is a community of fewer than 9,000 people. It has an idyllic town square surrounded by restaurants and local businesses, just like one would expect when picturing small-town Iowa.

That image changed on May 9, 2018, when dozens of men were seized from Mount Pleasant’s Midwest Precast Concrete plant by Immigrations and Customs Enforcement (ICE) agents.

Fear was rampant across the town as a helicopter flew over the factory. Stories of high school students leaving school to check on their fathers or mothers driving to elementary schools to pick up their children were both true and false — real for some and an exaggeration for others. People were scared. They wanted answers, but officials weren’t talking. By nightfall, First Presbyterian Church in Mount Pleasant was crowded with individuals trying to make sense of it all.

“It was a very traumatic evening,” said Tammy Shull, chair of IowaWINs (Iowa Welcomes its Immigrant Neighbors, a community commission of First Presbyterian Church). “We had families crying, not knowing what happened to the men.”

According to the Rev. Trey Hegar, pastor at First Presbyterian, 75 people were initially rounded up during the raid, with 32 eventually detained — 22 from Guatemala, and the rest from Mexico, El Salvador and Honduras.

“ICE wouldn’t release names,” Hegar said. “It took us two weeks to identify who was taken and that’s only because we had the families here telling us that their loved ones hadn’t come home.”

Mount Pleasant isn’t the first community to be shaken by an ICE raid and it likely won’t be the last. What sets this community apart from others is the legwork that was done prior to that day.

This includes First Presbyterian’s establishment of an online giving fund with the Presbyterian Foundation, which allowed the church to collect donations, particularly after the raid. Additional support for this important work has come from other organizations in the Presbyterian Church (U.S.A.), including Presbyterian Disaster Assistance, which made grants to the Presbytery of East Iowa, and Presbyterian Women. Between the donations, fundraising, grants and other sources, almost $350,000 was collected for assisting refugees and immigrants in the area. 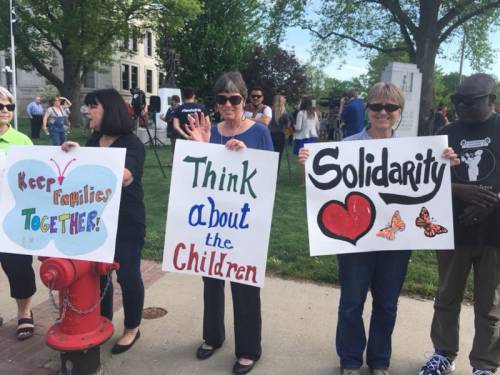 The vision for IowaWINs is for Mount Pleasant to be “and inclusive and hospitable community that welcomes people from across the world looking for a new home.” (Photo courtesy of IowaWINs

After the raid happened, “because of all the connections we made through IowaWINs, we were able to reach out to all of those contacts to bring resources to the church and start helping these families,” Shull said.

This meant utilizing translators to gather and share information and working with immigration lawyers to identify where the men were located — which turned out to be multiple locations in Iowa, as well as one in Wisconsin and another in Illinois. Representatives from the Eastern Iowa Community Bond Project were there to explain what needed to be done to get the bond-eligible men out of jail.

Hegar said money donated to the church was not used to post bond. Instead, funds came from other sources.

Twenty-four of the men arrested that day were reunited with their families; the remaining were deported. Yet despite their release, the men were not granted new work permits.

To help, IowaWINs used the donations it received to set up an account for each family to assist with rent, utilities and legal fees. The church also opened a food pantry because of all the items it received the day of the raid and continues to receive from donors.

As donations to IowaWINs drop off, the organization is focused on sustainable efforts, launching Nutrimos last year. Nutrimos falls under the IowaWINS umbrella. Its leaders hope it can become a sustaining ministry so IowaWINs can move beyond the response to the ICE raid to a broader program for immigrants in the community.

Nutrimos “means ‘We nourish’ in Spanish because we will nourish people with food and opportunity,” Shull said.

If your congregation is interested in helping refugees and immigrants, a place to start is the Community Organization Workbook. The workbook is available at iowawins.net/our-story.html.

In the section about online giving and social media, Hegar stresses the importance of an online donation link, citing the church ministry weblink through the Presbyterian Foundation.

“It really gave us a home base online,” he said.

Dear God, we praise you and give thanks for all that you have given us. May we share our abundance with others in your mission to this multicultural world. May we welcome and celebrate your rich diversity. Amen.