Editor’s note: The film “A Beautiful Day in the Neighborhood” has rekindled the nation’s appreciation for Fred Rogers, the best-known Presbyterian clergyperson since John Witherspoon. In 1997, Eva Stimson, then editor of Presbyterians Today, interviewed Rogers. 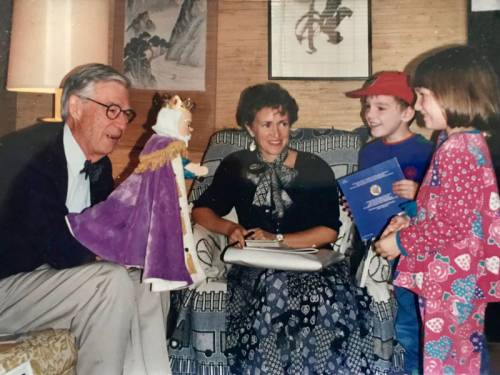 In 1997, Fred Rogers sat for an interview in the studios of WQED in Pittsburgh for an interview with Eva Stimson, then the editor of Presbyterians Today. Receiving an in-person visit from King Friday XIII are Stimson’s children, Rachel and Luke. (Photo by Jerry Van Marter)

Anyone with kids and a television set knows Fred Rogers. Three generations of children have grown up with “Mister Rogers” — the friendly sweater-and-sneakers-clad grownup who talks frankly about feelings and invites them to be part of his TV “neighborhood.” What is less widely known is that Fred Rogers is a Presbyterian minister, ordained in 1962 by Pittsburgh Presbytery.

Early on a Monday afternoon America’s best-loved neighbor is catching up on stacks of correspondence in his office in downtown Pittsburgh, following a quick trip to Toronto. Just before a scheduled interview he squeezes in time for a carton of yogurt.

Then he appears, smiling and relaxed, to ask, “What do you want to talk about?” For the next hour his comments emerge thoughtfully, deliberately, graciously — just like on TV.

It is not hard to imagine this man giving up his lunch break for eight years to take Bible and theology courses. “It’s fairly unorthodox to go to seminary on your lunch hour,” he says. “Which is what I literally did.”

That was back in the 1950s. Rogers had just begun working for WQED in Pittsburgh, the nation’s first community-supported public television station. He had planned to go to seminary right after college but got sidetracked by a call to work in television. A few years later seminary became a way of undergirding this call — to minister to children and their families through the media.

In the early 1960s, Rogers recalls, national media staff in the United Presbyterian Church in the U.S.A. began talking to him about developing a children’s TV program as an outreach for the denomination. But then priorities shifted and money for the project evaporated. Did the church miss a big opportunity?

“It’s hard to say,” commented Gregg Hartung, executive director of Presbyterian Media Mission and a personal friend of Rogers’. “I’m not sure a ministry like Fred’s could be done within an institution.” If a church-Rogers partnership had come to fruition, the PC(USA) might be known today as a trailblazer in TV evangelism. On the other hand, the constraints of working within a church bureaucracy might have had a stifling effect on Rogers’ creativity.

In 1962 Pittsburgh Presbytery ordained him with a charge to continue his work with children and families through the media. He has never served in the traditional role of pastor, but through television he brings his simple message of affirmation and acceptance to a “congregation” of millions.

On TV and in person Rogers comes across as refreshingly genuine. His gracious “Mister Rogers” persona is not an act, says Hartung. “It’s really, truly Fred.” His affirmation of the goodness in people elicits powerful responses from adults as well as children.

Being a good listener is a vital part of ministry, especially ministry with children, Rogers believes. He cultivates his own listening skills by integrating silence into his life as a daily spiritual discipline. He says he has been profoundly influenced by the devotional writings of the late Roman Catholic priest Henri Nouwen, who was also a personal friend. “Silence is becoming more and more of a luxury,” he remarked. “I’d encourage everyone to have more quiet time.”

Nurturing children in the Christian faith is a challenge in today’s world, Rogers acknowledged. He still is appalled by many of the things kids are exposed to in the media, such as situation comedies in which the lines spoken by child actors “are invariably smart-aleck remarks and put-downs.”

Rogers bases his work with children on the maxim, “Attitudes are caught, not taught.” The best way to cultivate faith in children, he says, is to “share our own enthusiasm about what we believe.”

The most important thing the church can offer children, he adds, is “a place where they know it’s OK to be a child.” This means stocking church school rooms with age-appropriate furniture and toys. It means allowing time in the worship service to “appreciate what children might have to give.”

Jesus welcomed children and so should the church, Rogers believes. In fact, he says thoughtfully, flashing one of his trademark smiles, “I think Jesus delighted in the presence of children.”

God our Creator, we give you thanks that you are always with us: to guide us in celebration and mourning, to cultivate and nurture our growth, and to encourage us to extend ourselves to others in your name. Remind us that you are here, and help us trust you. Amen.