Documenting the Church’s role in peacebuilding 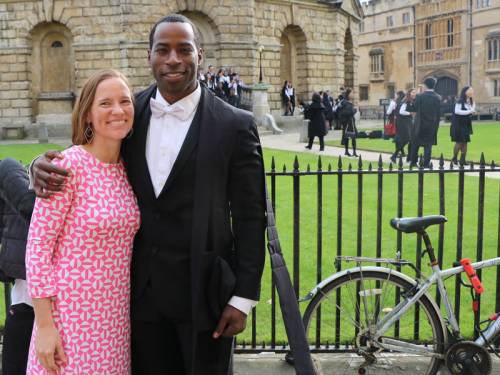 The Revs. Nancy and Shelvis Smith-Mather are pictured at Oxford University, where Shelvis is studying for graduate degrees using research he’s completed over a decade as a Presbyterian Church (U.S.A.) mission co-worker. (Contributed photograph)

For the Rev. Shelvis Smith-Mather, the road to the majestic halls of Oxford University took a journey of nearly a decade and three continents. But it is, he says, a “crazy, wonderful, beautiful story.”

Shelvis and his wife, the Rev. Nancy Smith-Mather, have been Presbyterian Church (U.S.A.) mission co-workers for more than a decade. First, they served as Young Adult Volunteers in Kenya, and then as mission co-workers in South Sudan and Uganda. He served as principal of the RECONCILE (Resource Center for Civil Leadership) Peace Institute, while Nancy focused on overseeing the South Sudan Education and Peacebuilding Project.

One of the RECONCILE objectives is to conduct research and document cultural values that promote tolerance, reconciliation and coexistence among people of different backgrounds. From the beginning, Shelvis was interested in doing research about the role of the Church in peacebuilding and reconciliation efforts.

In 2012, he wrote a proposal to the University of Aberdeen’s Theology Department and found a faculty member interested in supporting his research.

He officially started the research in 2013. During that time, the professor from Aberdeen left the university, and Shelvis suspended the research for several months. He restarted the program in 2013, but the outbreak of civil war led to the Smith-Mathers being evacuated out of South Sudan weeks before the start of his field research.

When the couple was ready to return to South Sudan, RECONCILE advised them to stay in the U.S. because their community, Yei, was still unstable. Instead, the organization asked the couple to travel the U.S. and speak to as many people as they could to raise awareness about the conflict and ask for prayers.

The Smith-Mathers later returned to South Sudan and he continued to collect stories. He talked with the RECONCILE staff, along with soldiers and refugees, not knowing how the research might be used. For the next few years, the focus was on developing the RECONCILE Peace Institute, but he did research sparingly with Aberdeen.

In 2016, they received the news that the third professor assigned to this project was leaving Aberdeen.

Shelvis searched for another university to take on the project.

In 2017, he traveled to England to attend a meeting of the Conflict Research Society, a group of academics and practitioners engaged in issues of peace around the world. 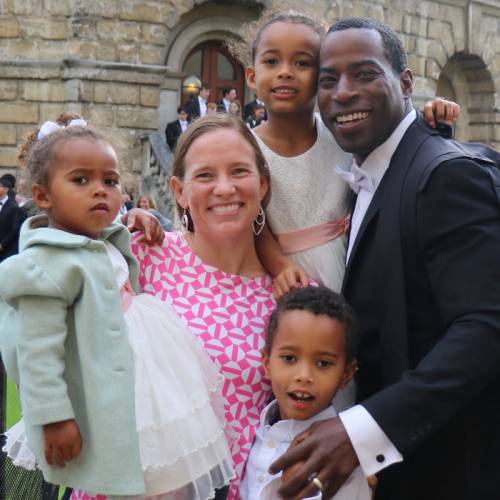 The Smith-Mather family is pictured at Oxford University, where the Rev. Shelvis Smith-Mather, who along with his wife spent more than a decade as mission co-workers, plans to earn two graduate degrees while developing curricula based on his research. (Contributed photograph)

Smith-Mather said the Church is a critical part of the peace process. Church leaders are so well-respected, and the institution is held in such high esteem that it is an essential part of this nation’s development.

“It’s hard for people in South Sudan to talk about the story of their country without talking about the role of the Church. When South Sudan became a country there were only five miles of paved roads. It’s the Church that has been developing hospitals and schools. When international NGOs get evacuated out, it’s the South Sudanese Church leaders who stay and make sure that internally displaced people are being fed. When you have these conflicts, it is the Church that invites people to reimagine what it would look like to live together and talk about forgiveness,” he said.

Leaders of the South Sudan Council of Churches and U.N. poet laureate Bishop Paride Taban wrote a joint letter of recommendation for Shelvis to attend Oxford.

Finally, a social anthropology professor saw the project and reached out to him.

Smith-Mather felt for the first time that he might actually realize his dream.

He began a four-year program at Oxford last fall to study the role of the Church in peacebuilding. During the first two years, he will work on his master’s degree, the third year on research in South Sudan and during the fourth year, he will write and present his dissertation.

But what really excites him is being able to share his what he learns, curricula he might develop and his contacts with the people of South Sudan, a country he says his family is inextricably linked to.

“While I wish the journey had been much shorter, I know there is acceptance and commitment now and I’m so excited to be here representing PC(USA), RCA (the Reformed Church in America) and our South Sudan partners,” he said.

Creator God, we thank you for your presence with us on this life’s journey. If we need support, help us, Lord, to ask others for assistance. Amen.