Join the liberating movement of love

APCE preacher, plenary speaker encourages worshipers to use the public arena for justice 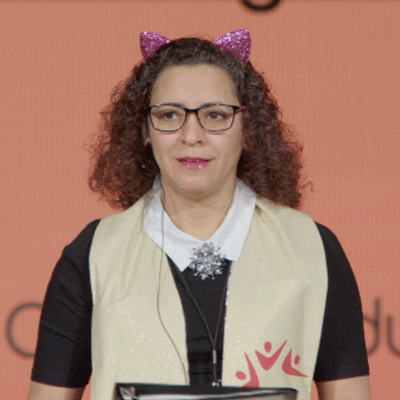 To set the stage for her “Circles of faith, Circle of Empowerment” message from Hebrews 11:23-28, the Rev. Dr. Lis Valle-Ruiz proclaimed during the recently renamed Association of Partners in Christian Education conference that attendees were going to experience the Holy Spirit throughout their whole body.

As digital flames of fire appeared as a backdrop, Valle-Ruiz, director of community worship at McCormick Theological Seminary, encouraged conference-goers meeting in Chicago to think of the person they identified with the most among the heroes of faith mentioned in Hebrews 11.

And as these words of music, “Circle of faith, circle of empowerment” began to fill the air, Valle-Ruiz encouraged worshipers to write that name down, then find new member of their tribe to share it with.

Valle-Ruiz wondered aloud if the Israelites wandering in the desert were like the people in the room, talking the whole time, laughing, or complaining.

With that, Valle-Ruiz told those in attendance they would have to move again. But first she directed their attention to Hebrews 11:24–25, which states, “Moses refused to be called a son of Pharaoh’s daughter, choosing rather to share ill-treatment with the people of God than to enjoy the fleeting pleasures of sin.”

“In the social-political scale of things, Moses chose to go down,” she said.

According to Valle-Ruiz, the preacher in Hebrews is telling his audience — and us — that in dangerous, difficult times, we need to stay in the struggle.

Maybe, like Moses, we are being called today to step down and stay the struggle, she said, in a movement of liberation that plays itself out in vulnerable situations.

Using the story of Bree Newsome, who was arrested in 2015 for scaling a flagpole outside the state capitol in Columbia, South Carolina, and taking down the Confederate flag that flew there, Valle-Ruiz said,

“That morning, this Black woman woke up knowing she could die.”

But another activist, a white man, was hugging the pole as law enforcement officers arrived to force Newsome down. The officers chose not to put him at risk, allowing her to come down with the flag before arresting them both.

“He wasn’t there to climb the pole or be the hero,” Valle said. “Who is the unnamed hero of faith that you know?”

Think of the names people don’t remember, she said, the ones who go down in social-political terms to help others.

Valle-Ruiz challenged worshipers to think of a group of people they could join to enter into the struggle for liberation. “We need to liberate ourselves from the illusions that we can be the hero who empowers people,” she said.

Only God has that kind of power. The giver of faith, she said, empowers each person. But too often our systems take that power away from people.

“Our job is to take a step back so that others’ power can be seen,” she said, “power they’ve had from the very beginning. Write down the name of the village you know that you can commit to not as a hero but unnamed member.”

During the plenary, the Rev. Russ May, co-founder of an intentional Moravian Community, Anthony’s Plot, in Winston-Salem, North Carolina, shared the story of Minneapolis firefighter Genevieve Hansen.

“We got a lot of work to do if we want to empower our circles for the kind of love Jesus talked about, which gives its life for another,” the Rev. Russ May, co-founder of an intentional Moravian Community, Anthony’s Plot, in Winston-Salem, North Carolina,  said. Referencing a Cornel West quote, May added that “justice is what that kind of love looks like in the public arena.”

“Friends, we’ve got a lot of work to do, if we want to empower our circles for that brand of love … as justice.”

Today’s Focus: APCE – use the public arena for justice

Dear Lord, thank you for the blessings brought to the many who have been called to serve your mission. We pray that you would bless them throughout their lives as they serve others in Christ, in whose name we pray. Amen.